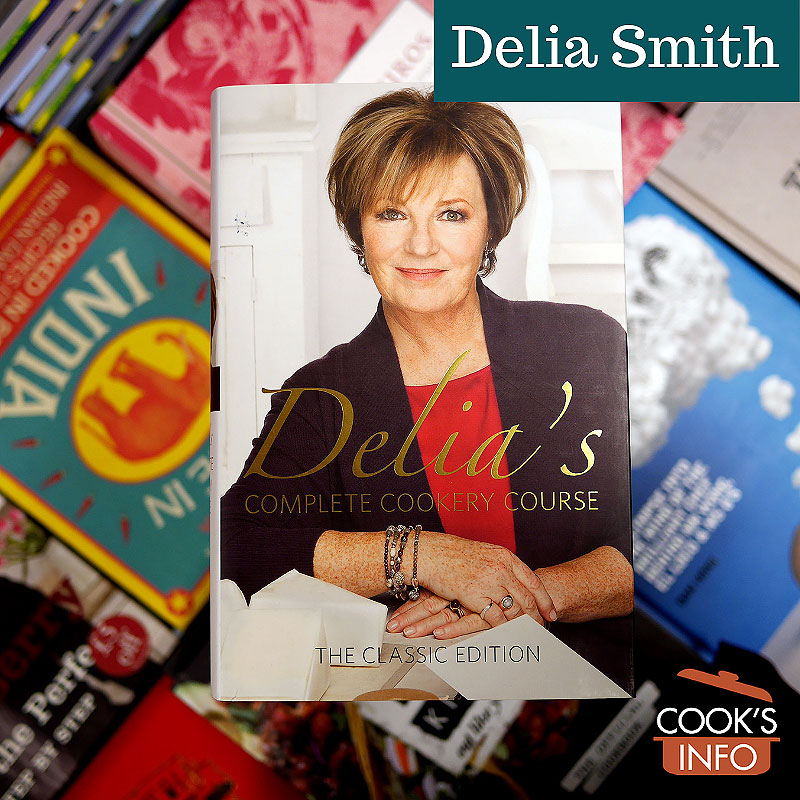 Delia Smith is a well-known, almost iconic, food writer in England, but remains largely unknown across the Atlantic in North America.

She focusses on English classics, while being open to new approaches and ingredients. Her focus has mostly been to raise the fundamental standards of everyday cooking by educating people about the basics, step by step. Her word became law on how to do particular tasks in the kitchen. “Doing a Delia” is a phrase that means you are doing something exactly as she had instructed it to be done. When she recommend a food or kitchen item, supermarket shelves get ransacked for it throughout England.

Delia is always dressed neat, plain and tidy on TV. In fact, some describe her as looking like a grown-up Head Girl from school, and building on her being a Catholic, others call her “Saint Delia.” But the saint image isn’t sexy, in a day and age when food presenters are increasingly so, so she has tried to shake it off. In September 2000, she said, “I am not some prim Brownie pack leader. In fact I am a bit of a bitch.” And her fellow food star, Anthony Worrall Thompson, called her the “coldest woman on television.” In response, she said that he was “dreadful and repulsive.”

Together with her husband Michael Wynn Jones, she created a company called New Crane Publishing Limited, of which he was the Managing Director. She and her husband later sold the company, and became large shareholders in the Norwich City football club in Norwich, Norfolk. The couple have no children; they live near Stowmarket, Suffolk (as of 2007.)

Delia was born 18 June 1941 in Woking, Surrey. Her mother’s name was Etty Smith. Delia grew up in Bexleyheath, Kent and went to Bexleyheath School there.

In 1957, she left school at the age of sixteen without a single qualification. She trained as a hairdresser, then worked in retail as an ordinary shop assistant, then worked at a travel agency.

In 1962, at the age of twenty-one, she got a job in a small restaurant in the Paddington area of London called “The Singing Chef”, owned by Leo Evans. She washed dishes and and served tables. [1]”I used to have a mini-skirt on. If I did waitressing and I couldn’t pull the cork out of the bottle, I would put it between my ankles like this – and I used to get told off because I had a mini skirt.” — Delia Smith: boss told me off for short skirts. London: Daily Telegraph. 4 January 2010.That got her interested in food. She started studying cooking books at the British Museum.

Delia had been baptized Church of England, had gone to Methodist and to Congregationalist churches, but in 1963 at the age of twenty-two, she converted to Catholicism.

During the mid 1960s, she boarded with a family on Harley Street in London.

In 1969, Delia became a food writer for The Mirror in London. Her first column gave recipes for cheesecake, beef in beer, and kipper pâté. The deputy editor was a fellow from Wales named Michael Wynn Jones (born approximately 1942.) In the same year, she baked a cake which was used on the album cover of the Rolling Stone’s eighth album, “Let It Bleed.” [2]”I was just a jobbing cook who did food photography for advertising. It was just a phone call saying ‘Come to the studio, we need a very gaudy cake’. I didn’t know what it was for.” In “Delia Smith awarded CBE.” London: Daily Telegraph. 20 November 2009. 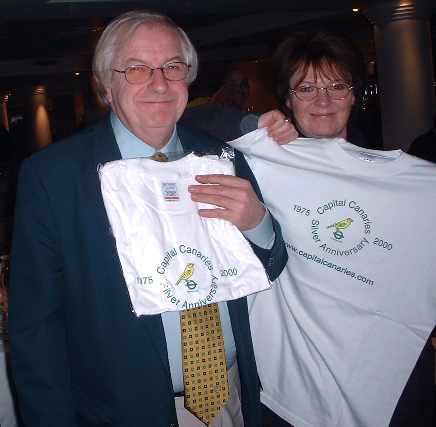 In the same year, 1971, she published her first cookbook, “How to cheat at cooking.”

In 1973, Delia started teaching cooking on a TV series for BBC1 called “Family Fare.” The series ran until 1975. Around this period, she also became a food columnist for the BBC’s Radio Times, which she continued until 1986, and got a job helping to make a TV food commercial. Just before they started filming the commercial, she stepped in and whipped up a pie when one needed for the shoot was dropped on the floor.

In 1978, Delia did the  “Delia Smith’s Cookery Course: Part One”, through BBC Further Education, on TV and through accompanying books. The “course” went on to have three parts.

In the 1980s, Delia published a string of books.

In the 1990s, there was no book or TV programme she could do that wouldn’t be a huge success, often breaking sales records. In 1990, Delia gave viewers a recipe for “truffle torte” that called for 5 tablespoons of liquid glucose. Within days you couldn’t find liquid glucose anywhere in the UK.

In the same year, Delia did the programme, “Delia Smith’s Christmas on TV.”

In 1993, Delia started consulting for Sainsbury’s grocery stores. She and her husband established “New Crane Publishing Limited.” Through it, in May 1993, they launched Sainsbury’s (Food) Magazine for the store. This formal, frequent association with Sainsbury’s lasted until 1998. In the same year, she did “Delia Smith’s Summer Collection” on BBC 2, a ten-part series. The photography for the accompanying book was actually done in Provence by Peter Knab at his placed called “Le Baou d’Infer” twenty minutes outside of St. Tropez, where the light was more dependable. Delia was present, with her food stylist doing most of the cooking. Peter Knab would later do the photography for the Winter Collection as well.

In 1995, she did the “Delia Smith’s Winter Collection”, a twelve-part series on BBC 2 TV, along with an accompanying book. In “Winter Collection”, she mentioned cranberries, causing a run on them across the UK, with sales spiking up by 30%. In the same year, she received the Order of the British Empire from the Queen.

In 1998, Delia launched her “How To Cook” ten-part series on BBC 2, taking everything back to basics, covering items such as boiling eggs and potatoes. She said that no one knew how to boil an egg anymore, as cooking had dropped out of most school’s curriculums. Other TV cooks such as Gary Rhodes said at the time that she was insulting the intelligence of viewers in dedicating one episode to how to boil an egg. Yet, with Delia having shown people how to cook an egg, egg sales rose that year 10% across the United Kingdom. She also mentioned a particular small aluminum frying pan (called the “Lune Metal”) as being fabulous for omelettes. It was made by a family firm in Lancashire that put out about 200 of them a year. Four months after the TV series, they’d received orders for 100,000 of them.

At the end of 2004, Delia and Michael sold their “New Crane” company to Seven Publishing at for £13.7 million, but retained ownership of her website.

In the same year, she announced that she was stopping shows teaching cooking on TV, as the demand had shifted to food entertainment shows. Here, Delia Smith tells Channel 5 News why she feels her cooking lessons are better suited to the internet.

Despite that, a few short years later, in November 2007, Delia Smith announced that she would be returning to TV to do a cooking series for the BBC.

In June 2009, Delia was awarded a CBE (Commander of the British Empire). She received it later that year in November in a ceremony at Buckingham Palace

Also in 2009, the BBC broadcast a five-part series called “Delia Through The Decades”, which was, as they said, “A celebration of Delia Smith’s career and the ways she has shaped what people eat and how they cook it.” [3]Delia through the decades. Accessed August 2019 at https://www.bbc.co.uk/programmes/b00q08p9

For Christmas 2009, Delia did a Christmas show for television, Delia’s Classic Christmas, broadcast on BBC.

Allen, Vanessa. Delia Smith confesses she flashed customers while she worked as waitress in the 1960s. London: Daily Mail. 5 January 2010.

Conlan, Tara. Delia and the great rice pud flop,by her mum; How Britain’s favourite cook got her recipes wrong as a girl. London: Daily Mail 24 April 2001.