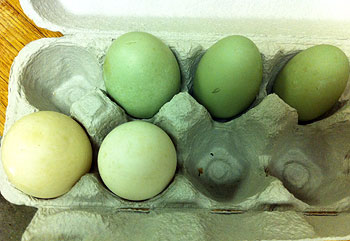 Duck eggs are used a great deal in Asia. They are used far less commonly in Europe, and even less so in North America.

The yolks are an orangey-yellow, and have a higher fat content than chicken eggs. The whites are higher in protein, and are very more transparent, with less of a yellowy-tinge to them, and so are very white when cooked.

Duck Eggs taste a bit richer than chicken eggs. Some people don’t like the extra-richness, calling it “birdy” or “gamey.” Others find that the flavour tastes like what “chicken eggs used to”, before mass production.

Ducks lay their eggs later in the day than chickens do, often not until 9:30 or 10:00 am in the morning. They will lay their eggs all over the place, and if there is water nearby, they will often drop them in the water at the water’s edge. They are laid in sizes ranging from teeny to extra-large, just as chicken eggs are, though often it’s just the large ones are sold commercially. Extra large size for Duck Eggs in America is 2 ½ oz (70g); large 2 oz (55g.)

All the rules about freshness, testing for freshness, etc, for chicken eggs apply to duck eggs.

The higher protein in Duck Eggs means they mustn’t be overcooked, or the whites will go tough and rubbery. Some people say they will be too tough if you completely fry them: they advise to rather partially fry them then add a few tablespoons of water to the pan, cover and let the steam moderate the heat and finish cooking them. Most people, though, seem to say they don’t notice a difference between fried chicken and Duck Eggs.

Swapping Duck Eggs interchangeably in recipes for chicken eggs: some people say you can’t; others who substitute all the time say nonsense, it’s fine. When the Duck Egg whites are beaten they will come up a bit higher owing to the protein. They take a minute or so longer to start frothing up, but then make up for lost time.

There is a great deal of debate with regards to duck eggs and salmonella as to whether:

Almost everything quoted on all-sides appears to be hearsay and speculation, ranging from “must be a higher risk because the eggs are often laid in mud or wet places” to “my mother told me never to eat them.”

You may read, for instance, that when in the 1970s some cases of salmonella occurred in the United Kingdom, that the finger was pointed at Duck Eggs as being responsible for almost ¼ of the cases. You may even feel inclined to believe it — until you read some sources saying the scare was in the 1960s, some saying it was just after World War II, some saying that in fact it was in the 1920s in America. At this point, with no one agreeing on when and where the scare even was, one starts to question whether it occurred at all, or whether it is in the category of the “microwaved poodle” myth.

In any event, as the hearsay has surged and ebbed over the decades, the market for duck eggs has been muted as people avoid them. This precludes large supply operations, leaving only very small mum and pop producers (the eggs thus by definition are free range.)

It’s not only around office water coolers and in Internet chat groups that assumptions are stated as fact. An FAO publication says that duck eggs are large salmonella carriers, with no references or facts to back up the assertion : “Although salmonellosis is not a major disease in ducks, duck eggs are a significant source of salmonellosis in humans. This may explain the taboo against touching duck eggs prevalent in many cultures, particularly in Africa. Duck eggs should not be stored in contact with vegetables that will be eaten raw, such as carrots, lettuce and cabbage”. [1]

A search of government literature from Canada, the United Kingdom and the United States reveals very little specific about Duck Eggs aside from the same general proper cooking admonitions applied to all eggs. It could well be that the market size for Duck Eggs to date has not justified undertaking the studies. For instance, the FAQ accompanying a study on “Salmonella in eggs” released in March 2004 by the British Food Standards Agency, specifically says “Duck and quail eggs form a small proportion of the market and were therefore excluded from the survey.”

Some Australian government reports do confirm that salmonella from Duck Eggs is possible:

In April 2001, the same journal reported that 6 people in a household were affected by Salmonella, with duck eggs “suspected.” (For context, in the following month of May, 36 people got salmonella from iceberg lettuce, and in June, 29 people got it from fried ice cream. [3]

Until hard studies are done, all you can say with certainty is that there’s a debate with varying opinions and assumptions. And given that salmonella can occur in everything from mushroom soup to fried ice cream, as well as poultry eggs, there’s every reason to apply safe food storage, handling and cooking precautions to all foods, including duck eggs.

An egg has to reach 158 F /70 C for both its white and yolk to start setting (the white starts setting somewhere between 140 and 150 F / 60 to 65 C.) Given that Salmonella bacteria are killed instantly at a temperature of 160 F / 71 C, a temperature difference of just 2 F / 1 C, getting an egg to that temperature should occur almost inevitably as a normal part of cooking eggs. (The debate about runny and sunny-side up eggs continues for all poultry eggs.)

Store up to 2 weeks in a cool place, or 6 weeks if fully refrigerated. Freeze for up to 6 months.

To freeze, crack them, beat them lightly, pour into a container, then label the container before you freeze it as to how many eggs are in there.

This web site generates income from affiliated links and ads at no cost to you to fund continued research · Information on this site is Copyright © 2023· Feel free to cite correctly, but copying whole pages for your website is content theft and will be DCMA'd.
Tagged With: Duck