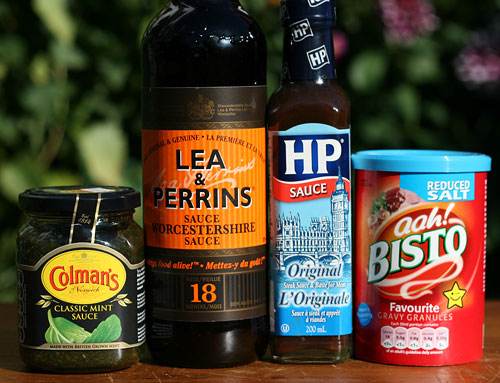 The English love their sauces just as much as the French love theirs, both savoury sauces and dessert sauces.

Gravy is the most common sauce made at home, with variants such as onion gravy being popular.

Other than gravy, perhaps the most common sauce made at home is a white sauce (which the French call “béchamel”.) It can be seasoned with salt and pepper, or salt and nutmeg, and served on its own. Or grated cheese can be added to it to make a cheese sauce, fresh chopped parsley to make parsley sauce, or mustard to make a mustard sauce.

Mint sauce is still sometimes made at home, as it is easily made with vinegar, sugar and fresh chopped mint from the back garden. Other sauces still made at home include Bread Sauce and Cumberland Sauce.

Sweet sauces such as a custard sauce are still made at home, usually from Bird’s Custard Powder, though ready-made tubs of custard sauce are also inexpensively available in chillers at supermarkets. Other popular sweet sauces include apple sauce (usually purchased) and cranberry sauce (a recent arrival to the English table and usually purchased.) The English will often mix sweet sauces (such as mint sauce, apple sauce, cranberry sauce) with meat, which appalls the French.

That being said, the most popular sauces in England since the Victorian Era have been commercial bottled ones. While England didn’t invent the concept of purchased commercial sauces (the Romans did that, with their fish sauce garum), they certainly revived the concept for the modern age, and when one thinks now of English sauces, one mostly thinks of bottled commercial sauces.

HP Sauce is referred to as “brown sauce”, ketchup as “red sauce.” Note that the English will still often say “tomato ketchup”, as opposed to just “ketchup”, because they still have other kinds of ketchup such as mushroom.

Often, two or more contrasting sauces are served with a meal. At Christmas dinner, you may be offered gravy, bread sauce, and cranberry sauce with turkey; for a Sunday roast dinner, if it’s beef, gravy, mustard, and horseradish sauce; it’s a game bird, gravy, bread sauce and red currant sauce.

Some traditionalists still begrudge the arrival of cranberry sauce to English tables, but it has lodged itself firmly on English tables for occasions such as Christmas.

Mint sauce may ultimately date back to Roman times; bread sauce dates from the Middle Ages.

There were two other sauces in England though that were popular before it came along, which have now died out. There was a white sauce made from eggs and cream, and thickened with ground almonds, as white wheat flour was a scarce luxury. And, there was green sauce, to be served with boiled meats. There were variations in the recipes for green sauce, but it was commonly made from finely-minced herbs such as mint, garlic, parsley and thyme, mixed with vinegar and thickened with bread crumbs.

In the 1800s, some writers moaned that every sauce in England was a “melted butter” sauce:

It seems though, that what they actually mean is a white sauce. Melted butter for sure, but then with flour added to make a roux, and then milk.

GOOD MELTED BUTTER…. Cut two ounces of butter into little bits, that it may melt more easily and mix more readily; put it into the stewpan with a large teaspoonful (i.e. about three drachms) of Flour (some prefer Arrow Root or Potatoe Starch) and two tablespoonsful of Milk. When thoroughly mixed, add six tablespoonsful of water; hold it over the fire, and shake it round every minute, (all the while the same way) till it just begins to simmer , then let it stand quietly and boil up. It should be of the thickness of good cream.” — Dr William Kitchiner. The Cook’s Oracle. 1822.

“In England there are sixty different religious sects, and only one sauce.” — Attributed to Neapolitan admiral Francesco Caracciolo, c1790.

“The difference between good and bad cookery can scarcely be more strikingly shown than in the manner in which sauces are prepared and served. If well made….they prove that both skill and taste have been exerted in its arrangements. When coarsely or carelessly prepared….they greatly discredit the cook.” — Eliza Acton, Victorian cookbook author. Modern Cookery for Private Families. 1845.

This web site generates income from affiliated links and ads at no cost to you to fund continued research · Information on this site is Copyright © 2023· Feel free to cite correctly, but copying whole pages for your website is content theft and will be DCMA'd.
Tagged With: British Food