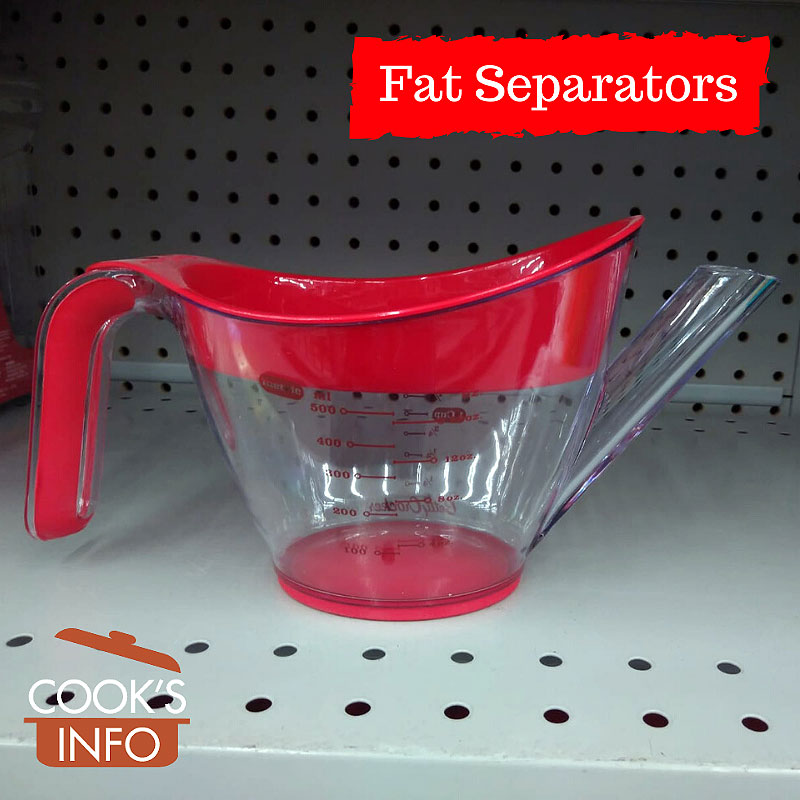 A fat separator is a device, typically in jug form, which uses gravity and time to separate fat from meat juices.

Typically, a fat separator looks a bit like a measuring cup, having a handle on one side. But, it also has a long spout on the other side.

The spout isn’t at the top of the jug, though, as you might expect at first: instead, it comes out of an opening in the bottom of the jug.

To use the fat separator, you pour drippings from your roasting pan into the jug, and let rest for a few minutes. The fat rises to the top, because it is lighter than the juices, while the juices stay at the bottom, where the opening for the spout is, and now it all starts to make sense. As you tip the jug to pour it, the juices from the bottom come out first, because they are right there where the exit hole for the spout is.

Fat separators are clear so that you can see the juices. The separators are usually made of heat-resistant plastic with side markings that allow you to gauge how much juice you have. There are, though, a few brands made of glass, spout and all. Some have a strainer over the opening as well to strain out bits.

Almost all are dishwasher safe.

You can use some of the fat to make a roux for the gravy or sauce.

One suggestion sometimes seen for separating fat from meat juices is to do the following: in a large measuring jug or in a bowl, prop up a sturdy, sealable bag such as you would use for the freezer. Pour the pan drippings in there, and wait a few minutes for fat separation to occur. Then lift the bag by the top, and snip a very small hole in one bottom corner of the bag, over where you want the juice to flow into. Take the bag away when the fat is close to coming out (have the original bowl handy to put the bag back into so that you don’t leave a trail of liquid fat.) The problem with this suggestion, however, would be that you must be very careful, as pan drippings can be exceedingly hot, and it just doesn’t seem very safe putting it in a plastic bag that could burst, melt, or spout out through holes, etc. Plus, it involves single-use plastic.

An alternative method, if the roasting has been done well in advance of the meal, is to put the drippings in the fridge for a few hours. The fat will congeal on top. Spoon it off, and discard into the compost bin.

You can also use a spoon to skim fat off, but this is not as thorough, and takes more patience.

This web site generates income from affiliated links and ads at no cost to you to fund continued research · Information on this site is Copyright © 2022· Feel free to cite correctly, but copying whole pages for your website is content theft and will be DCMA'd.
Tagged With: Cooking Tools, Fat