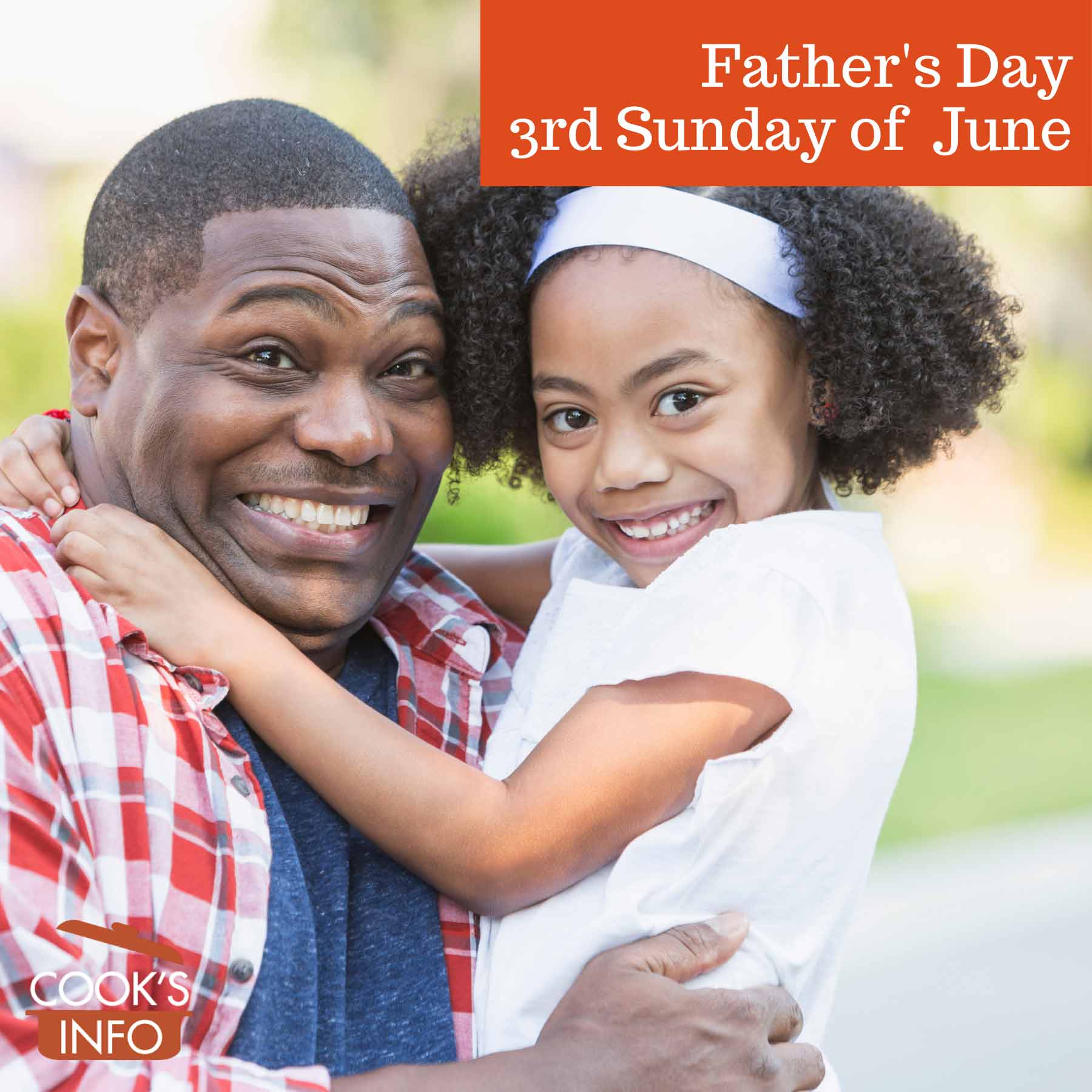 Father’s Day is observed on the third Sunday of June.

It is a day to honour fathers on.

Many people complain that the day has become very commercialized, but then they are unaware that it was the stores that kept the holiday alive when it was in danger of fading out in the mid 1900s (see History below).

Here are some non-commercial ideas for the day: https://dodoburd.com/thoughtful-fathers-day-gift-ideas (Link valid as of May 2021)

The Mother of Father’s Day was a Mrs John Bruce Dodd (né Sonora Louise Smart) (18 February 1882 – 22 March 1978). She was a Spokane, Washington artist and writer, who lived 610 Sharp Avenue. Her husband ran a funeral parlour. She had leisure time to practise her art, study and write. She studied the Blackstone language of the Blackstone First Nation, and wrote poems, such as one which was famous at the time called “Bide here with us”. She often published under the name of “Sonora Dodd.” 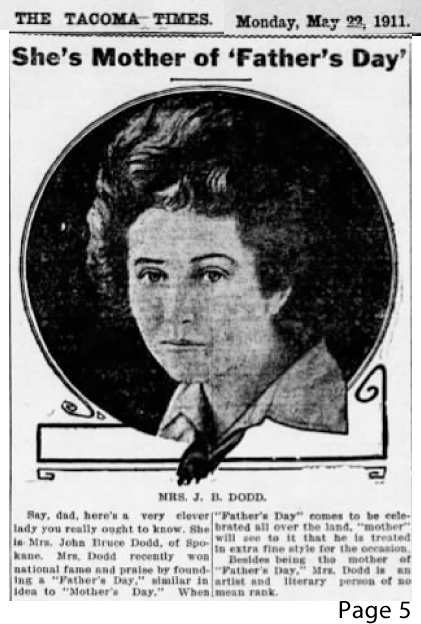 Her father was William Jackson Smart (1842–1919) ). [1]Mrs Dodd’s dream of father’s day to be celebrated 84th time. Grand Junction, Colorado: The Daily Sentinel. Sunday, 11th June 1978. Page 54. He had raised his children on his own when his wife died, and Sonora figured that since women had a Mother’s Day, then fathers should have their day, too.

She started her campaign by getting various ministers and churches on board with the idea and they put together a petition in 1910:

“Mrs. J.B. Dodd of Spoke heads the petition approved by the Ministerial Alliance of this city to set aside the first Sabbath in June to be known as Father’s Day.” — Spokane, Washington: The Spokane Press. Monday, 6 June 1910. Page 1, col. 3.

Her preference was for the first Father’s Day to be the first Sunday of June, which was her father’s birthday that year, but the sermons at the various churches for the day could not be prepared in time to meet the date. [2]Mrs Dodd’s dream of father’s day to be celebrated 84th time. Grand Junction, Colorado: The Daily Sentinel. Sunday, 11th June 1978. Page 54. So the day was moved to the third Sunday, and notices quickly sent out to get as many churches and organizations in the Spokane area on board as possible.

ORIGINATES A FATHERS’ DAY
Spokane Man’s Idea. Supported, by ministerial alliance
SPOKANE, Wash., June 12, 1910—Officers of the Spokane ministerial alliance and the young men’s Christian association of Spokane . are sending invitations to churches and allied organizations in towns and cities all over the United States to pay tribute to the head of the house on fathers’ day, Sunday, June 19th, the rose being suggested as a suitable flower to wear on the occasion.
Mrs. J. B. Dodd of 610 Sharp avenue, Spokane, who Is the originator of the idea, thus explained the plan for a. national movement in a petition to the ministers of this city:
“The beautiful custom of mothers’ day suggests the question: Why not a fathers’ day? This is further emphasized by the celebration of children’s day by our Sunday schools.
“Fathers’ day would call attention to such constructive teachings from the pulpit as would naturally point out:
The father’s place in the home.
The training of children.
The safeguarding of the marriage tie.
The protection of womanhood and childhood.
The meaning of this, whether in the light of religion or of patriotism, is so apparent as to need no argument in behalf of such a day, to be celebrated all over the country.”
Rev. Dr. William J. Hindley, pastor of the Pilgrim Congregational church, said in discussing the movement: “I’m glad there will be an opportunity to speak a few kind words in public ‘for the old man,’ who is entitled to a lot of praise; in fact, I do not believe any of us can say in words more than ‘dad’ deserves. I am proud, too, that the movement originated in Spokane, and I hope it will be generally observed In a national way.” — The Nebraska State Journal. Lincoln, Nebraska. 13 June 1910. Page 1, col. 2.

It was suggested that roses be a symbol for Father’s Day: red for living fathers, white for deceased ones:

“As carnations are worn on the latter occasion [Mother’s Day], roses are carried in the celebration advocated by Mrs Dodd, colored ones for the father who is still living, white ones for him who has passed away.” — Women Preparing for Father’s Day. Spokane, Washington: Spokane Chronicle. 7 July 1911. Page 17, col. 3.

“Red and white roses will appear as corsages and coat lapels today in Spokane and other important parts of the United States and in the widely spread foreign lands of Germany, Sweden, Korea, Japan, Mexico, Hawaii, Canada, and India. From present indications the red and white will shortly bloom on the third Sunday of June in about every other land that happens to have a father in it. For that is the significance of the roses on this date, the father’s day inaugurated in Spokane three years ago by Mrs John Bruce Dodd. The white rose caries the sad significance of the occasion. It is a commemorative token to the father who is gone. In this city the custom has been founded of passing baskets of roses among the congregation where the day is marked by mention in the services. By this means each one in attendance participates in the remembrance ceremony by accepting and wearing the red or white blossom.” — Spokane, Washington: The Spokesman-Review. Sunday, 15 Jun 1913. Page 5, col. 1.

In the first few decades, she resisted efforts to commercialize the day.

In the 1930s and 1940s the holiday faded, but the various companies selling men’s wear and men’s accoutrements kept diligently promoting it, until it finally became ingrained in the nation’s mindset. 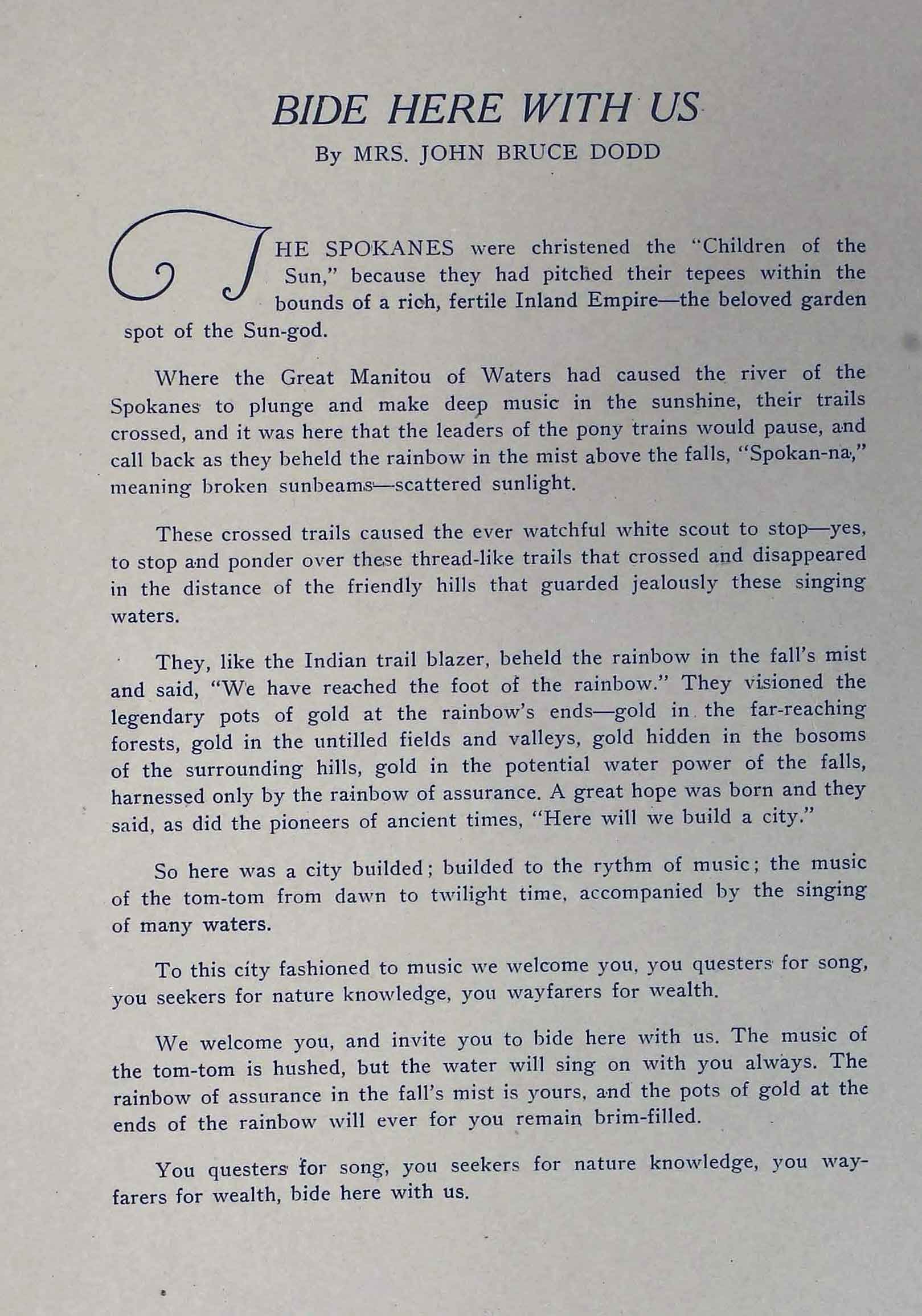