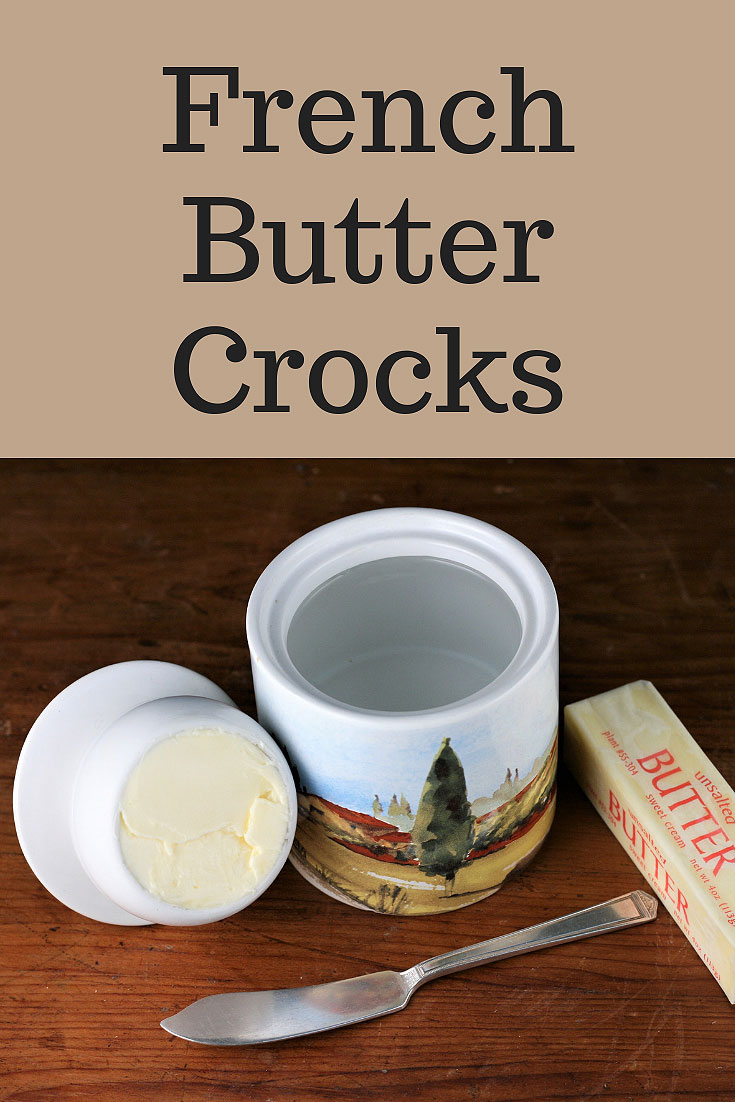 A French butter crock (aka “Cloche de beurre”, “Beurrier à eau” or “bell of butter”) is a container designed to extend the storage life of small amounts of butter at room temperature.

You can also use a butter crock for margarine.

French butter crocks have two parts: a base with a hollow cylinder attached to it, and a cup. You let your butter soften first, so that you will be able to pack it in tightly, leaving no air pockets. You pack the butter into the cylinder, then fill the cup, usually about ⅓ full, with cold tap water. You then turn the base with the cylinder part of it upside down and place it butter-side down right into the cup of water. The water creates an airtight seal, helping to keep out oxygen, which is what makes butter go rancid.

A butter crock will keep butter fresher longer than a regular butter dish, without the need for refrigeration. Fans say that it also makes soft, spreadable butter available at all times for use, and that you’ll use less butter, because the butter is soft and will spread further. (Some detractors counter that it all sounds high maintenance.)

A butter crock insulates butter. It doesn’t keep the butter cooler; the water will moderate heat, not prevent it. Don’t leave the butter crock in direct sunlight, or your butter will melt. Pick the right spot; right next to the toaster oven isn’t it.

Butter will stay good in a butter crock for up to a month if the kitchen temperature is under 27 C (80 F); above that, you’ll get less time, and the butter may fall out.

The tap water used, understandably, needs to be potable water.

Commercial butter crocks are often made of stoneware; these are more likely to be dishwasher safe than pottery ones. The cylinder part (where you pack the butter in) shouldn’t be glazed; it needs to be somewhat rough so that it can get a grip on the butter.

Manufactured butter crocks tend to have a “bell cup” that is the same diameter at the top and bottom. Some feel that cone-shaped bells will hold the butter in better.

The crocks are made by a great many different companies. Many consider the best ones to be those made in France. An American brand, Butter Bell®, labels itself as the “original”, but that would of course be startling news to people in France.

Change the water every week, or every 2 or 3 days. Use cool water and, if you are using unsalted butter, add a pinch of salt to the water to slow down the growth of mould.

If you add colder, harder butter to soft butter already in the bell, that new top part of the butter may detach. The cylinder part should be completely dry before you attempt to put butter in.

Sometimes the butter falls out into the water. It can be because the kitchen just got too warm.

Wash the butter crock thoroughly before re-using for the next round of butter.

It’s important, clearly, that the water used be clean, potable water — as in, safe to consume.

North America started to become aware of them in the late 1970s, when they became a very popular item for potters to make and sell. They had gone out of fashion by the 1990s, without their use really having become widespread in North America. North Americans were just too used to keeping everything in their colossal fridges.

Butter Bell® is a registered trademark name which the company vigorously protects. You’ll want to use a generic name such as “French butter crock” if you are writing about the containers generically. 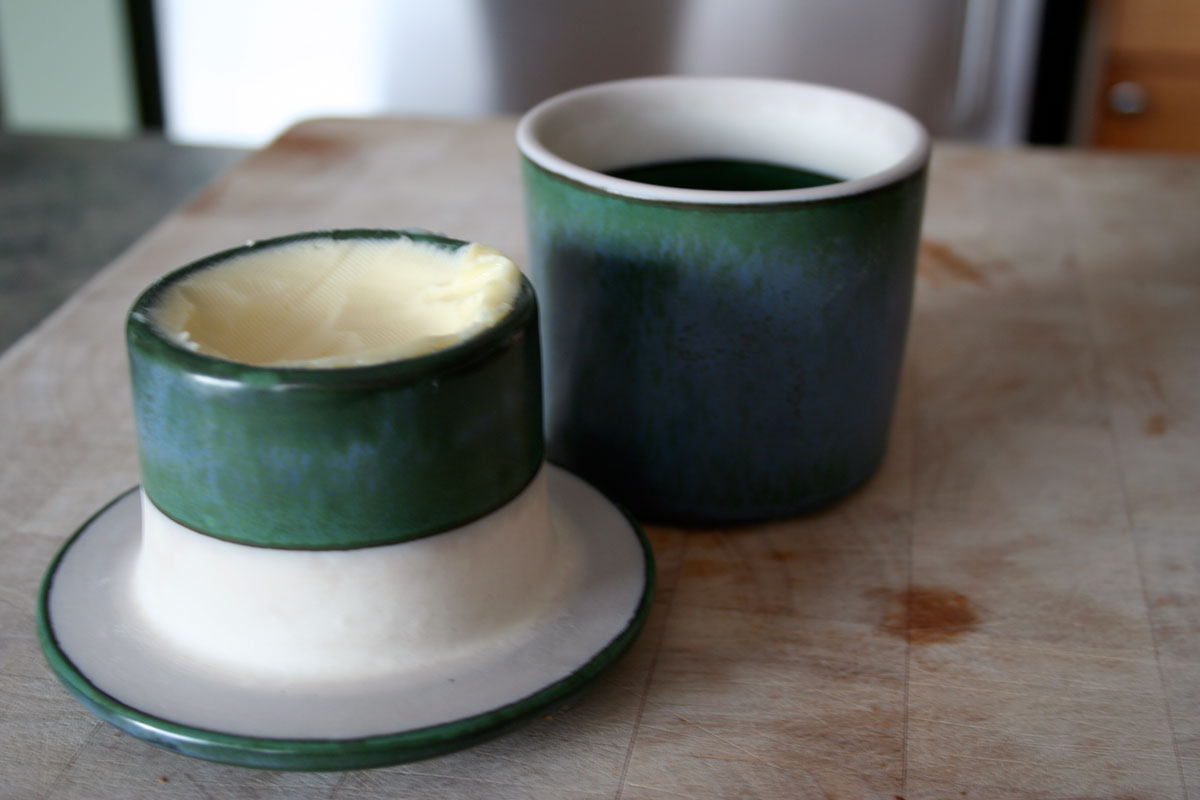 This web site generates income from affiliated links and ads at no cost to you to fund continued research · Information on this site is Copyright © 2023· Feel free to cite correctly, but copying whole pages for your website is content theft and will be DCMA'd.
Tagged With: Butter