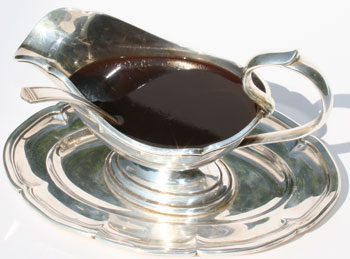 Gravy is a thickened savoury sauce made from the juices (“drippings”) of cooked meat. It may be dark or light in colour, and is served hot as a pouring sauce.

Gravy, in theory, gets its colour and flavour from the meat drippings. In practice, many people like to use a gravy browning liquid or powder to add colour, though some purists insist that it’s not needed.

Gravy has been traditionally thickened with flour. Though some now see this as old-fashioned, preferring instead to reduce the meat juices in a pan, in the north of England, approximately from Yorkshire up, and in Scotland, there is still a preference for rib-sticking gravies as thick and dark as possible thickened with flour.

Some people try thickening their gravy with a starch other than flour, such as cornstarch or arrowroot, but this can make the gravy seem gloopy and it won’t have the consistency that most people expect.

Instant flour is good for correcting Gravies at the last minute, as it dissolves easily. It usually comes in small, handy shaker containers. Beurre Manié is also good for this last minute correction.

In Canada and the UK, Bisto (powder or crystals) has long been the gravy thickener and browner of preference.

In America and in Canada, Kitchen Bouquet was a popular liquid gravy browner.

Tip for gravy thickening: thicken it with a roux made from the meat juices.

The challenge in making gravy is (a) making sure it is lump-free; and (b) being able to make it fast, as it is the last part of a meal you make, and everything else is waiting on it. Both challenges can be addressed by thickening your gravy with a simple flour roux.

Summary: Make a roux using a bit of the meat juice and some flour, and thicken your gravy with that.

Don’t use too much flour in your Gravy or it starts to mask the flavours. The amount of flavour you have to work with in Gravy is limited to the amount of drippings in the roasting pan. If the Gravy is too thick, add a bit more liquid. If it is too thin, this is harder to deal with. You can’t dump flour or starch straight in, as it will lump. So, most cooks mix some flour or starch with water first, and then add this to the Gravy. But then the Gravy has to be cooked again, as the flour will taste raw, and this gets problematic if everything else is ready, and just waiting on you and the Gravy.

This is where your “just in case” amount comes in: it can be added and it will quickly thicken the Gravy. The flour in it will not lump, because the flour in it has been precooked, and beyond time for thickening, you won’t have to allow added time to cook the flour.

You can also rescue a thin gravy with Beurre Manié.

The drippings contain fat and water, but they also carry important minerals and vitamins such as A and B vitamins, some of which are the vitamins we can only get from meat (such as B 12.) Making a Gravy from drippings allows the cook to make sure that this nutrition makes it to the plates. If you make Gravy or a sauce from the drippings, and skim the fat off, you may get the best of both worlds by getting rid of the fat, but retaining the hard to get B vitamins.

In skimming the fat off, you will lose the Vitamin A in the meat drippings, as it is a fat soluble vitamin and so it will stay with and in the fat being skimmed off. However, you can get Vitamin A from many other sources.

Freeze leftover Gravy in ice-cube trays. When frozen, pop out and into freezer bags. Whenever you need Gravy for a hot sandwich, to jazz up a leftover meal, etc, just pop a few cubes in the microwave for a few minutes.

“It may not be possible to get rare roast beef, but if you’re willing to settle for well done, ask them to hold the sweetened library paste that passes for Gravy.” — Marian Burros (New York Times restaurant critic)

“TO MAKE GRAVY WITHOUT MEAT: Slice three onions, and fry them brown in a little butter; add them to half a pint of water, and the same of beer, put in some peppercorns, salt, a little lemon-peel, three cloves, a little mace or Jamaica pepper, a spoonful of walnut pickle, and one of mushroom catsup, or soy and essence of anchovy a dessert-spoonful each, a small bunch of sweet herbs, and a quarter of a slice of bread toasted brown on both sides; simmer all together in a closely-covered sauce-pan for twenty minutes, then strain it for use, and when cold, take off the fat. It will taste exactly like a gravy made with meat.” — Mrs Dalgairns (aka Catherine Emily Callbeck Dalgairns). The Practice of Cookery Adapted to the Business of Every-day Life. (8th edition). Edinburgh: Robert Cadell. 1840.

The Romans made a stew with meat juices and grains that they called “granatus”. In French, this became “grané”. A scribe in England made a mistake transcribing some material, not being able to properly distinguish whether someone before him had written an “n” or a “v”, and so transcribed “grané” as “gravé”, later “gravey” with the “y” added as a pronunciation guide, and later, “Gravy”. And thus the English word and passion was born. Granés went on to die on the French culinary map, while Gravies went on to dominate the English one.