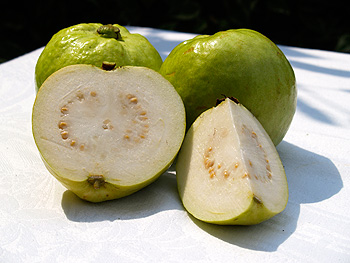 The Guava tree is an evergreen tree (in the tropics, at least.) The tree starts to bear fruit within two years of planting. After 5 years, a tree can bear five to six hundred fruits a year. The tree will live up to 40 years, but it is not very productive after 15. It is propagated by cuttings, because like apples and olives, the tree won’t reliably reproduce true to seed.

The tree only grows up to 20 feet tall (6 metres.) The leaves will be 3 to 7 inches long (7 to 18 cm.) The tree blooms with white flowers that are 1 inch wide (2.5 cm.) The tree can self-pollinate, but has better fruit yields when insects do it.

The Guava Fruit can be round, or pear-shaped. The skin is green, usually ripening to yellow. Some varieties have thin skin and many seeds inside; others will have thick skin and few seeds. Inside, the fruit can be white, yellow, pink or red. Some Guava Fruit are sweet, some are tart. They can weigh as much as one pound (450g.)

For best flavour, a Guava Fruit needs to ripen on the tree. However, if left on the tree until fully ripe, birds and bats have a field day with them, and once fully ripe, the fruit degrades quickly and bruises easily, making it a poor shipper.

Consequently, the fruits are picked and shipped underripe, wrapped individually and with padding around them. They will sweeten somewhat after picking, though sometimes they may go mealy. A ripe fruit will smell musky, and though the pear-shaped ones may look somewhat like pears, they will be more fragrant.

There are many different varieties; some are better for juicing than for eating raw.

Guava Fruit are grown all over the world in warm areas, including the Middle East, India and Florida. Commercially, most are used in jams, jellies and in guava paste.

Guava halves with the pulp removed. Usually the strained pulp is added back in during the recipe.

You can eat them fresh or cook with them. If eaten raw, owing to the seeds Guava Fruit are better seeded and then chopped or sliced as a dessert or in a fruit salad.

“To compensate a little for not being able to raise our own mangoes at the Creek, we have guava bushes along almost every fence row. Guavas have the rankness of odor of the tropics, deathly sweet and pungent, and the uncouth say that a self-respecting cat will bury a guava. The flavor, however, like that of many malodorous cheeses, is delicate. The bushes grow sometimes as high as a one-storied house and the fruit is borne in round golden balls the size of small peaches. There are two layers of solid meat, interspersed with countless small, hard, yellow seeds like bleached buckshot. True guava addicts eat seeds and all, and the sound of two or three of them at it is like the clashing of worn gears. The Florida stores carry Florida-canned guavas, but these have the seeds left in. The Cubans can the seeded layers of large choice guavas in a heavy syrup, so whenever I am in Tampa I go down into the crowded Cuban quarter, redolent of scorching coffee beans and the long sweet sticks of Cuban bread, and buy canned guavas there. I serve them with cream, or with crackers and cream cheese.” — Rawlings, Marjorie Kinnan. Cross Creek. New York: Charles Scribner’s Sons. 1942.

“Guava is one of the tropical fruits which is coming into general use now, as supplies of the pureed and dehydrated fruit not needed by the military are being released to the bakers and makers of candy and jelly. The shipments are coming from Cuba, the annual crop there amounting to around thirty million pounds, all harvested from the wild bushes. Two Cuban guava plants were built during the war to supply the dehydrated jelly for use in military rations, guava being one of our richest sources of vitamin C. Production last year totaled one thousand tons of this base.” — Paddleford, Clementine (1898 – 1967). Food Flashes Column. Gourmet Magazine. October 1945.

Called “Guayaba” in the Dominican Republic.

This web site generates income from affiliated links and ads at no cost to you to fund continued research · Information on this site is Copyright © 2023· Feel free to cite correctly, but copying whole pages for your website is content theft and will be DCMA'd.
Tagged With: Caribbean Food, Latin American Food, Mexican Food