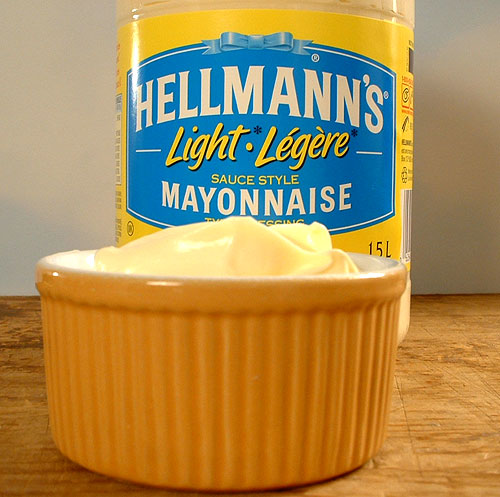 Hellmann’s Mayonnaise is a commercial brand of bottled, shelf-stable mayonnaise. It is sold in many countries of the world.

There are many variations now on offer.

In America, Hellmann’s is called and sold as the “Best Foods” mayonnaise brand west of the Rockies, but the manufacturers say it is the same mayonnaise, the same recipe. Some consumers, however, think they detect a slight difference.

The mayonnaise can be formulated differently for different countries. Hellmann’s as made in America is different from the Hellmann’s made in Canada. People used to the American brand of Hellmann’s tend not to like the Canadian version.

Hellmann’s Mayonnaise first went on sale in bottles as a third-party product in 1912. For the earlier history, see the biography of Richard C. Hellmann.

Richard Hellmann had been selling the mayonnaise as one of many products to customers coming into his delicatessen in Manhattan. He would dollop it into small wooden tubs for them. He was a recipe he developed himself, based on his previous work in the food trade, and based on many longer hours of tinkering he did after shop hours. He decided to try selling the mayonnaise in clear-glass, labelled bottles as a product: both in his own store, as well as in in other delicatessens and grocery stores.

On 1 September 1912, he began selling his newly repackaged mayonnaise. The label he’d decided on had three blue ribbons on it. A Blue Ribbon, at the time and still now, usually means first place winner at fairs and competitions. He offered two sizes, 3 ½ ounce and 8 ½ ounce, in screw-top jars with wide mouths on them, rather than narrow necks or openings.

“He said that after he decided to bottle the product in glass jars for individual family consumption, his entire first output was purchased right in his factory.” [1]

He was not the only person in the bottled, direct to consumer salad dressing business. In Philadelphia, in 1907, a delicatessen had advertised for sale “Mrs. Schlorer’s Mayonnaise. And many other companies had long been in the bottled salad dressing business, such as E.R. Durkee of New York (since 1877), Curtice Brothers of Rochester, New York, etc. He also ran a delivery truck, delivering the product right to the stores that were willing to carry it to make sure they always had stock. Retailers had to pay upfront for any bottles they took, but each week they could return any unsold bottles.

In November 1913, he applied for a trademark on his ribbon graphic.

In May 1914, he simplified the label to be one blue ribbon, and trademarked it along with the name “Blue Ribbon Mayonnaise.”

His jars were reusable for home canning; they just needed a new rubber ring, which Hellmann was also happy to sell you for a penny each.

As sales grew, he hired distributors to take the product to various merchants in various parts of New York City.

By the end of 1914, the business was too big to operate out of the back of the delicatessen any longer. He sold the store off, and opened a small mayonnaise factory in 1915 at 120 Lawrence Street (now West 126th) in Manhattan. That was only temporary, though: by the end of 1915, he had a larger factory at 495 / 497 Steinway Street, in Long Island City.

“Richard Hellmann, Inc. Convention Tomorrow.” A convention, banquet and dance has been arranged by Richard Hellmann, Inc, of 497 Steinway Avenue, Long Island City, for tomorrow, for members of the organization, its out of town representatives and its business friends. The program for the day includes a trip through the factory, followed by a convention at 4 o’clock at the Hotel McAlpin for distributors of the firm’s products.” — Brooklyn, NY: Daily Star. Friday, 25 February 1921. Page 2.

In February 1916, the company was incorporated as Richard Hellman, Inc.

He briefly tried some other products, such as horseradish and pumpernickel bread, but they were discontinued in favour of increased focus on the mayonnaise and selling it outside New York City.

In November 1919, Hellmann licenced a John Behrmann to make the mayonnaise in Chicago.

In 1920, the New York Tribune asked three chefs to rate commercial salad dressing brands. They voted Hellman’s mayonnaise the best, and found that at 85% oil, it had more than any other salad dressing they tested. This helped to boost sales.

In the early 1920s, sales of the mayonnaise started in Toronto, Ontario, Canada.

In 1922, he began building a larger factory (five stories) at 34-08 Northern Boulevard in Long Island City. Also in 1922, Richard travelled to San Francisco where he set underway plans for a Hellmann’s plant in San Francisco to supply the west:

As the 1920s advanced, Hellmann continued his efforts to build markets out west:

In 1922, the first Hellmann’s mayonnaise cookbook was published by Behrman in Chicago. At the time, the product was known as “Hellmann’s Blue Ribbon Mayonnaise.”

By the mid 1920s, there was a lot of competition for the bottled mayonnaise consumer in America: over 600 companies had entered the fray. Hellmann responded by investing in techniques, acquiring the ability to emulsify mayonnaise better, and by the end of the 1920s he could produce three tons of mayonnaise an hour.

“Creation of the business of selling Blue Ribbon mayonnaise was described as an American business romance at the convention of the northwestern group of Long Island plant distributors of Richard Hellman. Inc.. its maker, in Hotel Statler, Saturday. Richard Hellman, president of the company, formerly was a grocer who developed a neighborhood business by selling his mayonnaise, about 12 years ago. Gradually the business grew until now hundreds of thousands of jars of his mayonnaise are sold in the United States and Canada. Plants at various points in the United States are working to capacity manufacturing the product, Mr. Hellmann told the convention. Among those who spoke on problems relative to the business were George C. Rohrs, general sales manager; Joseph Wood, national sales councilor; C. D. Meschter, manager of plants, and R. T. Moore, district sales manager. The convention will close Saturday evening with a dinner at 6:30 o’clock.” — Mayonnaise Men Meet: Story of Sale of Blue Ribbon Told at Convention Here. Buffalo Evening News. Saturday, 30 April 1927.

In the same year, August 1927, he sold the Hellman’s company to Marjorie Merriweather Post of Postum Foods (which became General Foods in 1929.) [2]

In 1929, the mayonnaise label was resigned to be oval inside a rectangle, instead of round.

In 1929, the Steinway Avenue site was sold to Loews theatre chain. [3]

Meanwhile, out west, there was a company named Best Foods. It was making their own mayonnaise, courtesy of the Gold Medal Mayonnaise Company of Yonkers, New York (operating since 1922) which it had bought. It was sold labelled as “Gold Medal Mayonnaise.” Best Foods was acquired by a Gold Dust Company, then that company in turn was acquired by Postum Foods in January 1932 (which by now had been renamed to General Foods), and the two mayonnaise brands, Gold Medal and Hellmann’s, were merged and were assigned to the Best Foods company The name Hellmann’s was kept for the eastern part of the country (and Canada), and Gold Medal operations in those regions were renamed to Hellmann’s. In the western half of America, Gold Medal was renamed to “Best Food Mayonnaise” and the Hellmann’s San Francisco plant was converted to labelling its mayonnaise “Best Food Mayonnaise.” [4]

The mayonnaise quickly became the most profitable product in the Best Foods wing of the company. [5] In 1942, Best Foods became independent of General Foods. In 1959, the Best Foods company merged with the Corn Products Refining Company (which made Mazola Corn Oil, Karo Syrup, etc.)

In 1961, Hellmann’s mayonnaise was first introduced into the United Kingdom. They had to bring the British around to the idea of mayonnaise in general. At the time, bottled “salad cream”, and in particular Heinz Salad Cream, still reigned supreme in Britain as a British food. Bottled mayonnaise was still a little bit suspicious, being a French food made by Americans. (The British did not perceive Heinz as an American company.)

In the 1970s, the mayonnaise was introduced into Portugal, Spain, Brazil, Argentina, and Colombia as Hellmann’s.

In the 1960s, the first major variant was introduced: Hellmann’s Spin Blend, with one-third less oil.

In 1987, Hellmann’s Light appeared on store shelves, followed by a cholesterol-free version.

In 2000, the Bestfoods company was purchased by Unilever Global.

Most newspapers and publications of the time referred to the mayonnaise, in both editorial copy and advertisements, as “Hellman” with just one “n.”

[2] “A contract with a controlling interest in Richard Hellman, Inc., (sic) manufacturers of sauces and relishes, has been obtained by Postum Company, whereby Postum will buy its entire business and assets. The plan virtually provides that common stockholders of the Hellman company shall be entitled to receive on liquidation, one share of Postum stock for nearly four shares of Hellman. The preferred stock of the Hellman company will be retired as soon as practicable.” — Wall Street Briefs. Oakland Tribune. 16 August 1927. Page 39.

[3] …”arrangements have been completed for the erection of a motion picture theatre to seat between four and five thousand persons, and to cost $2,5000,000, in Twenty-eighth Avenue, between Steinway and Thirty-eight Streets, in Astoria. Negotiations for the site, most of which was owned by Richard Hellman, the so-called “Mayonnaise King”…. It will be on the original site of Hellman’s mayonnaise business which is now part of a great merger of food industries recently announced as being formed by J.P. Morgan & Co.” — Loew’s Plans Costly House for Astoria. Brooklyn, New York: Standard Union. Wednesday, 14 August 1929. Page 16.

[5] “Gold Dust business has been built to include distribution of a variety of products… (the) company has been carrying on a vigorous campaign toward economics, and merger of Richard Hellmann Inc. with the Best Food lines is resulting in considerable savings and improved competitive conditions in the mayonnaise field.” — What’s Behind Your Stock. Chester Times, Chester, Pennsylvania. Monday, 29 August 1932. Page 2.