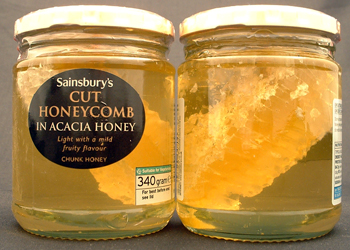 Contents hide
Bees make honey by collecting flower nectar and returning it to the hives to be food for the hive.

The colour and taste of the honey will vary depending on what flowers the bees took the nectar from. Generally, the lighter the colour, the milder the taste. The strongest honey flavours come from buckwheat, heather and pine flower. It takes about 12 honeybees their entire lifetime to produce a teaspoon of honey.

Baker’s honey is a blend of lower-grade honeys that aren’t considered high-enough quality for table use. Consequently, it is intended for use in cooking.

It is safe to eat as is straight out of the jar, but because it may have a cloudier appearance and a stronger taste, it might be less preferred at the table than lighter appearing and tasting honey. Its hearty robust flavor makes it good in a loaf of whole grain bread, or other baking, in a barbeque sauce, or in marinades, etc:

“Bakers honey is a combination of many varieties of honey that are mixed together in the extraction process. This honey has been heated. It has a strong aroma and taste. Great in baking and marinades.” [2]Mountain Valley Honey. Accessed September 2020 at https://mountainvalleyhoney.co.nz/product/bakers-honey/

It’s not strictly true that Baker’s Honey has always been overheated in the processing:

“The hydroxymethylfurfural content (HMF) of Baker’s honey is allowed to be higher than 40mg/kg, which isn’t the case in other types of honey. This can be the result of overheating the honey. Sometimes, however, honey can innately have a higher HMF content. According to EU-standards, this makes the honey of a lower quality. In this case, the honey can still be used as an ingredient for baking, in which case the honey would be overheated anyway.” [3]Weyn’s Honey. Accessed September 2020 at https://weynshoning.be/en/products/honey/bakers/

In the EU, “the words ‘intended for cooking only’ must appear on the label in close proximity to the product name.” [4]EU labelling rules for honey. Council Directive 2001/110/EC, 20 December 2001. Accessed September 2020 at https://eur-lex.europa.eu/legal-content/EN/TXT/?uri=LEGISSUM:l21124a

Comb honey is a raw honey-filled wax section of the hive (the wax is edible.)

The EU defines comb honey as “honey stored by bees in the cells combs or thin comb foundation sheets made solely of beeswax and sold in sealed whole combs or sections of such combs.” [5]EU labelling rules for honey.

Chunk honey is a section of the comb. The EU definition is: “honey which contains one or more pieces of comb honey.” [6]EU labelling rules for honey.

Processed (or “extracted”) honey has been extracted from the comb, and filtered to remove solids and impurities and to help reduce crystallization. When pasteurized, it will generally be liquid and good for drizzling.

Raw honey is thicker and good for spreading. It is unpasteurized.

Sometimes you will also see “creamed honey”, which is honey that has been stirred by machines to introduce air to make it opaque, creamy and thick for spreading. The side benefit to the producer is that the air introduced lowers the honey costs by volume.

In the EU, the labelling on honey must indicate the country or countries in which the honey was harvested. When the honey is a blend of honeys from more than one country, one of the following statements may be used rather than listing all the countries separately: [7]EU labelling rules for honey.

Honey is more water-attracting than sugar, so it helps prevent baked goods from losing moisture and drying out as fast.

Honey inhibits bacteria growth and has antioxidants. The darker the honey, the more antioxidants it has.

Honey shouldn’t be given to infants as all types of honey, even processed and pasteurized, can contain clostridium botulinum spores that very young children can’t tolerate. The spores can cause botulism in their stomachs (adults contain flora in their intestines which prevent this.)

“Infant botulism is a concern for children under one year of age. It is possible for bees to pick up the botulism spores from flowers or soil. These spores are not destroyed during the processing for honey. The botulism spores grow in the baby’s intestinal tract and then produce the toxin. This is less likely to occur after the age of one year when the baby’s digestive tract matures.” [8]Rohrs, Barbara. Botulism: What You Don’t See or Smell Can Still Hurt You. Ohio State University Extension, Family and Consumer Sciences. HYG-5567. 30 November 2011. Accessed November 2019 at https://ohioline.osu.edu/factsheet/HYG-5567-11

Many of the beneficial enzymes that honey contains can be destroyed by heating, so don’t think you’re actually making a cooked dish more nutritious by using honey rather than sugar.

The pH of honey

Though the average pH of honey is 3.9, the pH of honey can range widely from 3.4 to 6.1. Consequently in matters of food safety such as home canning, etc., it can not reliably be treated as a high-acid ingredient. [9]National Honey Board Food Technology / Product Research Program. Honey Hotline Fact Sheet. pH and Acids in Honey. April 2006. Accessed August 2015 at https://www.bjcp.org/mead/ph_acid.pdf

The shelf life of honey is practically years, if in a tightly sealed container. It stores well because it has such a low moisture content. If it goes cloudy or crystallized, it can be restored with gentle heating in a microwave or simmering pot of water. 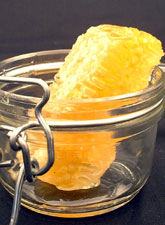 Man seems to have been collecting honey for at least 10,000 years. The first definite recorded knowledge of bee hives for domesticated production is from 2500 BC. Egyptians mastered the art of keeping beehives. They made two varieties of honey, light and dark, and preserved it in jars with wax-sealed tops. Jars of honey, sealed and stored away in ancient Egypt, have been found in several pyramids and tombs, such as those at the Temple of the Sun. The honey had darkened and thickened, but still held its scent. Reputedly, archaeologists have tasted some of these honey finds and found them still edible (which might be difficult to believe without redefining the word “edible”).

Greeks and Romans used honey extensively as a sweetener, for making some wines, and to preserve food in.

Toxic honey can be produced if the bees have gathered nectar from toxic plants in which the toxin is also present in the nectar, for instance, flowering rhododendrons.

Xenophon was a Greek military commander in 401 BC who had to lead 10,000 Greek soldiers on a retreat out of Persia after they’d been defeated by the Persians. The story of their retreat through Kurdistan, Georgia and Armenia is recorded in a book called the “Anabasis.” At one point, near Trebizond (the present-day Trabzon in northeastern Turkey), his men harvested honey from some beehives they found, but the soldiers became sick, weak and disoriented, vomiting and unable to move.

Some 334 years later, Pompey camped his armies near Trebizond. The enemy that he was campaigning against (the forces of Mithridates, king of Pontus) placed toxic honeycombs where Pompey’s troops would find them, which they did, and ate them. While they were ill, the enemy fell upon the sick Roman soldiers and massacred them.

The bees in both cases had likely fed off rhododendron, as Pliny the Roman historian in fact guessed, as well as azaleas and oleanders. Discordes (c.40-90 AD) also noted the toxic honey in this area and pinned its cause down to the same flowers. Pliny noted that the people of the area were also unable to sell their beeswax; he called their honey “meli maenomenon” (“mad honey”.)

The actual compound that is toxic is a type of “grayanotoxin.” Some species of rhododendron are more toxic than others. The compound is also present in the “Mountain Laurel” in America.

“Mad honey” was used in small quantities added to alcohol as a sort of recreational drug. Many Greek religious activities such as prophesying may have been done with mad honey added to mead to induce a small amount of madness to create a mind-state fit for prophesying.

“The differences between any old honey and prize-winning honey, although invisible to the amateur, turn out to be vast, and also difficult to master. Your honey must not be too watery. It should be bright, not dingy, and free of crystals, air bubbles and stray bee parts. It must fill the jar precisely, and the jar must sparkle…. Amazingly, flavour and aroma make up only 10 per cent of the score in honey competitions.” — Wente, Margaret. My honey’s got the bug. Toronto. Globe and Mail. 13 November 2009.

The Roman word for bee was “apis”; their word for honeycomb was “favus”.

This web site generates income from affiliated links and ads at no cost to you to fund continued research · Information on this site is Copyright © 2022· Feel free to cite correctly, but copying whole pages for your website is content theft and will be DCMA'd.
Tagged With: Ancient Egypt, Ancient Greece, Roman Food