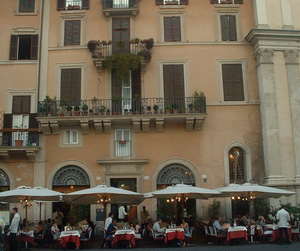 Perhaps more than any country, it’s hard to say of Italy that there is a national cuisine. While it is also hard to say this of France, Italy has had far more history and civilisations roll through it, with each leaving small pockets of themselves behind in their wake. Nor has Italy ever had the mania for centralization that has been the keynote in France, from the days of monarchy right to the Republic at present.

Italy’s current political regions remain closely tied to their historical boundaries, whereas in France these were broken up the by Revolutionary Government. This has helped Italy’s regions maintain their food distinctness. Molise, a newly-created region, dating from December 1964, is an exception. It was split off from Abruzzo. To the east is the Adriatic Sea, and to the west of the region of Lazio (Latium), where Rome is — so not very far from Rome. Though it is newly created as a separate area, the area was kept intact with its identity.

Bologna by many is considered the best Italian city to eat in. Even those who will say their own city has the best food, will usually all say Bologna is next best.

Recently, Italy has given birth to the Slow Food movement.

Many small food shops in small neighbourhoods are being replaced by large supermarkets.

Many Italians in North America have a ground floor kitchen for display. The real “cooking kitchen” is in the basement.

Many people feel that pizza in some parts of New York is better than pizza in Italy.

Lunch was traditionally the big meal of the day. This is shifting now to the evenings, as people find it harder to get away from work for so long in the middle of a day.

Called “piccola colazione” or “prima colazione”. This is usually taken a bar, and consists of a coffee and a pastry.

Courses in a classic Italian meal

At home, you are likely only to have out of the following the Primo and Secondo. The full-blown set of courses is reserved for a restaurant or special festive meals.

Nibblies before a meal. The idea is that antipasti should be things that you can quickly cobble together. They’re just meant to be appetizers, to keep the famished hordes out of the kitchen and buy yourself some time to finish cooking.

Primo Piatto means literally “first plate”, the starter. It is usually a soup, or a starch such as pasta, rice or polenta. The idea was to start filling people up, with something cheap. Soup is eaten nearly every day in Italy. Some regions are known for their soups — Tuscany for instance has ribollita.

“Secondo Piatto” means literally “second plate.” This is the main course. It will be meat or fish. Because the edge on the eater’s hungry has already been blunted by the soup or starch in the first course, you don’t need to serve all that much. It is served with a side vegetable called the “contorno”. The contorno can be a cooked vegetable or a salad.

The dessert, literally the “sweet.” Cheese, fruit or actually what North Americans would call a dessert, such as a baked good, ice cream, etc.

Coffee, in the form of espresso, is served after dessert, separately, never with dessert.

Entertaining over food is usually done at restaurants, rather than in the home.

Many Italian restaurants around the world serve adaptations of Italian food, such as pizza with pineapple on it, and mozzarella cheese made from cow’s milk. Their chefs are not even Italian.

Consequently, in 2004, the Italian ministry of Agriculture and Forestry launched a scheme to evalute 60,000 self-labelled Italian restaurants around the world. [1] A sticker to display would be awarded to those who met the following standards:

There are no liquor licensing laws in Italy.

Italian consumers don’t trust their tap water for drinking. In 2003, 177 litres of bottled water were sold per person in Italy, making Italians the largest bottled water consumers in the world. 98% of that water sold was mineral water. 65% is still water, 35 % carbonated. Flavoured water cannot be called water by law, and only has .1% of sales. [2]

By law, the largest bottle size for mineral water is 2 litres. Spring water is not subject to that constraint.

Italian food might seem simple, but they are actually very conservative in their food. They don’t like “fusion” cuisine — what is done in one region, you wouldn’t do in another, and you would never dream of making a curry pizza. They don’t mind experimentation, but only within very narrow boundaries.

Cheese is so rarely used as an ingredient in fish dishes that it’s safe to say “practically never.” There’s no dietary laws behind the prohibition: just a sense of the texture and flavour of cheese not generally going with seafood or fish. In Venice, you may occasionally find a light sprinkle of Parmesan on seafood cooked in butter, or of Romano on seafood dishes cooked in olive oil. [3]

Some foods, such as Prosciutto, Polenta and Pasta, and wine, can be traced to the Romans.

In Italy, using a fork to eat with started in the 1300s. Forks were actually invented in Byzantium and used there before this. The habit may have come in via Venice, which traded with Constantinople before attacking and occupying it in 1204.

The fork was in use throughout Italy by the early 1600s. “All the Italian cities that I have visited have a custom that is hardly in use in other nations of Christianity. The Italians always serve their food with a little fork. Everyone who touches the meat with his fingers transgresses the rule of civility. The forks are made of iron or pewter, the nobility have them sometimes in silver.” — Thomas Coryat, Crudities Hastily Gabled up in Five Months Travells (1611) (Glasgow: MacLehose, 1905), p. 236.

In the 1700s, Italians continued boiling meat and poultry before roasting it, long after the French and English had abandoned the practice.

Refrigerators started appearing in homes in Italy in the 1950s.

“The Italians civilised all of Europe, and without a doubt, it was they who taught us how to eat”. — Guillaume Hyacinthe Bougeant and Pierre Brumoy, in Preface to “Dons de Comus”, 1739.

Although Mrs. [Marcella] Hazan was born in Northern Italy, she thinks it’s a myth that northern cuisine is any better than that of the south. “I think it’s wrong to say northern is better than southern food. It’s different, that’s all. Everyone thinks it (southern food) is just tomatoes and garlic. Well, they do have the best tomatoes but you can eat for months in the south and never have a tomato. They have excellent pecorino cheese, too, from the sheep. Fortunately, olive oil is everywhere in Italy.” She adds that Italian food has a way of making for relaxed conversation. “You don’t have to figure out what’s on the plate in front of you. Eating Italian food is a direct experience. You don’t have to analyze it. You don’t have to figure it out. A chicken looks like a chicken and a zucchini is a zucchini.” — New Book From Cook. In The Frederick Post. Frederick, Maryland. 22 December 1986. Page E-1. [Originally in The Christian Science Monitor].

[3] The Greek writer and gourmand, Archestratus (c. 350 BC) also disliked the use of cheese in fish dishes, complaining that people in Syracuse, Sicily did it at the time.