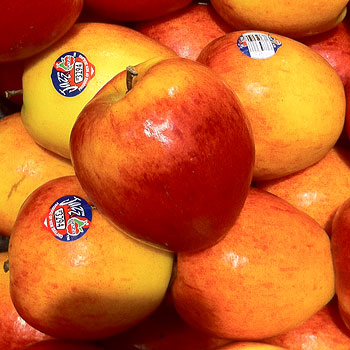 They are sometimes slightly taller than round.

The skin has a yellowish-orange background covered by flushes of red.

Inside, they have crisp, dense, juicy cream-coloured flesh, with a sweet taste with very little tartness.

The flesh is very hard when first picked, even though they are harvested late in the season. The apple benefits from a bit of time in storage which can also be a benefit if the apples are being “stored” during long shipping journeys anyway.

The name is trade-marked. The sale of the stock for the apple, and the marketing of it, is handled by a company called Enzafruit.

The generic name for the fruit is Scifresh.

As of 2010, Jazz Apples are being grown in Australia, Belgium, Canada, Chile, south-east England, France, Germany, Hong Kong, Ireland, New Zealand, Norway, Singapore, Spain, Sweden, the Netherlands, Thailand, and the USA. In the USA, they are being grown in Washington State.

For fresh-eating or cooking.

The flesh holds its shape well when baked in pies.

Jazz Apples were developed in New Zealand in the 1980s from a cross between Braeburn and Gala apples.

They were released commercially in April 2004.