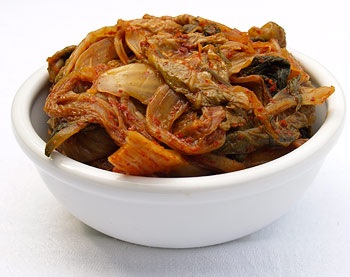 Kimchi is a traditional pickled Korean vegetable condiment that remains very popular. Sometimes, three different kinds of Kimchi will be served at the same meal. In South Korea, about 40 pounds (18 kg) of Kimchi is eaten per person per year (2006 figures.)

There are several different regional and seasonal variations in Korea.

Kimchi can be made throughout the year, based on when certain vegetables come into season. The flavours of spring and summer Kimchis are kept light. Cucumber Kimchi is made in the summer; in the spring, Kimchi is made from young cabbage and radishes. However, despite most vegetables being available year round now, November is still the traditional time for making Kimchi, particularly cabbage Kimchi. Kimchi made at this time of the year is called “kimjang Kimchi” (meaning “winter Kimchi.”) Some Korean companies still maintain the practice in the autumn of giving a “Kimchi” money bonus to employees, to allow their households to buy all the ingredients needed to make theirs.

The classic Kimchi is cabbage. The cabbage used is “Chinese” cabbage, either the Brassica chinensis variety, or Brassica pekinensis. The cabbage is trimmed first, then soaked overnight in a brine, rinsed very well and drained. The cabbage Kimchi is assembled somewhat like a cabbage roll: all the other ingredients are assembled, then rolled up into cabbage leaves, then put into the pickling vessel.

Regardless of ingredients, the basic process is the same. The vegetable is salted, which extracts liquid and thereby firms it up. Then it is spiced using ingredients such as red peppers, salted fish, ginger, garlic, green onions, soy sauce, soybean paste, rice wine, mustard, malted rice, etc. Rice powder may be add to thicken it, and give it a bit of a glaze. The mixture is then allowed to ferment in sealed clay containers for at least 4 weeks at 40 F (5 C), for up to 6 weeks. Air has to be kept out during this fermentation process, or it will all go sour. Traditionally, the pot was sealed, wrapped in straw and buried in the ground.

No sugar or vinegar is used for the pickling process. The pickling works through lactobacilli (including Lactobacillus plantarum and Lactobacillus brewis) which are present on the leaves of vegetables, but which usually remain on the surface. When a plant is chopped up and allowed to ferment, the lactobacilli colonise the plant’s cells. They convert sugars and starches into lactic and acetic acid. This creates an acidic environment by lowering the pH, and thus causes fermentation. The salt content needs to be about 3% for proper fermentation to happen. The lactic acid produced is part of the flavour of the finished product.

Japanese-style Kimchi is milder both in spice and pungency, to meet Japanese tastes. It is also cheaper, because Japanese manufactures use a different process that skips the fermentation, and draws on artificial flavourings.

Making Kimchi seems to have started somewhere between the end of the 600s to the mid 900s. It was probably an adaptation of Chinese pickling techniques.

Red peppers were introduced into Korea by the Portuguese in the 1600s, but the first written record of their being included in a Kimchi is in 1766.

The addition of fish sauce started sometime in the 1800s.

North Korea used to be well-known for its Kimchi.

Kimchi gained world recognition with the Seoul Olympics in 1988, and with increased Korean immigration to North America.

A trade battle began to emerge at the start of the 2000s between Japan and Korea over Kimchi. Japan used to import Kimchi from Korea but Japanese companies swung into the market in the 1990s. Japan crossed a line, though, in 1995 as far as South Korean producers were concerned. The Japanese proposed that for the upcoming 1996 Atlanta Olympics, the official Olympic food be designated as Kimchi — specifically, Japanese Kimchi. In retaliation, South Korea in December 1995 asked the World Health Organization and the Codex Alimentarius, maintained by the UN’s Food and Agriculture Organization, to establish standard definitions of Kimchi. Korea’s approach was that Japanese Kimchi was substandard and could affect consumers’ health.

While the world bodies deliberated, Japan did for Kimchi what it did for cars: by 2000, Japanese Kimchi had more than 80% of the world market.

A compromise definition of Kimchi was established in 2001. Anything sold by Japanese makers labelled as Kimchi had to undergo the proper fermentation process, and use real seasoning. In exchange, the Japanese were still allowed to keep on using additives such as citric acid and xanthan gum.

Japan still maintains that Korea should not expect to have a monopoly on making Kimchi (the Japanese attitude about what’s fair might change sharply, of course, if South Korea were to start pumping out Kobe Beef.)

“Kimchee and bugoki [sic] are two dishes being served to the American eating public for the first time by South Korean chefs. Kimchee is a combination of Chinese cabbage, onions, turnips and spices, while bulgoki is thinly sliced beef cooked over charcoal, also with many spices.” — Associated Press. Bill of Fare at the [World’s] Fair. Billings, Montana. The Billings Gazette. Wednesday, 8 April 1964.

This web site generates income from affiliated links and ads at no cost to you to fund continued research · Information on this site is Copyright © 2023· Feel free to cite correctly, but copying whole pages for your website is content theft and will be DCMA'd.
Tagged With: Korean Food