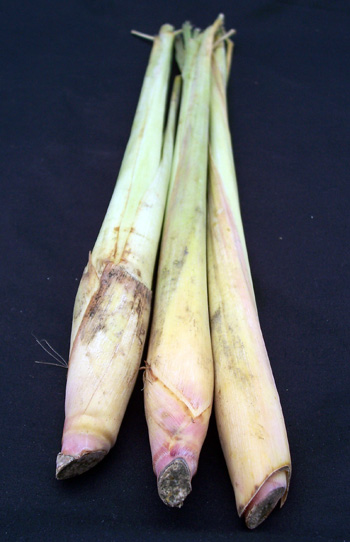 Lemon Grass is an herb that can grow up to 5 feet high (1 ½ metres.) It is a perennial in warm climates. It may overwinter indoors if you let it go dormant, but it doesn’t always make it.

It has a bulbous base and long, tough leaves. It almost looks like a green onion (or spring onion), except that the bulbous base is more of a very pale green rather than white.

Lemon Grass has a very subtle lemon smell in it from an essential oil in it called “citral.” Most of the lemon smell is around the base.

If you see any stalks of it in your food or soup in Thai food, you’re not meant to eat them — only a horse or a cow could chomp through them. Just set them to the side of your plate. The purpose of Lemon Grass in cooking is the same as that of bay leaves — to add aroma.

When buying fresh Lemon Grass, choose ones with firm, pale green stalks. Don’t buy any with a base that is shrivelled or that is browning.

You can also get it dried or frozen (at some Asian stores.)

Dried, powdered Lemon Grass. Used in soups and in curry pastes. English-speaking foodies sniff in the general direction of Sereh, saying “you know, you should always use fresh”, but clearly not even Asians can get Lemon Grass fresh all the time, because they’re the ones who make this powder in the first place.

You don’t actually eat the grassy part, because the herb becomes tougher and more fibrous the further up you go. You use the base.

Cut the bottom root portion off the base, then peel away the tough outer leaves. Chop or slice inner core of base very thinly crossways. When chopping, discard any brown bits. The rougher you are on it when chopping, the more aroma you will release (some recipe writers will have you bash it with a meat pounder.) The aroma will stand up well during cooking.

You can also just add a stalk whole to a dish while cooking and then remove and discard it. Or, to create a Kodak-moment, serve it to your guests as is, and watch them try to chew through it, as you probably did the first time you had it.

To substitute for 1 fresh stalk, use either 1 dried stalk, 1 teaspoon of Sereh powder, or a strip of lemon zest. Or, Lemon Balm or Lemon Myrtle added at the end of cooking.

Wrap fresh Lemon Grass in tin foil and refrigerate up to two weeks. It freezes well (the freezing even softens it.) It’s best to chop it all up before freezing, so that it is ready to go when you need it.

This web site generates income from affiliated links and ads at no cost to you to fund continued research · Information on this site is Copyright © 2022· Feel free to cite correctly, but copying whole pages for your website is content theft and will be DCMA'd.
Tagged With: Asian Food, Lemon Herbs