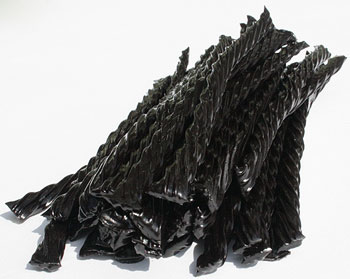 Most people either love liquorice or hate it. Fewer are the people who are neutral about the taste.

Liquorice is the root of a perennial shrub that above ground grows up to 3 feet tall (1 metre.) The leaves are feathery, and it produces light violet-blue flowers. The tap root grows down as far as 3 feet (1 metre); from it, rhizome “roots” can spread out underground up to 20 feet (6 metres.) The bark of the root is even sweeter than the inside of the root.

The plants need to be let grow for 3 to 4 years before harvesting. Both the tap root and the rhizomes are harvested. When freshly harvested, the root is a yellowish-brown. The roots are dried, then crushed, boiled and pressed. The process concentrates the juices and extracts a thick black syrup that looks like treacle, which is pure “liquorice.”

Liquorice was used in Egypt in 2000 BC. Pliny, the Roman writer, thought it was native to Sicily. For the most part in the past, it was regarded as a medicine. In the 1800s, you bought it from chemists and apothecaries.

Unlike many other herbs and plants, knowledge of it was not lost through the Dark Ages.

The Glycyrrhiza part of the various botantical names for liquorice comes from the Greek words “glukos” meaning sweet, and “riza”, meaning root. “Glycyrrhiza” is how Greek writers referred to it.

The Romans pronounced the Greek word “Gliquiricia”, and then “Liquiritia”. By the 1300s, the word was further simplified to Lycorys in Old French, and then arriving at “liquorice” in English. Americans simplified the word further to “licorice”.

This web site generates income from affiliated links and ads at no cost to you to fund continued research · Information on this site is Copyright © 2022· Feel free to cite correctly, but copying whole pages for your website is content theft and will be DCMA'd.
Tagged With: Ancient Egypt, Ancient Greece, British Food