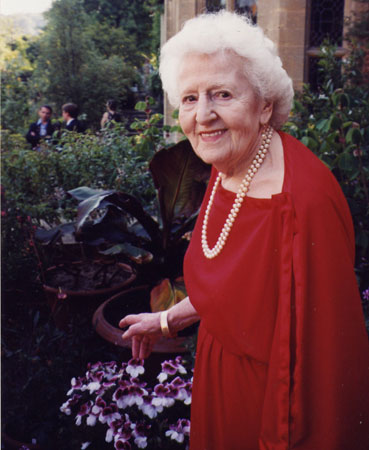 Marguerite Patten (1915 – 2015) was an English home economist and food writer whose career spanned many decades. She came to prominence in the 1940s during the Second World War, but continued working until 2011.

Marguerite Patten had a very long career in the United Kingdom, writing about and teaching about food. Though she turned 85 in 2000, she was still working on books and magazines, despite being struck by arthritis later in her years, which she brought under control by diet. She continued to work until a stroke in 2011. Prior to that, she lived in Brighton, East Sussex and then moved to Richmond, Surrey in 2012.

Very unpretentious, Patten always made it clear that she was a “home economist, not a chef”, though her favourite food books were those by Escoffier and Elizabeth David.

It was during the Second World War that she came to national prominence, working with the war effort on the home front helping people to eat well despite a limited range of goods. She was called “the Queen of ration book cuisine.” And, as prosperity eluded the UK after the war, she even popularized cooking with SPAM in the UK in the 1950s.

As of 2006, she had published over 169 cookbooks, with over 17 million copies altogether being sold, making her one of the best-selling cookbook authors of all time.

Patten was born 4 November 1915 as Hilda Elsie Marguerite Brown in Bath, England. When she was young, her family moved to High Barnet near London in Hertfordshire. Upon her father’s death in 1928 when she was 13, her mother, who had been a teacher, went back to work. As the eldest daughter, helping her working mother out with the cooking at home fell to her. Marguerite liked cooking, and when she left school, did a cooking course, then got her first job as a junior home economist at the Eastern Electricity Board.

Despite her early start at the career that would eventually bring her national recognition, she decided early on to try to pursue a more glamourous path, and so left her job with the Electricity Board, and joined an acting company, with the stage name of Marguerite Eve. She stayed with them for an entire nine-month season, during which she performed at Hampstead’s Everyman Theatre and at the Oldham Repertory. With the season ended, though, and her out of work and needing money, she went to work for Frigidaire (the refrigerator company) as a senior home economist, doing demonstrations, aided by her acting skills. Her job was trying to persuade British housewives that they needed a refrigerator. She said it was very hard-going.

This web site generates income from affiliated links and ads at no cost to you to fund continued research · Information on this site is Copyright © 2022· Feel free to cite correctly, but copying whole pages for your website is content theft and will be DCMA'd.
Tagged With: British Food, British Wartime Food