Marmalade is a clear fruit jelly with citrus rind suspended in it. Ideally, the taste combination should be a combination of sweet and sharp bitterness.

Though variations now exist which range from carrot to pineapple to Rangpur Lime marmalade, purists insist only three ingredients are present in proper marmalade: water, sugar and bitter oranges from Seville.

There are many recipes for making even the classic water, sugar and orange marmalade.

A standard method is to juice the fruit, then add water and the citrus fruit skins to the juice. The mixture is allowed to sit overnight, then is boiled. After the boiling, ⅔ of the skins are then discarded. The remaining ⅓ are sliced finely or chopped, and added back in. The mixture is then reboiled until it thickens, then bottled.

In 2010, sales of marmalade fell in the UK. The grocery research firm, Kantar World Panel, said that sales of marmalade fell 2.8 % (equivalent to 800,000 fewer litres or 2.5 million fewer standard sized jars), being displaced by peanut butter and chocolate spreads. Chocolate spreads sales increased 8 %; peanut butter sales increased 7.5 %. Marmalade, the study said, is suffering from an image problem of being for old people: more than half the consumers of it are over 65 years old. Children are preferring peanut butter or a chocolate spread such as Nutella on their toast. [1]

Marmalade reaches its setting point at 105 C / 220 F. But to test if it really will set for you, place a spoonful on a small plate in the freezer for a minute, then run your finger through it. If it isn’t thick, and a bit wrinkly on the surface where you ran your finger through, it needs more cooking. Just before bottling, however, let marmalade stand in the pot for 20 minutes, then stir and bottle. This gives the jam time to thicken enough so that the orange in it will be evenly distributed.

You can make marmalade from frozen oranges (sic.) If you have oranges on hand that you’re not going to get around to eating, or spot some Seville oranges at the store but don’t have time just then to fire up the old jam kettle, you can pop the oranges in a freezer bag and freeze them whole (just wash them first.) Thaw them first before beginning your marmalade recipe. To compensate for any pectin that might have been destroyed during freezing, add to your recipe 1 extra orange per 450g (pound) that the recipe calls for.

Some people suggest that if you are worried about the thickening but don’t want to be caught out cheating by adding pectin, that you can give the pips an extra boil on their own to release more pectin.

Marmalade evolved from a dessert made in Portugal from quinces. The Portuguese called this dessert “marmelada”. They started exporting it to Britain in the 1400s. It was a solid paste, like today’s Guava Paste, but flavoured with musk and rosewater that you would cut and serve in slices at the end of fashionable meals. In Elizabethan times, it was cut into fancy shapes. 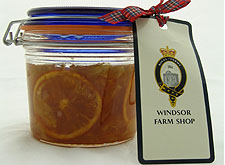 By the 1700s, it had changed to being a jelly made in Britain from oranges. It was Scotland that developed the spreadable version. By the 1800s, the Scots had switched to using Seville Oranges — which were cheap, because they were so bitter that no one else wanted them. The French and the Spanish thought they were absolutely mad.

Fortnum and Mason’s oldest marmalade recipe is for their “Burlington Breakfast Marmalade.” They were given the recipe in the 1730s. Fortnum’s however, didn’t actually make it, or sell marmalade already-made, until the First World War. Instead, they sold sugar, and citrus fruits, and the expectation was that their customers’ kitchen staff would use those ingredients to make it. With the advent of the war in 1914, they began selling jams and condiments made up for shipping to gentry officers on the front. The preserves were packed in tins, though, in order that the goods could better survive the wartime shipping to the battlefronts. [2]

Frank Cooper’s Oxford Marmalade was first made in 1874 by Sarah Cooper, wife of Frank Cooper, who owned a small grocery store. Frank liked her marmalade so much that he decided to sell it — named after himself, of course. It was sold for decades in small, white earthenware crocks, but now is sold in glass jars. To keep up with the growing demand, a marmalade factory was opened in Oxford in 1900. Oxford graduates from around the world took home with them a taste for Cooper’s Marmalade.

Oxford-style Marmalade is darker, and is cooked longer. Some people don’t like it, because they feel that the longer cooking time obliterates the freshness of taste.

On the day the Titanic sunk, the first class passengers were to have been served Keiller’s Dundee Orange Marmalade that morning for breakfast. Reputedly, a passenger named Edwina Trout was also transporting a “Marmalade Machine.” 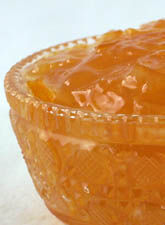 “Again the [Frank Cooper] Oxford vintage, this a 1943-pack marmalade for the connoisseur, made only in vintage crop years, matured four to five seasons. The vintage year preceding this was 1933. These marmalades have deeper color, better body, greater richness than the usual year-by-year run.” — Paddleford, Clementine (1898 – 1967). Food Flashes Column. Gourmet Magazine. November 1948.

“The WI [Ed: Women’s Institute] does not approve of the dark, thick Oxford variety, which is either overcooked or contains molasses… The WI turns its collective nose up at such fare. The long-cooking of naturally tawny marmalade destroys the freshness of the orange flavour. “Overcooking kills marmalade,” says Mrs Lamb. “It makes it taste syrupy or jammy. It’s the mistake most people make.” — Vallely, Paul. Marmalade: Why it isn’t yet toast. London: The Independent. 16 February 2008.

Comes from the Portuguese word “marmelada” which was a quince paste. “Marmelo” is Portuguese for quince.

A “marmalade madam” was a prostitute.

Vallely, Paul. Marmalade: Why it isn’t yet toast. London: The Independent. 16 February 2008.