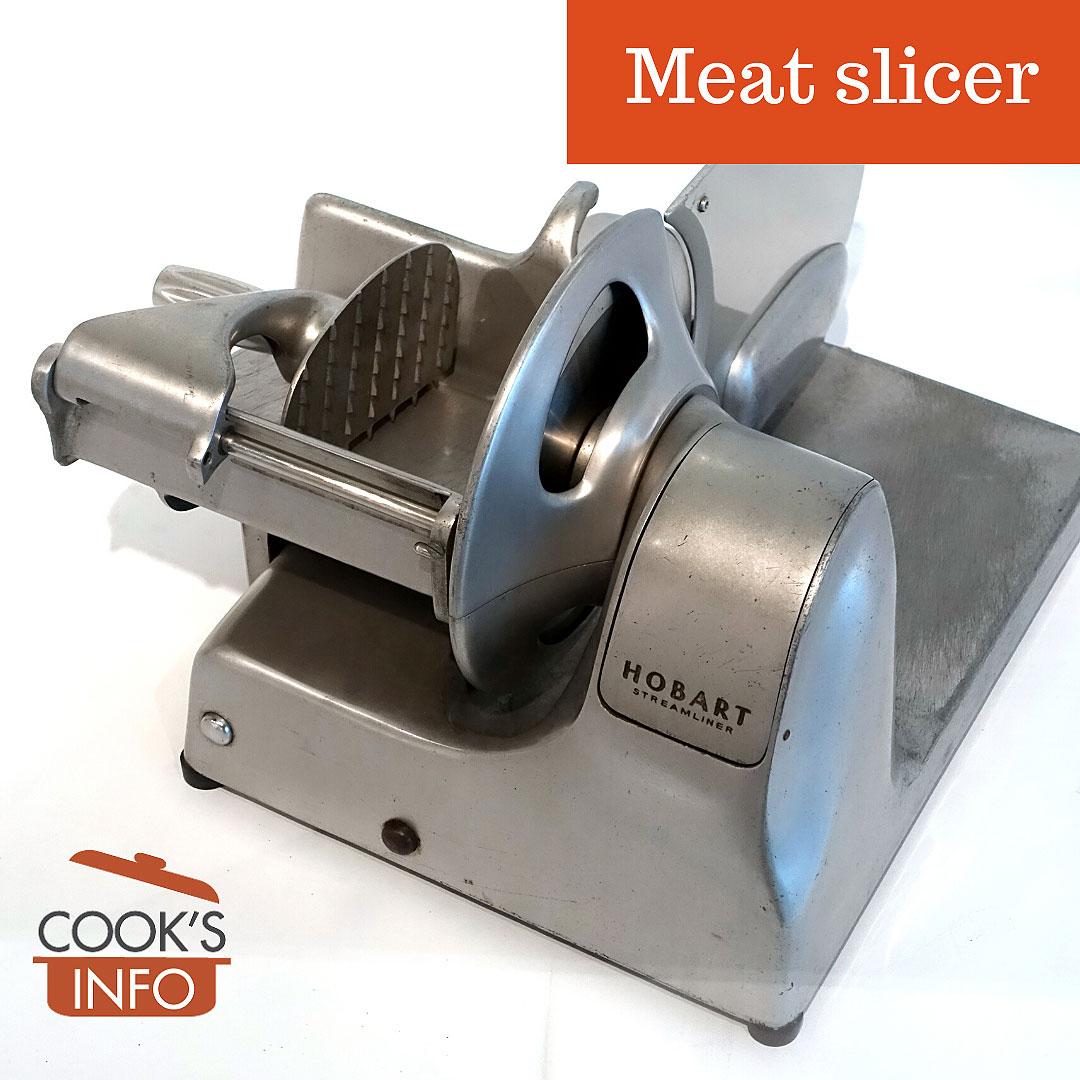 A meat slicer is a machine, powered manually or by electricity, designed to slice meat. It can also be used to slice other food items such as firm cheeses, cabbage, other produce, etc.

The meat being sliced can be hot or cold, and can be sliced thinly or thickly. Typically, a meat slicer is used to slice already-cooked, cold meats into thin slices for sandwiches.

For home use, there are two reasons to consider a meat slicer. The first is that a good slicer releases the tastes and textures of meat, much better than thick hand-cut slices can do. The second is that it can save money: pre-sliced meat from delis and the supermarket can cost three to four times the price of buying a whole piece of meat, cooking it, and slicing it for sandwiches yourself at home.

The more powerful a meat slicer machine is, the more expensive it will be.

Most entry-level home meat slicers seem to offer a 18 cm (7 inch) blade. This is a medium-slice blade, and may mean that you have to cut some joints of meat down to size before you can put them through. 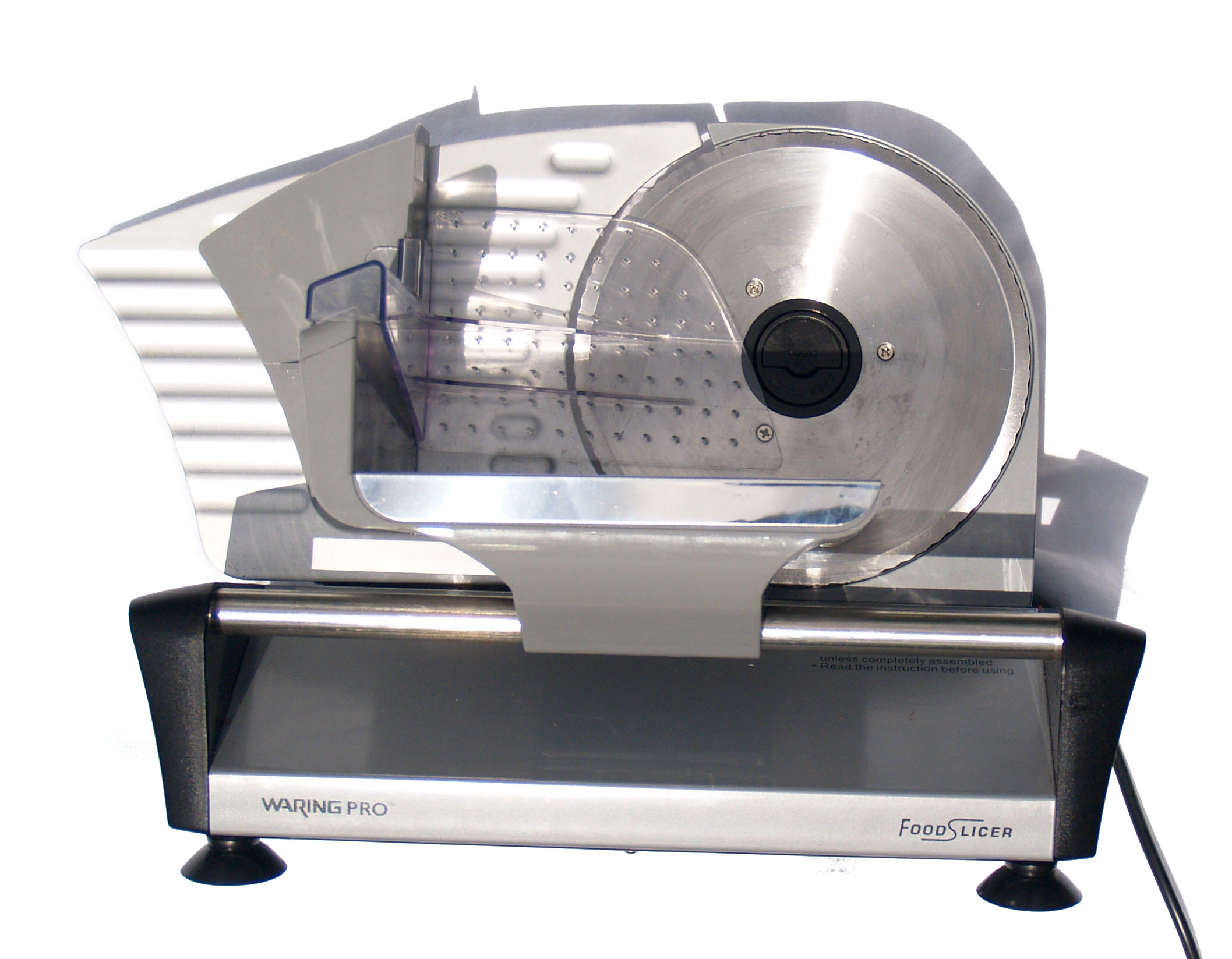 Living with a meat slicer

When buying a meat slicer, be sure to picture, and ask if possible, what you would have to do to clean it. Some can take 7 to 8 minutes to clean up because they have to be completely disassembled, base included, for clean up. Many, oddly as it seems, don’t offer any parts that can be chucked into the dishwasher. If clean up is a lot of work, you may find yourself avoiding using your expensive piece of kitchen equipment.

Consider, too, if you want your meat slicer to live on the counter. Some models may take up too much counter space, but yet be too heavy to be always putting away between uses.

Most modern meat slicers are electric, but older ones were crank operated. Rather than seeing the hand cranking as a drawback, some chefs say good quality manual machines can be better: they can cut thinner slices than electric ones, and because the blade turns more slowly, there is less friction, and therefore less heat to affect the taste of what you are slicing.

Vintage hand-cranked models such as those made by Berkel are much sought-after, as they are considered the cream of crank operated meat slicers. The body on them is a fire-engine red, and the blade on them is concave. Refurbished ones cost cost $7,500 to $25,000 (2005 prices.) The line has been revived, and is headquartered in Troy, Ohio.

Commercially, there are spiral cutters that produce the spiral-cut hams sold in North America. A company that makes them advertises that you can charge a 165% markup on a ham that has been spiral cut. [1]”Our studies indicate a fast payback for T-2000 with many retailers averaging up to 165% mark-up, paying for the “Spirocutter” in one day!” https://www.4mmc.com/spirocutter-t2000  Accessed September 2010.

The credit for first slicing machine is given to Wilhelm van Berkel of Rotterdam, in 1898. It was hand operated. 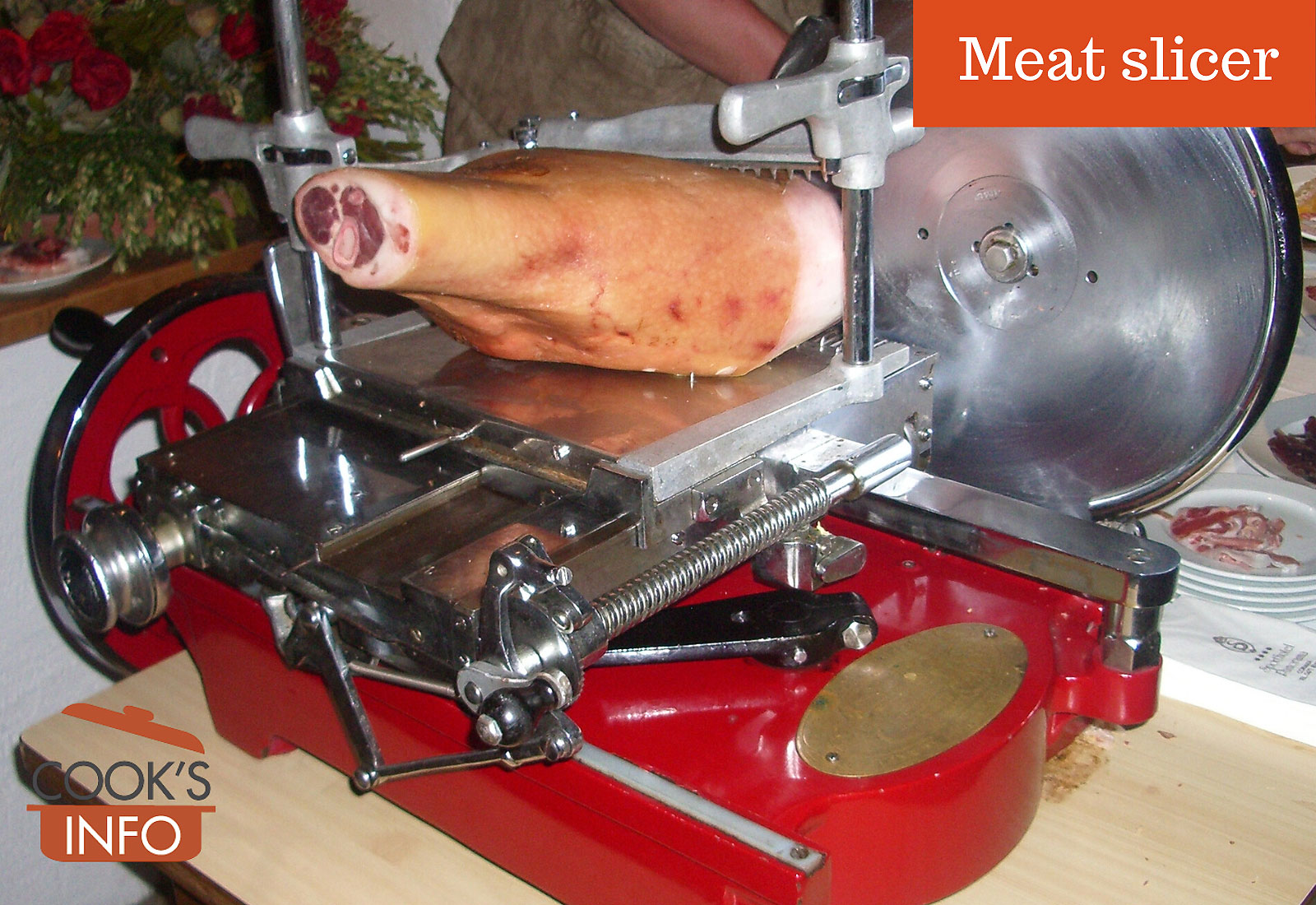