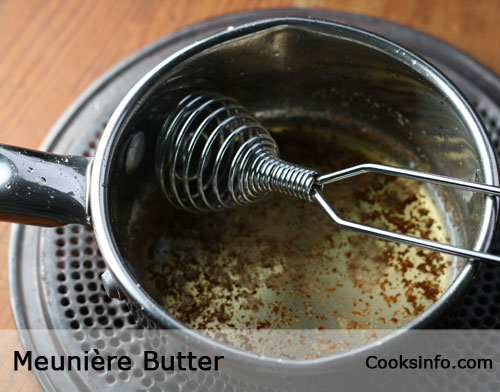 You make it by melting butter until it has started to brown, and seasoning it to taste with salt, white pepper and a few drops of lemon juice.

It’s used in fish “à la meunière” dishes, and for some vegetables that have been either poached or cooked in butter.

You want white pepper rather than black as the white has a more winey taste that compliments the butter, and the black would look like fly specks in this.

The butter will appear to brown more after you add the lemon juice to it. The butter will develop brown bits in it; don’t strain those out. Those are the flavour bits you are working to develop.

In this regard, it’s the opposite of Indian “ghee butter”, where you strain the solids out deliberately so that there are none to brown.

This web site generates income from affiliated links and ads at no cost to you to fund continued research · Information on this site is Copyright © 2023· Feel free to cite correctly, but copying whole pages for your website is content theft and will be DCMA'd.
Tagged With: French Sauces