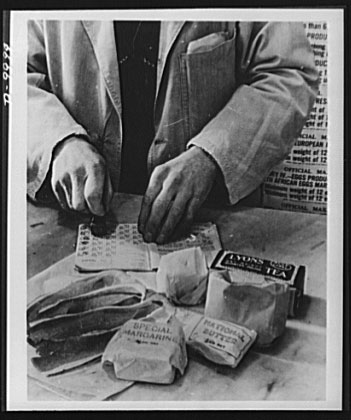 Contents hide
National Margarine was a national margarine commissioned by the British Ministry of Food during World War Two.

There were actually two kinds of National Margarine: Special, and Standard. Both came in waxed-paper wrapped blocks.

The Special cost more, 9d a pound, compared to Standard, 5d a pound.

The Special was the more popular as it was felt to be the better grade, but the flavour and texture of it, some felt, wasn’t “special enough” proportional to its almost doubled price over the Standard, and didn’t improve any as the better quality ingredients required to make it got in shorter supply and lower level ingredients had to be used owing to wartime shortages. Sales of the standard slowly declined, and it appears to have been discontinued by 1953, so that only the “Special Margarine” remained.

The oils used to make the margarines varied depending on what was available when. Sometimes they contained fish oil, euphemistically referred to as “marine oils.”

There was also a version which was both kosher and vegetarian.

Some would mix the National Margarine ration with their butter ration, to try to improve the taste (though some said it just made the butter taste worse.)

All versions of the margarine — Standard, Special, and kosher/vegetarian — contained added Vitamin A and D, to bring it up to the nutritional value of butter.

British consumers were “lucky”, in a way, to have access to margarine as a butter substitute during the war. In other Commonwealth countries such as Canada and New Zealand, consumers did not, as margarine was flat out illegal, to protect dairy monopoly interests.

“Mr. Peter Freeman wanted to know the proportion and content of each ingredient in each variety of margarine. Dr Charles Hill informed him on March 2 that the main variety, known as “special” margarine, contained hard and soft vegetable oils and marine oils in proportions which were frequently varied according to the supply and the time of year, as well as milk, salt, flavouring and vitamin. The only other variety on sale to the public was kosher and vegetarian margarine, which contained no marine oil, milk, salt or flavouring.” — British Medical Journal. Medical Notes in Parliament: Margarine Content. March 14, 1953. Page 627.

This web site generates income from affiliated links and ads at no cost to you to fund continued research · Information on this site is Copyright © 2023· Feel free to cite correctly, but copying whole pages for your website is content theft and will be DCMA'd.
Tagged With: British Food, British Wartime Food, Rationing, Second World War