When we think olive oil, we tend to think of Italy, though equally good ones are produced in Spain, Southern Greece and in North-West Crete.

Even though Italy and in particular Tuscany produce some of the world’s greatest olive oils, or at least some of the best marketed good ones, these aren’t the ones filling the shelves at our supermarkets. Not all olive oil labelled Italian is Italian. The Filippo Berio company in Lucca, Tuscany brings much of its olive oil in from Greece, Spain and Tunisia in tanker trucks (as of 2004) because Italy can’t produce enough olive oil for its own needs, let alone for export. Bertolli olive oil does the same, though Bertolli is not actually sold in Italy: the company produces olive oil under another name for the Italian market.

The consumer isn’t necessarily getting an inferior product, or being misled. Spanish and Greek olive oils can be as good or bad as the Italian ones, and the bottled olive oil is Italian to that extent that it’s blended and packaged in Italy, and has an Italian origin stamped on it. But no where does it say the oil is actually made from olives grown in Italy. Consumers in North America and Italy tend to pay a little extra to get Italian olive oil and leave any bottles of ones labelled Spanish languishing on the shelves, because we’ve been taught that Italian is the one to buy. In actual practice, if you’re paying a lot of money for an Italian olive oil in a very fancy bottle, chances are that it really is from Italy. Normal consumer price range olive oils, however, that are packaged in a way to give an impression of actually being Italian, are probably not really worth the price difference between them and Spanish olive oil, particularly given that they may be Spanish olive oil.

As of 2012, annual per capita consumption of olive oil is: Greece, 24 litres; Spain, 15 litres; Italy, 13 litres; Canada, 1.5 litres; USA, 1 litre. Overall, though, America is the third-largest olive oil purchasing country in the world: Italy consumes 21% of the world’s production, Spain 19%, and America, 9%. These overall figures would of course reflect the size of the country’s population. [1]

In 2008, olive oil fraud investigations in Italy led to the arrest of 23 people, and the discovery that €39 million Euros of olive oil sold as Italian was actually from non-Italian olives. They also caught people claiming EU farm subsidies for growing olives, even when they had imported the oil from elsewhere. [2]

There are basically two sets of International Rules as to how olive oil is graded, the EC (European Community) rules and the International olive oil Council (IOOC) rules.

Olive Oil is not always made from green olives, as some people presume. It can also be made from olives that have fully ripened to black. Heat and water are often used to extract maximum amount of oil from these Black Olives. It is very acidic, so the oil is then neutralized. The process leaves basically no flavour, so it’s topped up with some virgin or Extra-Virgin oil.

Some olive oils are bottled — and priced — like expensive wines. To taste olive oil, put a very small amount in your mouth, about 1/8th teaspoon, and roll it around in your mouth. Count to 6, spit it out, then take note of what you tasted at the start, in the middle and afterward. Some people feel that good ones will taste just a bit peppery at the end, but leave no taste other than that, but preferences will vary.

Extra-Virgin and Virgin olive oils are extracted without the use of chemicals. They are cold-pressed, not meaning refrigerated, but meaning done without heating the olives (though given that most pressing is done in the winter, producers are allowed to bring the olives back up to room temperature.) If you see any extra-virgin and virgin olive oils trumpeting the fact that they are also cold-pressed, that’s just marketing redundancy. Of course they are cold-pressed; that’s part of their definition.

Virgin olive oil, with its longer shelf life, and regular olive oil, which can be used for cooking, may actually be better choices to keep on hand as stock oils than the Extra-Virgin olive oil which Foodies always parrot on to us as being the only one to even consider. It’s such an overused term anyway: it is no actual indication of quality or a great oil, nor is it the right oil to always be using.

Extra-Virgin is just an indication of the process — it doesn’t necessarily guarantee you a great olive oil. To make the oil, the olives are mashed into a paste called the “pomace.” The pomace is then poured into a press and pressed to force the oil out. The oil is filtered, let settle, then filtered again.

Some pomaces are pressed between millstones, some between metal crushers. Some people say metal alters the flavour.

To qualify as Extra-Virgin, the acidity of the oil must be less than 1% acidity. The lowest possible acidity is .225%. To get this low, the olives have to be pressed within 1 day of harvest.

The lower the acidity, the higher the quality. The oil will have a very olivey taste. Use it as a flavouring and accent oil. It has a smoke point of 406 F (208 C.) Store the oil only for a few months, use up by then.

This might be a good one to keep on hand instead of Extra-Virgin olive oil if you are an occasional user of an olive oil for flavouring purposes only. It’s slightly higher acidity level gives it a far longer shelf life than Extra-Virgin: you can store it for up to two years. It has a smoke point of 420 F (215 C.)

For regular olive oil, extraction methods are used to get the remaining oil out of the olives, after the first pressing has got out the Extra-Virgin. Usually, a bit of Extra-Virgin is added to give flavour and colour — it will constitute about 5 to 10% of the total product when done. This is a good olive oil to cook with. It has a smoke point of 438 F (225 C.) 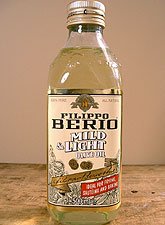 Light olive oil is olive oil to which no Extra-Virgin has been added, keeping the colour and taste light, providing a more general purpose oil for use in cooking where you don’t want a true, heavier olive oil taste to come through.

It is also filtered.

The “Light” refers to the taste, not to the fat content. It has a higher smoke point than other olive oils, even Regular olive oil, so it is very good to fry in.

New on the market (as of 2003), this type of olive oil is a very dark green colour and is very flavourful. Because very young olives don’t have as much oil in them as more mature ones do, more olives have to be used, making this oil more expensive.

While pure is a good indicator in other foods, when applied to olive oil it equals commercial grade. Organic solvents are used to extract oil from the whole olive, including pits. The pure just means nothing else mixed in. Because it’s far blander in taste, it is good as a cooking and frying oil.

After all other grades of oil are extracted, solvents are then used to get what oil is still present. The solvents are organic solvents such as hexane, which are also used in extracting oils such as canola, corn, safflower and soy oil. The oil is then refined, and blended with some higher grades of olive oil to put some taste back in. It cannot legally be called olive oil; it must be called “Pomace Oil.” It is fine for frying in. It has a smoke point of 460 F (238 C.)There was a recall scare in 2001 with some pomace oils from Spain, but the production techniques were corrected after that.

Olive olive loses its flavour at 140 F (60 C). So, don’t waste expensive extra-virgin olive oil in cooking, as the taste will be gone, anyway.

Don’t fry with them extra-virgin or virgin olive oils, as their smoke point is too low. For the same reason, don’t use them in marinades.

Store in a sealed container in a dark, cool place. olive oil shouldn’t be refrigerated, but if it is, it will become cloudy and may develop white flakes. Restoring it to room temperature will make it clear again and the white flakes go away. It will not affect the flavour.

If you want to buy in bulk for the savings but it’s too much for you to use, consider splitting with friends.

Olives were first cultivated in the Middle East. Cultivation probably didn’t reach Italy till in the 700s BC, brought by the Greeks to Southern Italy.

The Egyptians imported olive oil from the area that is now Syria and Palestine.

By 65 AD, production on the Italian peninsula was no longer enough to meet Roman demand. Importation started from Spain — a situation which continues today.

While olive oil is highly valued now, it had an importance far beyond today’s as it was pretty much the only oil — and was used for non-food purposes as well, such as lighting. Rome spread the market demand throughout the known world. The demand eased when Rome collapsed, and northern areas went back to using animal fat and other oils.

Until about the 1960s, you could really only find olive oil in the UK at chemist shops (pharmacies).

“An American going inland from the Atlantic coast is often surprised to find that olive oil, instead, of being served on every table, is exceedingly disliked.” — Rose, Mary Swartz. Everyday Foods in War Time. New York: Columbia University. 1918. From Kindle edition, 2012-05-16. Page 21.