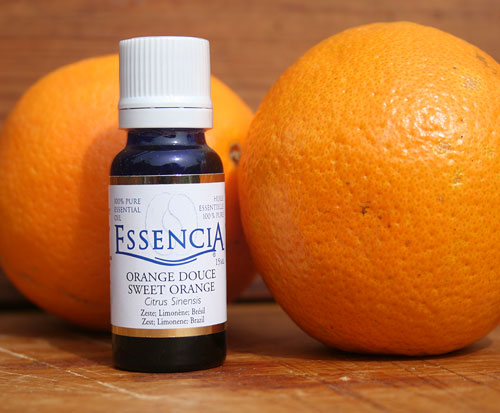 Orange Oil is made from orange peel after oranges have been juiced.

It is soluble in water, and has a concentrated orange smell and taste.

Orange peel has two layers — the inner white one called the pith (aka “albedo”), and the actual orange zest layer, called the “flavedo.” It’s in the zest that the oil is contained.

The oil can’t be extracted via methods involving heat, as that changes the taste to a harsh one. It must be cold-pressed.

Orange Oil is expensive, but you use very small amounts at a time in baking, in marinades, and to enhance orange juice.

Some people say not to use plastic measuring spoons with Orange Oil, as it may degrade plastic, but then, Orange Oil is often sold in plastic bottles, which seems to refute this argument.

Some say that the concentrated orange taste of Orange OIl saves having to run out to buy fresh oranges, that you might only use the zest of for a recipe and then let the rest of it deteriorate in the fridge.

Use Orange Oil sparingly in any recipe calling for orange zest.

For 1 tablespoon of orange zest or grated orange rind, you can use instead ½ teaspoon orange oil, or vice versa.

This web site generates income from affiliated links and ads at no cost to you to fund continued research · Information on this site is Copyright © 2022· Feel free to cite correctly, but copying whole pages for your website is content theft and will be DCMA'd.
Tagged With: Oranges