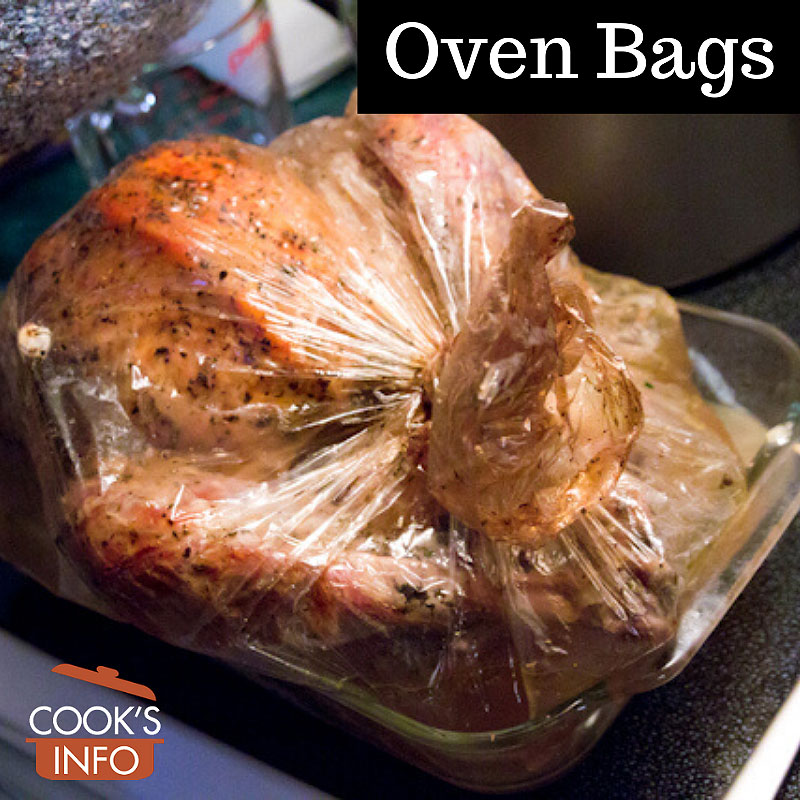 Oven bags are bags designed for foods to be put in then cooked in the oven.

They are made of nylon or polyester that is heat-resistant, generally up to 200 to 230 C (400 to 450 F.) Read the directions on the box of the brand you have purchased to see what heat it can stand.

After cooking, no clean-up is needed as they are single-use only, so you discard the bag. They also help reduce oven clean-up needed, because they contain any splattering of juices that occurs while cooking.

Some people say that food cooked in oven bags doesn’t taste as good as plain old roasting, and that the food always tastes steamed.

Oven bags are used mostly for large joints of meat and for whole poultry. They seal in steam, causing the meat to baste itself. Many fans swear by them for keeping turkey juicy. Poultry skin won’t get as crisp as normal oven baking, though.

Some people like to bake bread in oven bags. They let the bread dough do its first rise normally. Then they shape the bread, put it in the bag, seal the bag, and putting it on a baking sheet and let the shaped dough do its second rise. When risen and ready to bake, you poke or cut a few holes in the bag. Fans say the steam in the bag helps the crust, particularly for French breads.

You can also use oven bags in a microwave, if that is your preference. 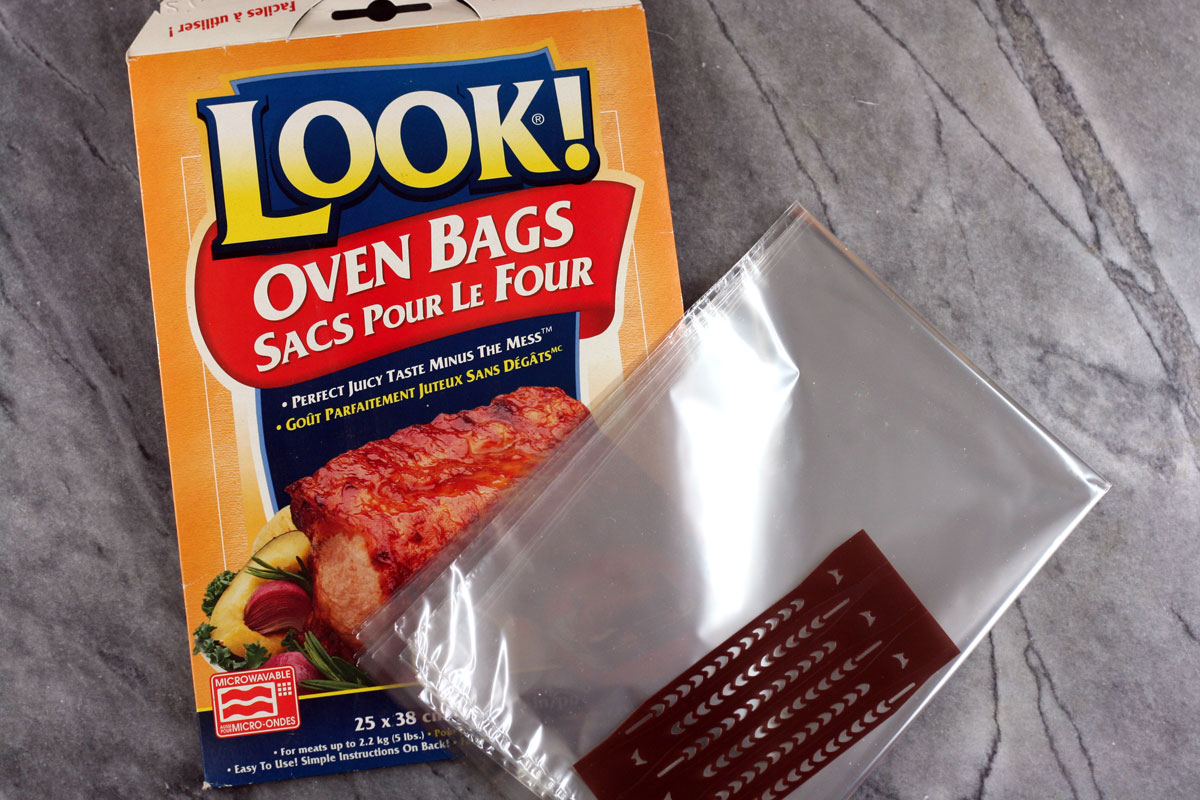 To cook with an oven bag, you first add a tablespoon or two of flour into the bag, and shake it up to dust the sides. The flour causes fat and juices to blend, thereby helping protect the bag from bursting. You then put the meat in, along with any seasonings and vegetables you wish. You tie the bag up with the twist tie that will be provided, and so that excess steam can escape, make a small cut in the bag, or poke some fork holes in it.

Place it all on a baking pan and put it in a heated oven. Yes, you will actually need a baking pan, not just a baking sheet, and the pan should be about 5 cm (2 inches) deep, to support the bag as it fills with juices — you don’t want the edges of a grease-filled bag flopping over the side where they might possibly come in touch with a heating element, melt and cause a grease fire.

If making pot roast in an oven bag, and consequently cooking at pot roast temperatures, the meat will brown somewhat but won’t look quite as nice as it would otherwise. So, even though the directions don’t always say this, brown the beef at first as you normally would anyway on the stovetop, then pop it in the bag. You will get similar results to the pot roast recipes that had you wrap the joint up in tin foil. A package of French onion soup can help give nicer colour.

To check the temperature with an instant read meat thermometer, just poke it through one of the slits or holes that you made in the bag. When the meat is done, remove the baking pan from the oven, and let it rest for 15 minutes. Then with kitchen scissors, cut the bag open and lift the meat out.

Manufacturers of oven bags don’t recommend their use in slow cookers. They recommend instead the oven bags’ “cousin”, slow cooker liners: “Reynolds® Slow Cooker Liners were specifically developed and sized for use in slow cookers, while Oven Bags were designed and sized to hold large cuts of meat for pan-roasting in the oven. There is enough of a size and shape differential between the products that we recommend using each product for its intended use.” [1]Reynolds Kitchens: Products: FAQ. Reynolds® Slow Cooker Liners. Retrieved February 2011 from http://www.reynoldspkg.com/reynoldskitchens/en/faq_detail.asp?info_page_id=748&prod_id=3200&cat_id=1337

Don’t use oven bags for the following applications

Reynolds Kitchens recommends that their oven bags should only be used either for conventional baking in conventional ovens, or for microwave cooking. They specifically recommend against the following uses for oven bags:

Their concern is that the plastic would be exposed to extremes of temperature for which it is not certified as safe.

“Reynolds® Oven Bags are suitable for use both in conventional and microwave ovens. Oven Bags should not be used under the broiler, on top of the stove, on barbecue grills, in toaster ovens, in crock pots, in convection ovens, in electric roaster ovens, with racks, or as boiling bags. The possibility of exposing the bag to the heating elements or to heat extremes makes these cooking methods unacceptable for oven bags.” [2]Reynolds Kitchen Facebook Posting. 7 March 2012. Accessed November 2015 at https://www.facebook.com/ReynoldsKitchens/posts/10150609163446094

If you lose the twist ties supplied, you can’t use just any twist tie: they may melt or catch fire. Instead, cut a thin strip off the mouth of the bag, and use that to tie it with.

Don’t use oven bags in any kind of small oven where there’s a danger of the bag touching any of the heating elements, thereby melting, spilling out its contents and causing a grease fire. So that means no to most countertop ovens, electric roaster ovens, and to toaster ovens. 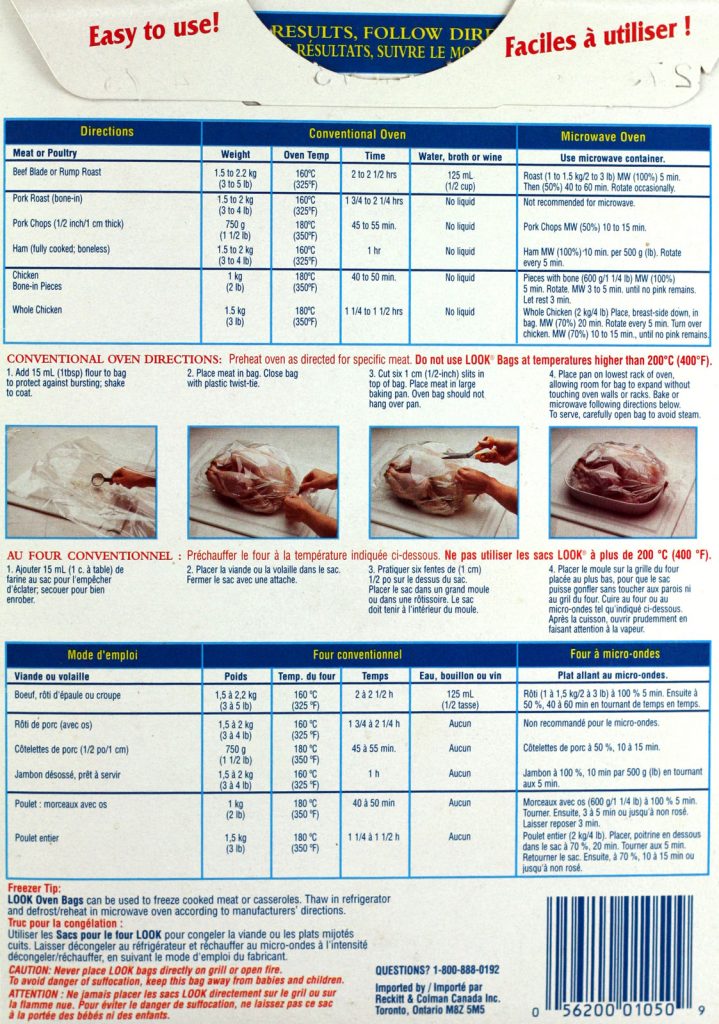