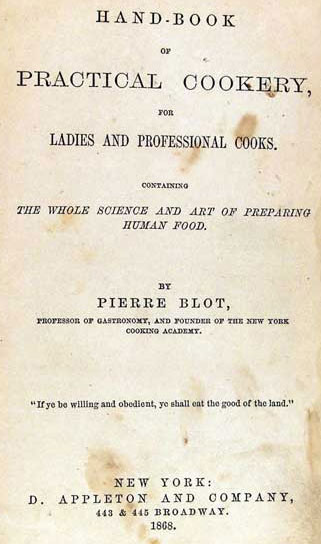 For a brief period, Pierre Blot was perhaps America’s first celebrity chef. He styled himself “Professor of Gastronomy.” He wrote cookbooks and ran a cooking school. Ultimately, he may have made a basic marketing error, though, of trying to teach upper-class ladies about food preparation at a time when they simply wanted their servants to learn how to do it for them.

Blot was born in France c. 1818. He arrived in America in the 1850s as a “political refugee” (according to the New York Times, 7 April 1865.) He couldn’t speak any English upon arrival, so he taught French for a living for a time. It appears, though, that he quickly taught himself English to get ahead.