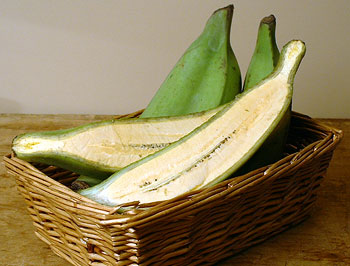 Plantains look like large, green bananas, to which they are related, and like bananas, they don’t actually grow on trees, they grow on large herb plants which grow big like trees. They are almost always cooked and almost never eaten raw (it would be like munching on a raw potato: not going to hurt you, but not going to be something your guests would rush back for.) You almost always see them sold green, which is not fully ripened, at stores and markets. At one point in their life, they are treated like a vegetable. At another point in their life, they are treated like a fruit.

Green Plantains are cooked up as we would a starchy root vegetable in savoury dishes. When the Plantains have ripened a bit, their skin turns yellowish like a banana, and the fruit starts to sweeten a bit, but the flesh is still firm, and the fruit is still treated as a vegetable for use in savoury dishes. By the time the Plantain’s skin has turned black, it is fully ripened and sweet, though never as sweet as a proper banana, and the flesh has softened: these Plantains are used in dessert recipes.

Like bananas, Plantain can only grow in tropical countries, and it is there that most of them are consumed. They are as big a staple in Latin America and Africa as potatoes are in Northern America and Europe.

“Hawaiian Plantain” is a newer variety that is squatter and easier to peel. 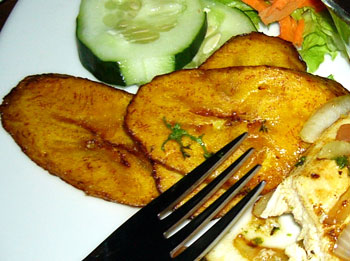 Plantain, unlike banana, keeps its shape when cooked.

Allow 1 plantain per person in whatever you are making.

You always peel Plantains before using. To peel, chop off each end, run a paring knife down one side to make a slit, then open up the slit and remove the skin. If any part of the Plantain oozes a white liquid, don’t let it get on your clothes. The liquid turns into a brown stain that will not come out, ever.

To boil them, wash, peel, cut into 2 or 3 pieces and boil under tender.

To bake, you can toss them in alongside roasts as we would sweeter veg like carrot or parsnips. They are used a lot in soups and stews.

They can be cooked as a dessert, with peeled slices pan-fried them in some butter, rum and brown sugar, then served over vanilla ice cream.

High in potassium, vitamin A and carbohydrates.

Store at room temperature for a few days until it reaches the degree of ripeness you need for what you are planning to do with them. Which is to say, if you’ve bought them green and plan to use them green, don’t be all week about it. If the Plantain is ripening too quickly for you, you can refrigerate for a few days.

Plantain, like banana, is believed to have originated in Indonesia. Bananas were brought to India, grown there, and it’s thought that they mingled with some wild plants there to form the Plantain plant. Sometime in the first millennium they arrived in Africa, and they along with banana were brought from West Africa to South America in the 1500s.

Plantain is not in any way related to or associated with the broadleaf weed called “Plantain” which often plagues our lawns.