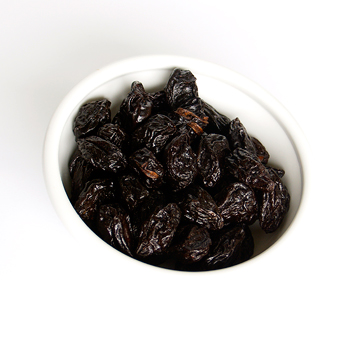 The Victorians loved prunes, and passed their love for prunes onto the next two or three generations, who successively thought of worse and worse ways to serve them, until now you have vast swathes of the population turning their noses up at the very thought of prunes, and only senior citizens have their Happy Shopper bags weighed down with canned sardines, cream corn and tinned stewed prunes.

Prunes ended up getting such a bad rap that the prune industry has given up on the name “Prune” altogether, is now starting to market prunes as dried plums or “plum raisins.” The California Prune Board has already changed its name to the California Dried Plum Board — hey, look what a name change did for Kiwi fruit (which used to be called a “Chinese Gooseberry”.)

And it’s really too bad. Prunes are actually a great dried fruit for cooking with, just as other dried fruits are. If someone were to suggest to you a Moroccan dish that had dried apricots in it, you’d be all ears. Prunes give many dishes a really subtle, winey taste and are a natural in savoury dishes.

Plums that are destined to become prunes are left on the tree much longer than plums meant for eating fresh. The extra maturing period on the tree allows extra sugar to develop in the fruit. To become prunes, they are harvested, dipped in a lye solution to help preserve their sugar, and then dried for up to a day. Up to four pounds (1.8 kg) of plums are needed to make 1 pound (450 g) of prunes.

Some prunes, after drying, are plumped back up with a bit of moisture before packaging (making them, in fact, semi-dried fruit.) Alternatively, some new processes are drying prunes down to only a semi-dried state (35% moisture.) This lets the prune retain a golden colour, (most prunes are blue-black) as the moisture didn’t go low enough for the sugar in it to caramelize. But while the colour is more appealing, the taste is not as good: the caramelization that occurs in fully dried prunes gives them wonderful caramel notes in their taste.

Most prunes come from plums from the Agen plum tree. This variety of plum was developed in France in the 1500s, and brought to America in the mid 1800s. It has very, very sweet fruit — and the sweeter the better, as just as a little sugar encourages fermentation, a lot discourages it, and you want prunes to dry, not ferment. And, as an important bonus, the Agen plum is one of the few plums that are freestone — the flesh separating easily from the pit. Thanks to those French trees that came to America, 70% of world’s supply today comes from California.

Even though they are a dried fruit, choose ones which are moist and pliable. Dried in this instance doesn’t mean petrified. Many people now think that the tinned prunes are ghastly, but they still have their fans.

If your prunes are unpitted, cut a slit in them with a paring knife and push the pit out and discard the pit.

If you need to rehydrate prunes, simmer them covered with a liquid in a saucepan for 10 minutes.

Prunes can be used as you would dates or raisins in cakes, breads or muffins. Pitted prunes are good in stews, in stuffings, and in sauces for meats.

Prunes are, like plums, a good source of fibre, potassium and Vitamin A. Prunes are also a natural laxative to keep you regular, as the old advice went, followed by a knowing smile.

Store in a sealed container in a cool place. You don’t want them to dry out, and you don’t want warm humidity to start them fermenting.

The Romans dried plums into prunes. Roman crockery vessels for shipping prunes have been found in England.

During the Second World War, prunes were popular with housewives coping with a strict sugar ration, but fell out of popularity after the war:

“Increasing stocks of prunes in local grocers’ shops are beginning to worry Derby retailers, who are puzzled by the sudden unpopularity of this dried fruit. In the way years, housewives complained because prunes were so often unobtainable, and when they could be bought, as often as not there was no custard to go with them. Today, custard powder from Holland is on sale in nearly every grocer’s shop and there are prunes aplenty.

But in spite of low price and points value (1 lb. costs 1 s. and takes only four points), prunes are just not selling.

‘It is odd that they should be so unpopular,’ said one retailer. ‘With sugar so scarce you would expect housewives to buy more prunes because they are easier on the sugar ration than most fruit.’

He added that one reason why they are selling in smaller quantities today might be a decline in quality since pre-war days. Prunes used to be graded carefully, and in the best varieties there were only about 24 to the lb. Today, prunes are much smaller, with sometimes more than 70 in a lb.” — Nobody wants the prune today. Derby, Derbyshire, England: Derby Daily Telegraph. Tuesday, 24 January 1950. Page 2, col. 3.

“Prunum” is Latin for plum. Italians and French people will still call plums “Prunes”, and at garden centres you may see “Italian Prune trees”, but in English, plum is the word for the fresh fruit and plum is what grows on a tree; Prune is the dried fruit that we make from the plum. But never mind: if the marketing associations have their way, we’ll be calling them dried plums soon, anyway.