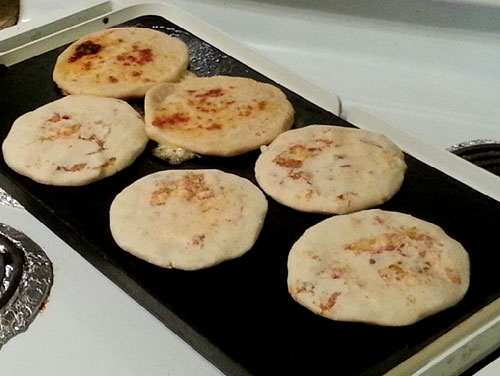 Pupusas are round breads made using white cornmeal flour and water, and cooked on a griddle. They are best eaten hot.

They are generally small, but can be made in different sizes, according to preference or need.

They are flat but relatively thick, but good ones should feel light, and be supple.

They are usually served with a stuffing in them. The stuffing can be cheese (usually “Quesillo”), meat (such as fried pork rind — aka “chicharrón” — or chicken), or refried beans, or a combo of all three (a combo of all three fillings is called “pupusa revuelta.”) Another popular filling is cheese with chopped loroco buds in it. Any cooking that the filling needs is done ahead.

Toppings served with them include “curtido”, a relish made of pickled cabbage with chile and carrots, and thin, mild tomato sauce Salvadorean-style “salsa roja.” Both types of toppings balance the richness of the Pupusa.

A place that makes and sells them is called a “pupusería.” It can be a store, or a street vendor: street vendors often still serve them on a banana leaf.

A “pupusa de arroz” is made from rice flour instead of corn flour. They have a plainer taste, but brown up more and get crunchier, and are stuffed with refried beans and cheese. These rice flour ones cost slightly more, but they are traditional in Olocuilta, El Salvador.

To make Pupusa, the corn meal and water are kneaded together to make a moist, firm dough. The dough is then divided into portions. An indent in made in each portion, filling put in each indent, then the dough is folded over to cover the indent. The Pupusa is then flattened out to about 12 ½ to 15 cm (5-6″) wide and about ½ cm (¼″) thick. They can be flattened by slapping from palm to palm, or with a tortilla press, or with a rolling pin. They are then cooked 1 to 2 minutes on each side until browned.

Pupusa can be served on their own with the condiments, or with sides such as beans and rice. You need at least 2 per person for a meal; 3 if nothing else is being served. They are meant to be picked up and eaten out of hand.

Pupusa are often served for dinner on Sundays.

Pupusa have been made by the Pipil tribe in El Salvador for millenia.

On the 1st of April 2005, the El Salvador Government created “Día Nacional de la Pupusa” (“National Pupusa Day”.) [Legislative decree 655.] Held on the second Sunday of November, the goal of the day is to promote the consumption and production of Pupusa.

This web site generates income from affiliated links and ads at no cost to you to fund continued research · Information on this site is Copyright © 2022· Feel free to cite correctly, but copying whole pages for your website is content theft and will be DCMA'd.
Tagged With: Cornmeal, Flat Breads