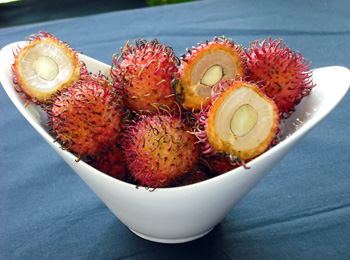 Rambutan fruit is related to lychee fruit. The flavour is somewhat sweet with a hint of tartness, somewhere between a lychee and a sweet grape.

A Rambutan is about the size of a golf ball, anywhere from 1 ⅓ to 3 inches (3 ⅓ to 7 ½ cm) wide, with thin fibrous skin. The skin colour can be various shades of red, orangey-red, yellow and red, orange and yellow, various shades of yellow, etc. That being said, you can’t really see the skin, anyway, because protruding out of it are soft little spines from ⅕ to ¾ inch (5 to 20 mm) long (variously referred to as fronds, hairs or flukes, but actually called “spinterns”) making it look like a sea urchin. The spines may be a different colour from the skin, and the tips of the spines can be a different colour from the spines themselves.

Inside, the flesh is translucent, occasionally with rose-hues. It can be crisp or soft. There is a narrow seed in the centre covered with tough, papery skin.

The Rambutan tree grows 50 to 80 feet (15 to 25 metres) tall, with a trunk up to 2 feet (60 cm) wide. It is evergreen, with leaves anywhere from 3 to 12 inches (7 ½ to 30 cm) long. The trees can be either male or female; only the female ones bear the fruit. They can be grown from seed (flattened side down) or cuttings. Growing from cuttings is important, if you want to end up with a good ratio of female trees that will bear fruit. From seed, less than half the trees come out female. The trees will bear fruit after 5 to 7 years of growth.

The fruit grows in clusters averaging 10 fruit that ripen in July and August. If the entire cluster is ripe, it can just be snipped off the branch. Otherwise, if picked one at a time, the fruit needs to be cut off with a piece of the stem, so as not to break the skin.

Rambutan is also being grown now in Hawaii, Guatemala and in Australia (North Queensland.) There are 50 growers in Australia as of 2003. In the 1970s, horticulturists in Australia did a lot of groundwork selecting varieties that would produce consistently good-tasting and good looking fruit.

There is also some cultivation in parts of South America such as Colombia and Ecuador, as well as in Costa Rica, Cuba, Honduras and Trinidad. The Rambutan sold in mainland America mostly come from Guatemala.

There are many different varieties of Rambutan. In some varieties, the flesh is more clingstone than others. Ten of the best varieties in south-east Asia have been Alindog, Bituin, Dalisay, Divata, Maharlika, Marikit, Marilag, Paraluman, Seematjan, and Seenjonja. Varieties being grown in Australia include Classic Red, Pink, Rongrien, R9 and Yellow. In China and India, a variety called “Seelengkeng” is popular because of its greater similarity to the lychee.

Choose fruit that is firm, with supple spines, and that is brightly coloured. The spines can easily be crushed if not properly packed. The spines may darken if bruised or slightly dehydrated, but the fruit inside is usually still fine.

Make a cut through the skin all the way around, then peel off the skin to eat or use.

When putting on fruit platters, you can leave half the skin on for look, for your guests to then peel off.

Don’t cut in half right through the seed, and don’t eat the seed.

You can eat Rambutan out of hand. It is sometimes stewed as a dessert, sometimes canned in syrup, and sometimes made into a preserve such as a jam.

Store at room temperature for 2 to 3 days, or in a plastic bag or air-tight container in the fridge for 5 to 7 days.

Rambutan is native to south-east Asia, particularly Malaysia and Sumatra. Introduced into the Philippines in 1912.

The first ones imported into Japan at the end of 2000 actually came from Australia.