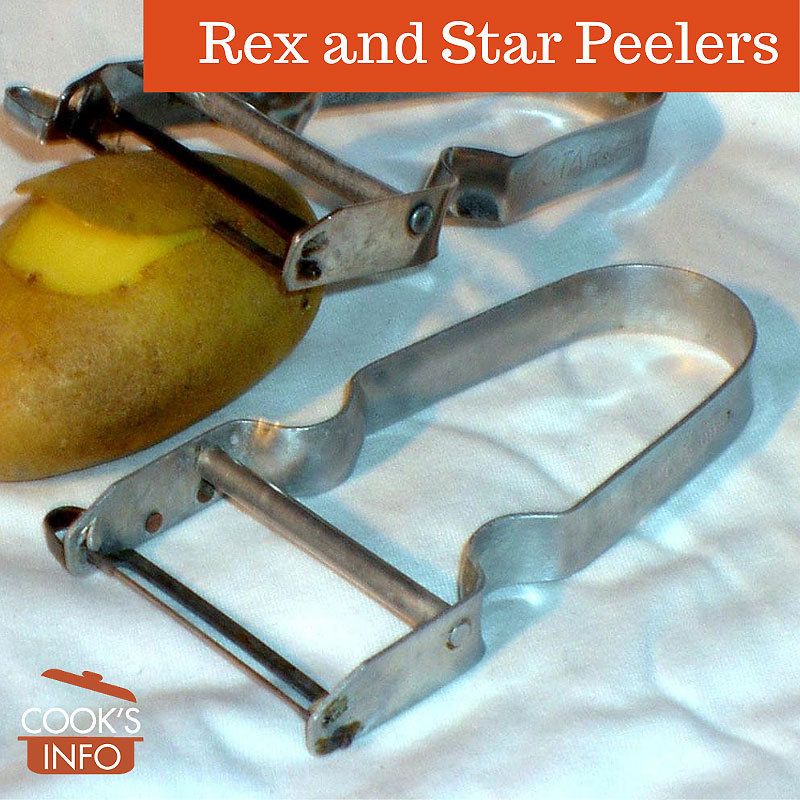 The Rex peeler is an aluminum vegetable peeler made in Affoltern am Albis, Switzerland by the Zena company since the mid 1930s. A similar version of it made in stainless steel is called “Star.”

The Zena company has since added a few different peelers to its lineup as well. In 1984, it introduced one with a plastic handle called the “Rapid Peeler”, and later, it introduced a Julienne Peeler, and a Serrated Peeler (“Tomi”, aka ” soft skin peeler”), both in stainless steel.

Rex is the original design of peeler made by the Zena company. The model number is Mod. 11002.

It is made of aluminum and carbon steel. The handle is a single piece of aluminum. The blade is hardened, blued carbon steel. A strip of the blade extends off to the side to form a potato eye remover on the side. There are six parts in total to it: “The basic Rex model has six parts.” [2] Brookes, Robert. Rex the peeler is king of the kitchen. Swiss Info. Swiss Broadcasting Corporation. 5 October 2006. Accessed August 2020 at https://www.swissinfo.ch/eng/rex-the-peeler-is-king-of-the-kitchen/5486616

Owing to aluminum being the primary material, it is very light. But again, owing to the aluminum, it is not dishwasher safe and needs to be handwashed.

A gold-plated model of the Rex was created in 1997 to celebrate the 50th anniversary of Rex.  [3] Brookes, Robert. Rex the peeler is king of the kitchen. As of 2020, it is still being offered, with production restricted to 1,000 annually.

At one point, the company also made limited editions of Rex in titanium, but only three of those were made. This model was called the “T-Rex”. 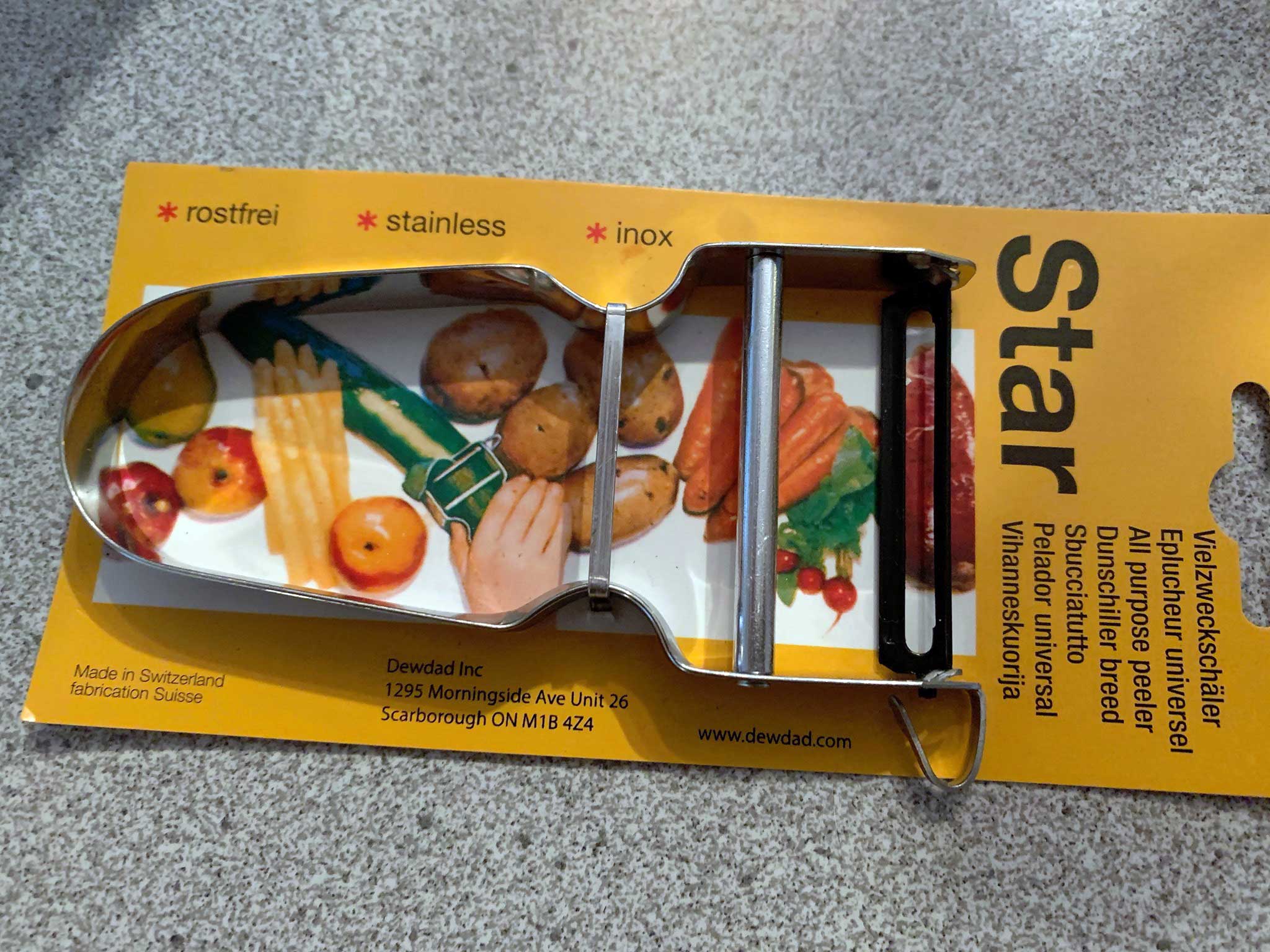 The Star peeler is an updated version of the Rex.

It is made entirely of stainless steel, both the handle and blade. The stainless steel blade is a bit less sharp than the carbon blade on the Rex model.

Owing to the use of stainless steel, it is slightly heavier in weight than the Rex. This also makes it, however, dishwasher safe. It has only three parts: “Star is made of stainless steel and has just three [parts].”  [4] Brookes, Robert. Rex the peeler is king of the kitchen.

Common features between the Rex and the Star 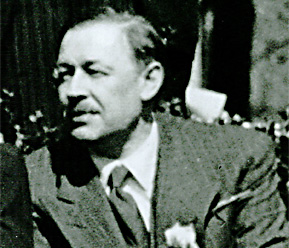 Alfred was born in Davos, Switzerland. His parents were Czech immigrants to Switzerland. [5]Vegetable peeler: Rex. E-Guide. Museum für Gestaltung. Zurich University of the Arts.Accessed August 2020 at https://www.eguide.ch/en/objekt/rex/ His family moved to Zurich when he was thirteen. [6]Rex Vegetable Peeler. Big Book UK

In 1935, he filed a German patent application for a vegetable slicer with an adjustable blade. [9]Vegetable peeler: Rex. E-Guide. Museum für Gestaltung.

In 1947, he received worldwide design protection for his peeler: “In 1947 he had the invention he called the “Rex” put under worldwide design protection as Mod. Int. 11002.”  [10]Vegetable peeler: Rex. E-Guide. Museum für Gestaltung. He used aluminum for its design. During World War Two, steel had become scarce, and aluminum become a popular alternative in Switzerland for kitchen implements. The Swiss could make their own aluminum, with the large aluminum plant of “Aluminium Industrie Aktien” in Neuhausen am Rheinfall. [11]Vegetable peeler: Rex. E-Guide. Museum für Gestaltung.

In 1958, Alfred’s son, Alfred Neweczerzal Junior, took over the firm. [12] ZENA, the company. Interesting facts about our company in brief. Accessed August 2020 at https://www.zena.swiss/en/world-of-zena/company

In 2009, the Rex peeler was included in a MOMA exhibition in Zurich. [15]Klün, Franziska. Der King der Küche.

In 2020, it is still a small company in Affoltern am Albis near Zurich with around 10 to 11 employees [16]11 as of 2010: ZENA, the company. Interesting facts about our company in brief. Accessed August 2020 at https://www.zena.swiss/en/world-of-zena/company  , but manufactures 2 million pieces a year.

Until the 1990s, demand outstripped supply, and the company didn’t even have to think about marketing, or offering new products.

This web site generates income from affiliated links and ads at no cost to you to fund continued research · Information on this site is Copyright © 2022· Feel free to cite correctly, but copying whole pages for your website is content theft and will be DCMA'd.
Tagged With: Peelers