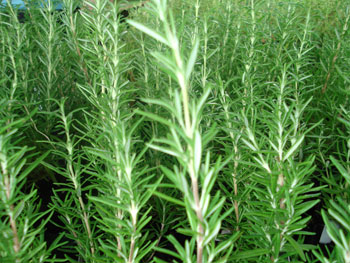 Rosemary is an herb native to the Mediterranean with small needle-like leaves. It is actually an evergreen shrub that can grow up to 7 feet / 2 metres high. Each spiky, needle-like leaf on it is about an inch (2.5 cm) long. The leaves have a very robust, savoury taste, and can be used dried or fresh, chopped, whole or ground.

If you live in a temperate climate where winter isn’t severe, you can grow Rosemary near your kitchen door and cut it year round. But if you don’t, don’t be put off by those toffs who sniff at using anything but the fresh: Rosemary is one of those herbs that dries extremely well. If they want fresh in February, give them a shovel so they can dig it out from under two feet of snow.

Put Rosemary in at the beginning of cooking, as it doesn’t lose its flavour during cooking as other herbs do. It is good with any roasted or fried veg, any meat really except beef, tomatoes, strong flavoured fish, and shellfish.

A great bbq sauce is chopped Rosemary (fresh or dried), olive oil, garlic and lemon juice. And while you’ve got the barbeque fired up, if you have any fresh Rosemary, pitch a few sprigs on your barbeque coals and your neighbours will go mad with hunger and desire.

Remove fresh sprigs from dishes after cooking. Dried Rosemary leaves won’t soften during cooking and can be a nuisance to have to fish out; you may wish to consider crushing or pulverising them to a powder before adding to dishes (it’s a wonder dried Rosemary isn’t also sold already ground.)

Romans used Rosemary mainly as a medicinal herb. The first hospitals used it to “purify” the air in them (based on the belief that illness could be carried by smells in the air.)

Later in the Roman Empire, including places such as Britain where the Romans introduced the plant into, it was used in cooking as well. The writer Apicius (late 4th or early 5th century AD) includes Rosemary in some of his recipes.

There are a zillion superstitions and traditions based on Rosemary, because it symbolized remembrance. Rosemary also represents fidelity and is often seen amongst bridal flowers and in wedding decorations.

“As for Rosmarine, I lett it runne all over my garden walls, not onlie because my bees love it, but because it is the herb sacred to remembrance, and, therefore, to friendship.” — Sir Thomas More

“For you there’s Rosemary and rue; these keep Seeming and savour all the winter long: Grace and remembrance be to you both.” — Perdita. The Winter’s Tale, IV, 4. Shakespeare.

There are many fanciful accounts of where the name Rosemary came from. One has it that a Rosemary bush sheltered the Virgin Mary on her flight from Egypt, and so is called the “rose of Mary”. The more likely origin is its Latin name, “rosmarinus”, meaning “dew of the sea”, as it first grew near coastal regions (“marinus” meaning sea).