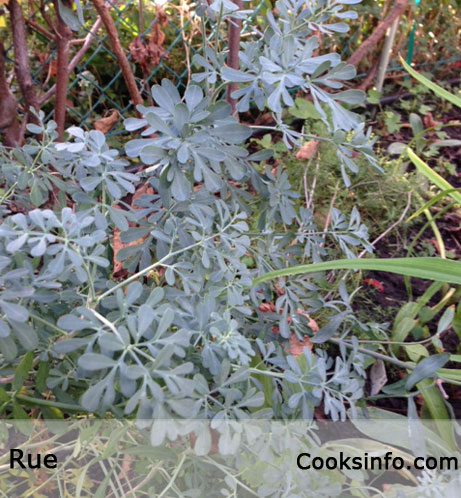 Rue is a small, evergreen shrub with woody stems and bluish-grey-green leaves. The leaves have an astringent or bitter taste, especially when dried. Some people are so allergic to rue (see Nutrition section below) that they even find the plant’s strong odour very unpleasant.

Rue was very popular in cooking up until a few hundred years ago, but it is no longer really used in modern Western recipes. It is still used a good deal in Ethiopian cooking.

An Italian “brandy”, “Candolini Grappa Ruta”, is made with rue, and even has a piece of rue leaf floating in the bottle. Some people find this grappa’s bitterness over the top, owing to the rue.

If you want the flavour with only a bit of the bitterness, steep the rue in a gently simmering liquid for a minute, then discard the leaves and use the liquid.

Rue can be nice used with sour, acidic foods, which help to tone down its bitterness — tomato sauces, dishes with olives or capers, etc.

In a salad, another bitter leaf such as chicory, dandelion, endive, rocket or sorrel. In cooking, a bitter herb or spice such as fenugreek seed.

Though early medicine attributed many virtues to rue, many people are actually quite allergic to it to the extent that even brushing it on their skin will irritate them like poison ivy.

Rue is one of the herbs mentioned in the New Testament. The Romans loved rue and introduced it into Britain. Apicius, the Roman cookery writer, uses it in many recipes.

“Here in this place I’ll set a bank of rue, sour herb of grace;

Rue, even for Ruth, shall shortly here be seen, in the remembrance of a weeping queen.”
— Gardener. Richard II. Act III, Scene IV. Shakespeare

Our word for the herb, rue, is not related to the English word “rue”, as in remorse (though you might regret the bitterness of a large mouthful of it.) The word comes instead from the Latin word, “ruta”. 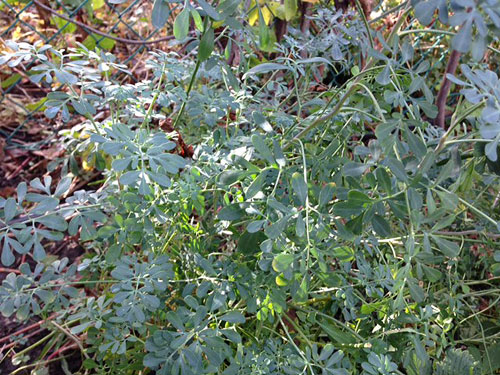