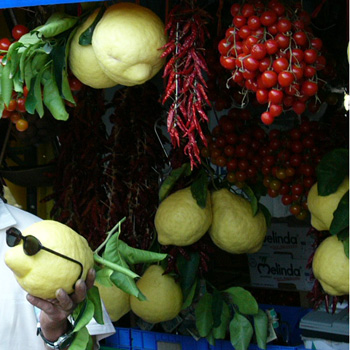 Sfusato Lemons are a variety of lemon grown in Italy on the Amalfi Coast. [1]

These lemons are very large, and have a nipple (usually more politely called a “point”) at the end.

The rind is a pale yellow. Inside, they are very tart and juicy with very few seeds. Overall, they have a pronounced lemon smell, and a good shelf life.

The tree will grow true to seed 70% of the time. Cuttings are being nurtured in California in the hopes of building up a fledgling production there.

The trees in Italy are grown on terraces under bowers with thin nets on them to keep off frost and hail, and to provide shade (straw mats used to be used for this purpose.) Organic fertilizer (e.g. manure) is used. 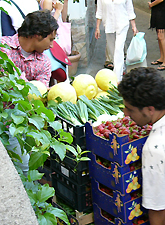 The lemons are harvested February to September inclusive. Prime harvest months within that period vary depending on which source you are consulting.

The lemons are classed based on what time during the harvest season they are harvested: mezzani, limoni bianchetti, verdelli, agostani, and bastardi.

[1] This starts on the south side of the Sorrentine Peninsula, which itself is about 45 minutes south of Naples.

The Romans grew lemons in the Amalfi Coast area. Some archaeologists think that this particular lemon, with its particular shape, is represented in frescoes (particularly in the House of the Orchard) at Pompeii, which would date the origin of the line back to Roman times.

The large lemon groves started sometime in the 11th century. From 1500 to 1800, the major buyers were navies and ship owners in northern European countries to combat against scurvy. 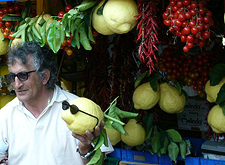 Most cooperative members are members of the Aceto family.

The Aceto family involvement started in 1825 with Salvatore Aceto in Ravello. Their export business had to be rebuilt after World War II.

Most competition comes from other lemon growers in Italy, in Sicily and Calabria.

As the family came to realize that they couldn’t compete selling their crops as generic lemons, they decided to brand them and apply for the European PGI.

Sfusato Lemons received their European PGI designation under the name of “Limone Costa d’Amalfi” on 4 July 2001.

“Sfusato” is a short-form of the Italian word for “pointed” or “tapered”, “affusolato.” The name refers to the pointed end of the lemon. Called “limon amalphitanus” in the Middle Ages.

This web site generates income from affiliated links and ads at no cost to you to fund continued research · Information on this site is Copyright © 2022· Feel free to cite correctly, but copying whole pages for your website is content theft and will be DCMA'd.
Tagged With: Protected Geographic Indication