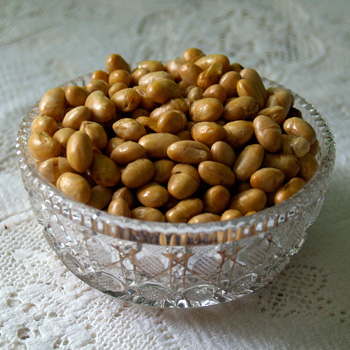 Soy Nuts are a snack food. They are crisp, baked soybeans.

They have a similar texture to peanuts and sometimes a similar appearance, but not a similar taste.

To make them, dried soybeans are soaked in water, then baked until brown.

Soy Nuts may be coated in a flavouring powder, or just salted, or covered in a coating such as chocolate or yoghurt.

They can be used in salads and snack mixes.

Soy Nuts are are not really a nut, of course — but then, neither is a peanut. Both are actually actually legumes.

Spread out in a single layer on an oiled baking sheet. Roast for 30 to 50 minutes, or until well browned at 350 F (190 C.) Let cool, and store in airtight container.

Some people who are dieting find them a good substitute for peanuts, which are higher in calories.