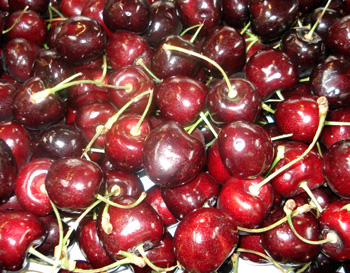 Sweet Cherry trees grow up to 36 feet (11 metres) tall, which is much taller than Sour Cherry trees. They also spread out almost as wide as they are tall.

The complicated planning required for pollination, plus the number of trees required, plus the huge size of each tree, is what makes them very uncommon in home gardens.

Sweet Cherries are larger than Sour Cherries. They are heart-shaped and firm. The skin can be yellowish, or dark red to dark reddish-purple. Popular North American varieties include Royal Ann, Bing, Lambert and Tartarian.

The trees have to be netted, or have bird scaring devices on them, because birds love these trees.

Sweet Cherry cultivars are divided into two groups. Mazzards are heart-shaped, softer fruits (Guigne in French, Gean in the UK.) The Bigaroon group (“Bigarreau” in France and the UK) are round, firm, crisp fruits.

Sweet Cherries can be eaten out of hand as a fresh dessert fruit, or be used in cooking.

The first attempt to introduce Sweet Cherries into North America didn’t work out. They were brought over with British colonists in 1629 and planted on the East Coast, but they died out. Sour Cherry trees were more hardy and were grown there instead. Sweet Cherries were reintroduced over on the West Coast by Spanish missionaries.

The Latin name “Prunus avium” can be broken down as follows in a way that any gardener will understand. “Prunus” meant cherry or plum (the Greeks and Romans kind of used the same word for both), and “avium” comes from “avis”, meaning birds. So, a fruit that you grow and that the birds eat.

Sweet Cherries are also called “Dessert Cherries”, meaning that they can be eaten fresh out of hand. But given that Sour Cherries can be cooked up in a baked good for dessert, this terminology can be unhelpful.