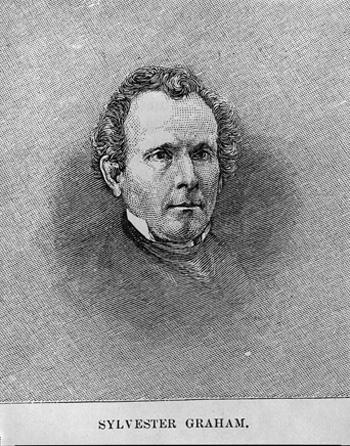 He was born in West Suffield, Connecticut, 1 of 17 children. His father John Graham, Jr (1722 to 1796) was a minister. In 1823, at the age of 29, Sylvester started attending Amherst Academy, but he was expelled the same year, accused of assaulting a woman. The charge is now thought to have probably been false, but apparently he was quite arrogant and he had annoyed a great deal of people at the school.

In 1826, aged 32, Sylvester was ordained a Presbyterian minister, and by 1830 at age of 36 he gave up trying to become a minister and started to develop other interests.

He felt that food, health and morality were very closely linked. He believed sexual desires caused disease. By 1835, he had become a popular lecturer on the topics. He advised people to exclude from their diets alcohol, cider (which would have been hard cider in those days), coffee, tea, meat, salt, tobacco and any food between meals. In their place, people were advised to eat as many raw fruits and veggies as they could. (Gee, sounds like a lot of killjoys in our own day — plus ça change….). When they were thirsty, they should drink nothing but water.

He developed a mass of followers, who called his diet and lifestyle advice “The Graham System”. They followed his rules to only eat 3 meals a day, exactly 6 hours apart, not to overwork, and only to wear loose clothing. His followers opened the first “health food store” in America, as well as restaurants and hotels and started some newspapers to spread the word.

He published the Graham Journal of Health and Longevity, and set up hotels in Connecticut that served vegetarian meals and unseasoned foods. He felt that food seasonings encouraged alcohol consumption. He started calling himself a doctor, even though he wasn’t.

To many, his views were quite radical. At the time, people didn’t think that vegetables and fruit were particularly nutritious. Beyond that, he was obviously not very popular with people selling a lot of the products he forbid, nor with people actually in medicine. Angry mobs would often besiege the places where he was supposed to speak.

By 1851, he was being called “Dr Bran” and the “philosopher of sawdust pudding”, and he was accused of hypocritically eating a lot of meat. He died in 1851 at the age of 58, so infirm and unwell that people saw him being carried around town in a wheelbarrow.

His home in Northampton, Connecticut is now (2004) a restaurant called Sylvester’s.