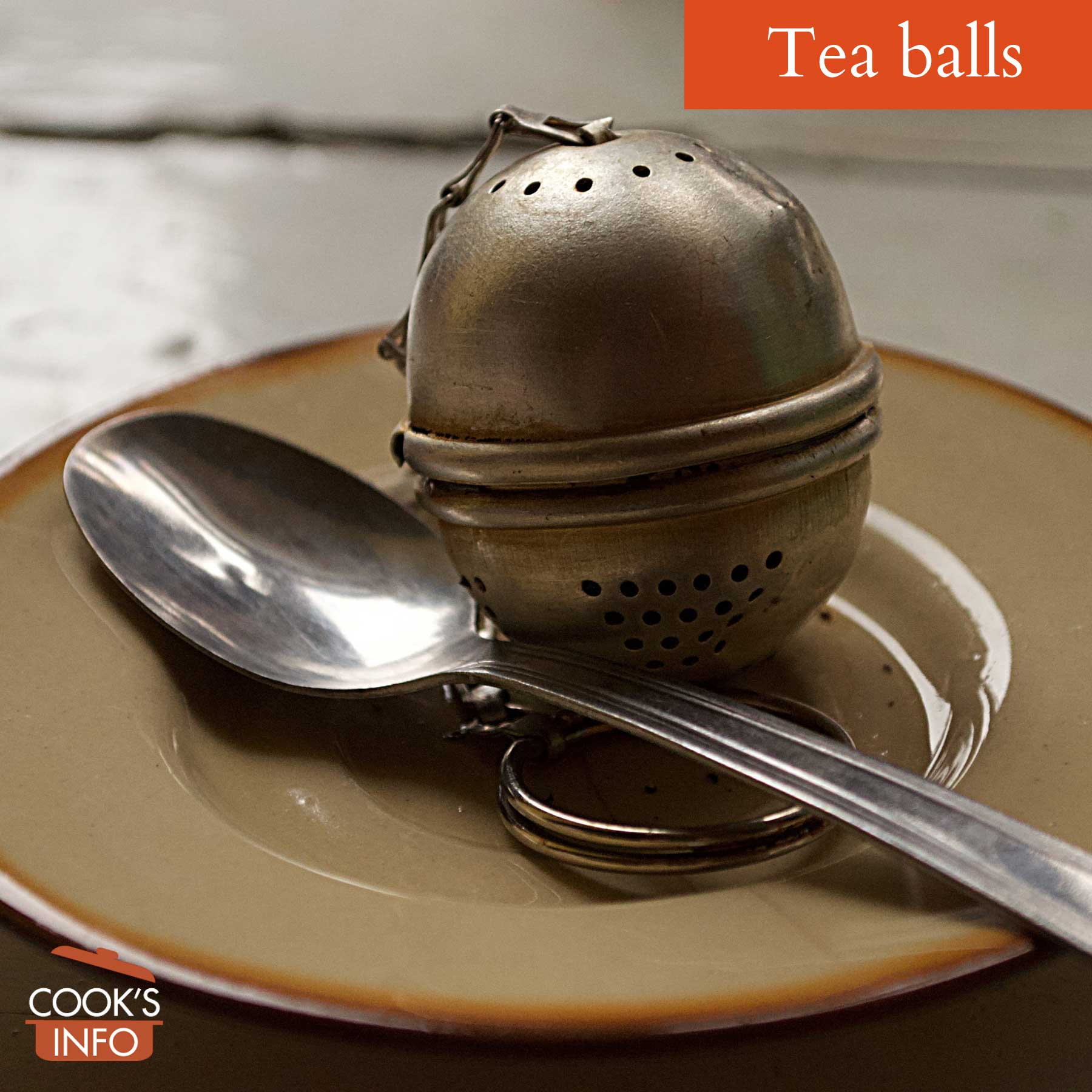 A tea ball is a small mesh or perforated enclosure designed to hold loose tea leaves while they are being steeped in hot water. The purpose is to provide a way to remove tea leaves all at once quickly and easily from brewed tea when the leaves are deemed to have infused the hot water sufficiently. This is not only convenient for the user, but also helps to prevent the tea leaves from over steeping and making the tea bitter or acrid.

The enclosure of a tea ball can be made of metal or plastic. The most common seem to be egg-shaped balls usually made out of stainless steel. These balls come apart into two halves that screw together.

Most tea balls have matching small shallow saucers that you are supposed to rest them in afterwards, for example at a table. Often, though, tea gets made in the kitchen so the used tea ball just gets chucked in the sink instead, and the stand eventually gets lost and forgotten.

Tea balls come in a zillion different sizes and variations. You can get small ones to make a single cup of tea to ones large enough to hold enough tea for a pot.

Some specialty ones are shaped like teapots, including a decorative handle, though these are only big enough to hold tea for a single cup.

You can also get tea balls that are spoon shaped; the bowl of the spoon is what holds the tea, then you can stir it around in your cup with the handle attached. 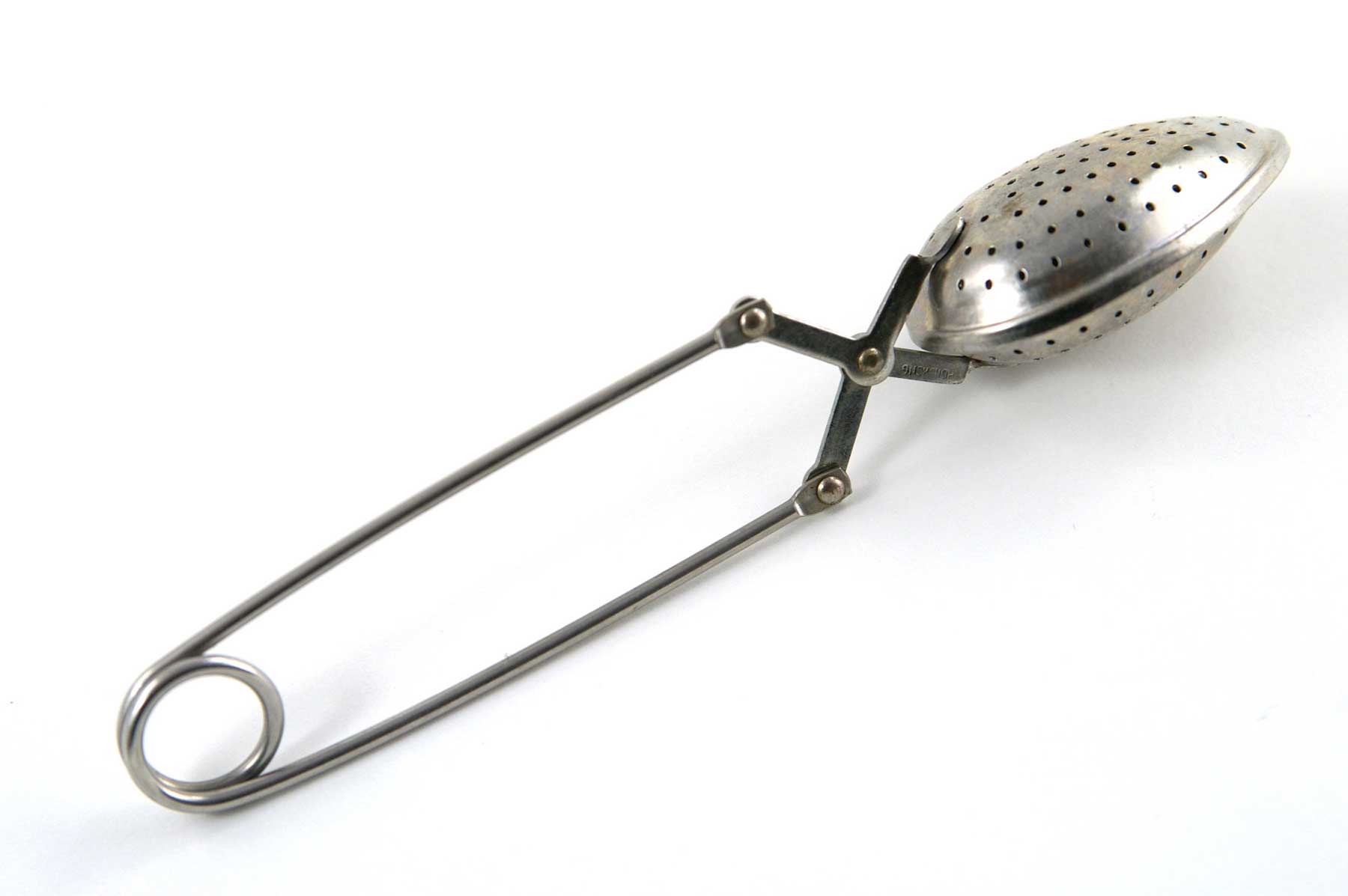 Tea balls are not really needed in tea pots. In fact, many feel that tea in pots is better made with the tea leaves left loose, allowed to swirl around. As tea leaves settle to the bottom of the pot this is really only a problem if the “exit” hole for the tea in the pot is at or near the bottom, in which case you can just pour the tea out through a tea strainer. Some people who do use large tea balls for pots say they do so because it makes clean-up easier. They can ensure that most of the leaves end up in the compost instead of going down the drain. People who have septic tanks or have finicky drains particularly appreciate not having loose leaves floating around during clean-up.

If you’re tempted to buy a really large tea ball for your favourite tea pot, make sure the ball will be able to fit into the hole at the top of the pot. 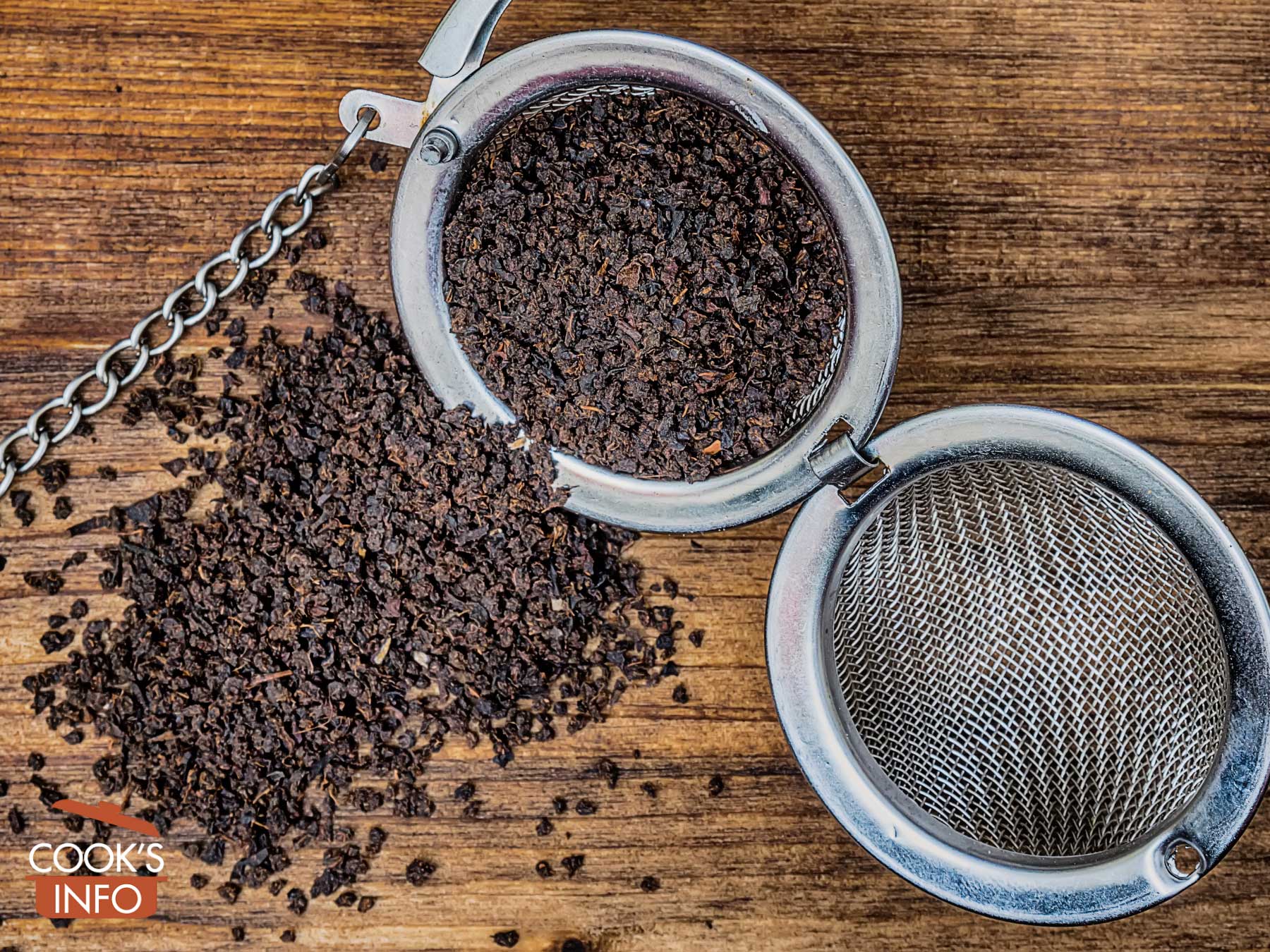 Put the tea ball in the cup or pot first, then pour boiling water over it. Don’t pack a tea ball full; leave lots of room inside the ball for water to circulate through the leaves.

You can also use a tea ball as you would a sachet bag, for holding herbs, etc. together in a soup or sauce, or spices for mulled wine.

Cut a square of cheesecloth, put the necessary amount of loose tea into the centre of the square, and tie it up with string or thread.

Or, make loose tea in a pot.

Tea balls first appeared in the early 1840s in the UK. Some would be very ornate, and would be made of silver. These fetch very high prices today amongst collectors.

“‘Tea balls’ and ‘tea eggs’ were just some of the labels applied to tea infusers during the nineteenth century. Filled with loose tea and immersed in a cup or pot of hot water, tea infusers could be very elaborate, crafted in silver with filigree patterns.” [1]Kay, Emma. Vintage Kitchenalia. Gloucestershire, England: Amberley Publishing. 2017. Google Ebook edition.

Stick infusers were also made of silver. They were a slender silver rod with a small ball or canister at the end of it; you use a stick infuser for a single cup of tea.

This web site generates income from affiliated links and ads at no cost to you to fund continued research · Information on this site is Copyright © 2022· Feel free to cite correctly, but copying whole pages for your website is content theft and will be DCMA'd.
Tagged With: Strainers and Sieves, Tea, Tea Trappings