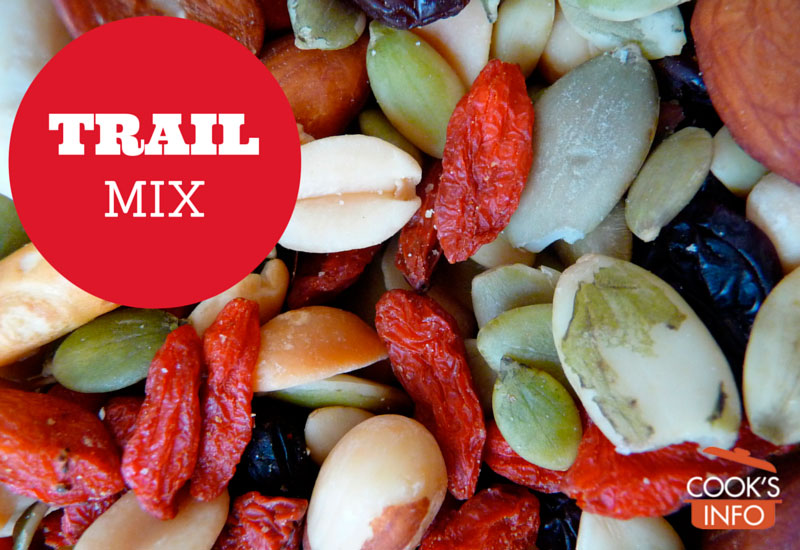 Trail Mix is a generic name for a dried snack mix, meant to be eaten out of hand.

There is no one version of Trail Mix; no one single recipe.

The idea behind it is that it is a healthy, high energy snack to have while hiking. Most Trail Mix these days, the only trail it sees is from kitchen to couch, and how healthy it is depends on the ingredients.

If it’s actually being used for a snack while hiking, chocolate is not always practical as it can melt in heat. Thus, the chocolate used is often a coated chocolate candy such as M&M’s. 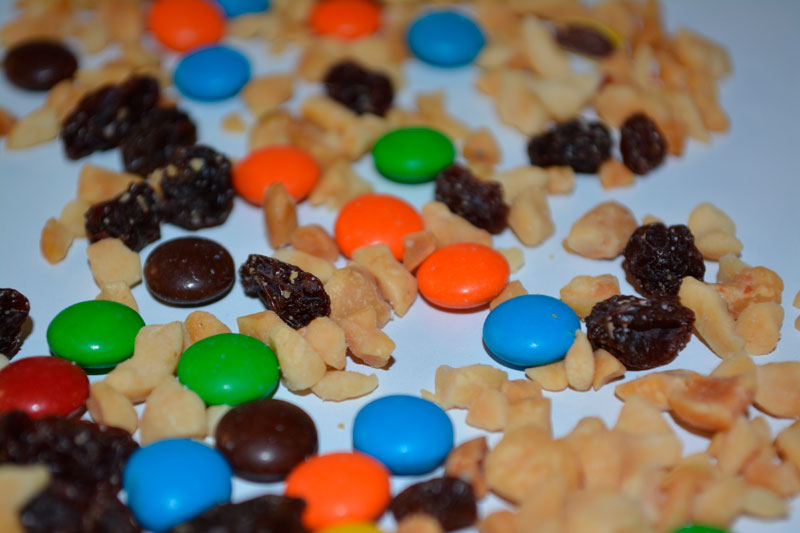 You can get expensive gourmet Trail Mixes.

Trail Mix is also called “gorp”, which some thinks stands for “good old raisins and peanuts”, or “Granola Oats Raisins and Peanuts.”

It is called “scroggin” in Australia and New Zealand. Some think scroggin is an acronym having the first letter from each of the following ingredients: sultanas, chocolate, raisins, orange peel, ginger, glucose (sugar), imagination (imagination being a stand-in wild card for whatever other ingredient the cook wants to add), and nuts.

Explanations for both terms, “gorp” and “scroggin”, are usually classed by most food historians as “backronyms”: explanation of an word or acronym, invented by someone long after the fact.

Trail Mix can be used as a topping for desserts such as bowls of fruit or ice cream, or as an ingredient in some dessert recipes. 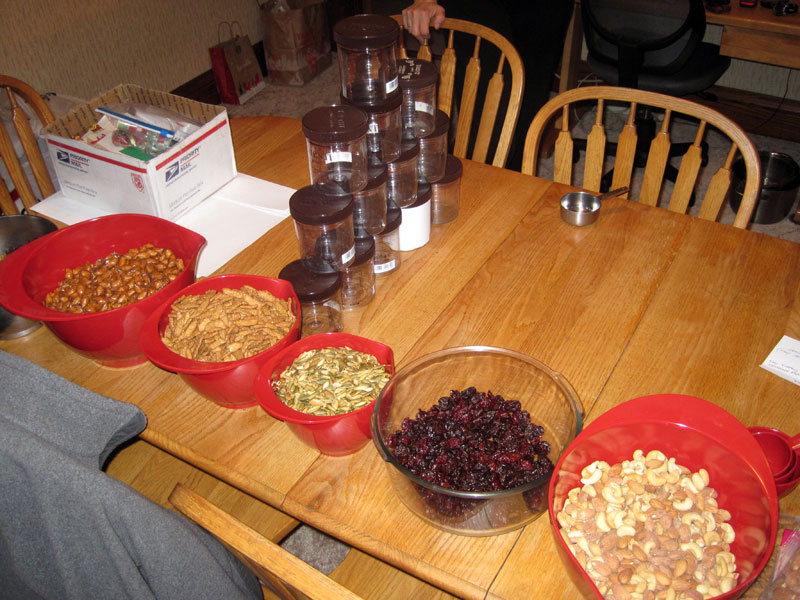 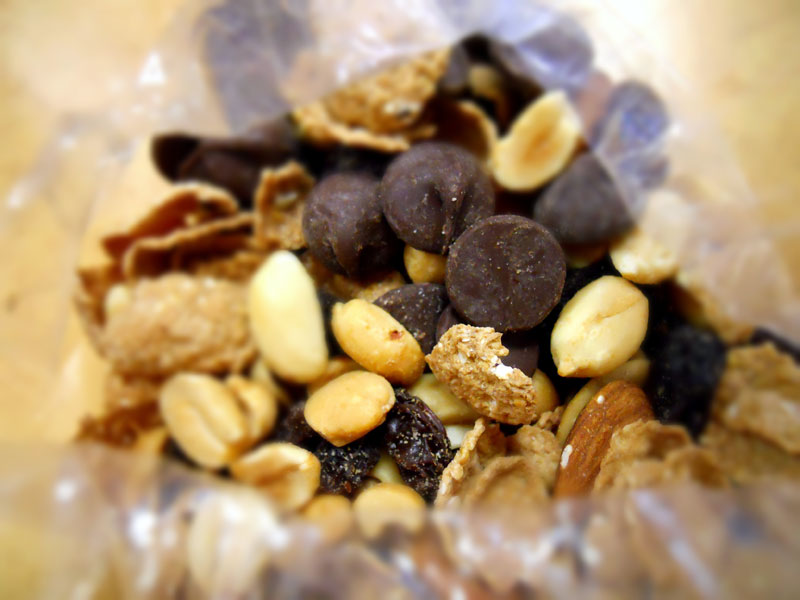 Trail Mix in one form or another has really probably been around for ever: mixtures of berries and nuts were carried by travellers since time immemorial.

At the time of its formal appearance as a defined food item in the late 1960s, home-made party snack mixes were still popular.

“Sunday morning the Huff and Puffers, as they call themselves, will see Chicago’s front yard, cycling along Lake Michigan by way of the lake-front park system bike paths. Sunday afternoon to avoid cycling in heavy traffic, a bus will take the group to Rockton, Ill., 90 miles from Chicago. The trip begins there and soars northwest to La Crescent, Minn., then south along the Mississippi and east to the shores of Lake Michigan at Kenosa, Wis., 45 miles north of Chicago. The enthusiasm of Dave and Kathy is contagious. One is caught in a whirl of gear ratio, mileage, suitable clothing and “gorp”. Gorp is a delicious mixture of salted peanuts, raisins, chocolate drops, marshmallows and candies which experienced riders carry. They munch on it to keep up strength and the spillage provides a ribbon of friendly garbage marking the trail. The slogan is “Go gorp and you’ll always get there”. [3]Frederick, Virginia. Salina Couple to Pedal Through 2-Week Vacation. Salina, Kansas: Salina Journal. 1 October 1965. Page 10.

“Margie Mahoney, 23, of Anchorage, Alaska is a member of the Ladies’ Crosscountry Team and makes her own snack food. When in competition she prefers large breakfasts and after a race she drinks hot liquids, eats raisins and oranges. At home she makes granola for breakfast. Her Skiers’ Trail Mix for hiking or ski touring is made from equal amounts of raisins, dry roasted peanuts, chocolate chips or M&M’s. “I mix these in a plastic bag and throw it in my back pack. It’s a great energy snack.” [4]Claire, Aileen. Indiana, Pennsylvania: Indiana Evening Gazette. 12 February 1976. Page 15. 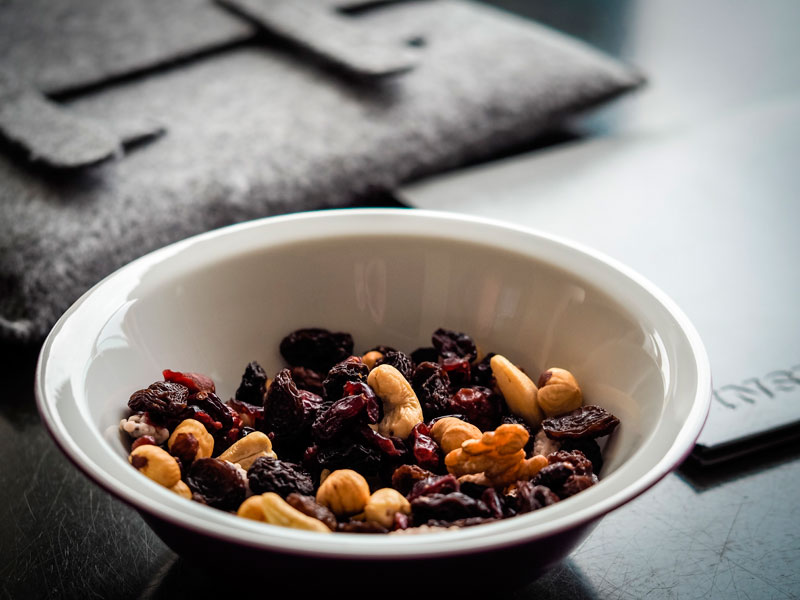