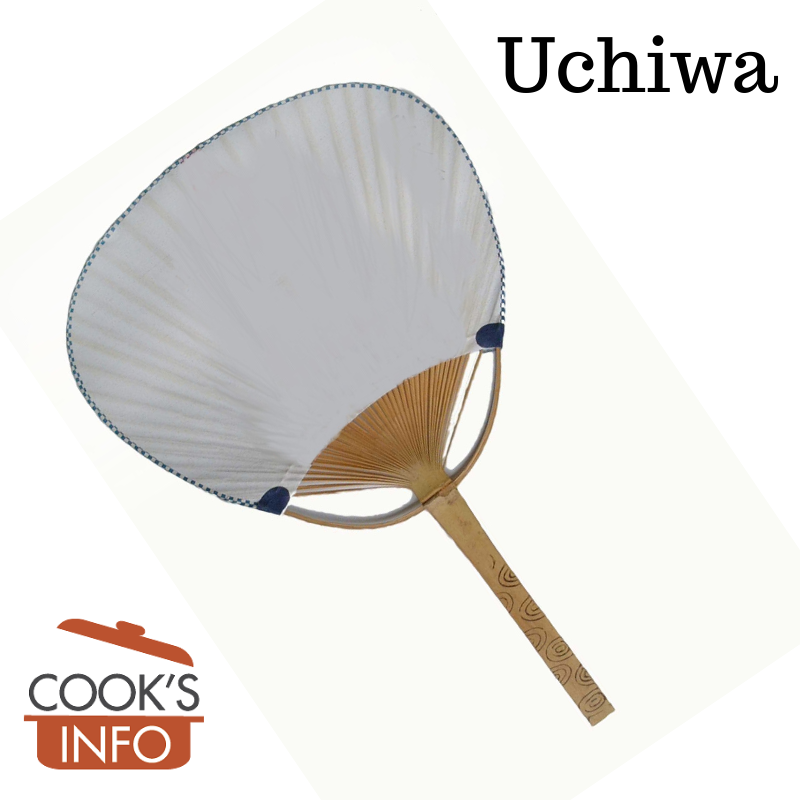 An uchiwa is round paddle-shaped paper fan used in Japan for fanning rice to be used for sushi. It can be made of paper spread out over a solid frame, or it can be a folding fan, or even a regular paper fan not dedicated to kitchen use.

Many food writers say that the purpose of fanning the rice is to cool it.

However, putting the rice in the fridge would accomplish the same thing, effortlessly.

The authors of the “Sushi University” blog state that the purpose of the fanning is not to cool the rice, but rather, to ensure that the seasoning vinegar which is added to the hot rice right after it is cooked evaporates speedily:

Fan the rice using a uchiwa (fan) to remove the moisture of vinegar and mix the rice with a cutting motion horizontally this time. Fanning with uchiwa is not to cool down the rice (do not put the rice in the fridge to cool it down), but to dry up the excess moisture of vinegar. [2]”The real way of making vinegared rice by a sushi master. There are 4 tips!” Accessed November 2019 at https://sushiuniversity.jp/sushiblog/tag/vinegared-rice/”

The speedy evaporation of the seasoning vinegar leaves a lustre behind on the rice and helps prevent the vinegar-moistened rice from clumping.

There is no set rule about how long to fan the rice for: some say fan for 5 minutes, some say 10 to 15 minutes. Most writers seem to advise to fan while mixing the rice; a few say that fanning after mixing is fine.

Some people will even use a handheld battery-powered fan, or or an electric fan set nearby on low.

Any fan, electric or manual.

This web site generates income from affiliated links and ads at no cost to you to fund continued research · Information on this site is Copyright © 2023· Feel free to cite correctly, but copying whole pages for your website is content theft and will be DCMA'd.
Tagged With: Cooking Tools, Japanese Food