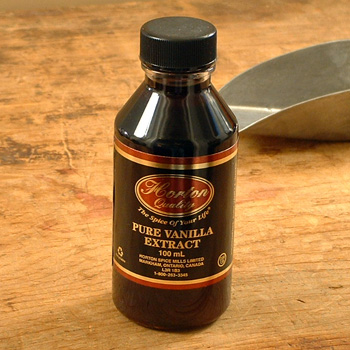 The first artificial Vanilla Extract was developed in Germany in the 1880s. It was developed using coumarin (now banned owing to the toxic effect it has on our livers); and is now made from synthetic vanillin derived from various other sources.

Artificial Vanilla Extract was developed as a cheaper alternative to the real thing, so that ordinary people could enjoy the taste, too. It doesn’t have the full, complex range of tastes that the real thing will have, but entire generations have grown up in budget-wise households where it was used, and actually prefer the taste. Artificial Vanilla Extract has a far lower alcohol content, about 2%.

Foodies and purists will tell you that you have to use the real Vanilla Extract or, or…. they never actually say what will happen if you don’t. Buy what you can afford, and if you buy the artificial so that with the money you save you can put something else on the table, more power to you.

The density of vanilla extract is ≈ 0.88 grams per mL.

Vanilla powder (use half as much as the extract called for), or try another extract such as almond, rum, etc. The flavour won’t be the same, but you’ll still get a nice flavour.

Many writers will advise you to not buy vanilla extract, real or imitation, that has been bottled in the Caribbean and in Mexico. These products used to contain something called “coumarin” to enhance the flavour; but coumarin has been banned as a toxic substance in the US since 1954. You may have heard of a derivative from coumarin — it’s called warfarin, and is used to kill rats.

Usage of coumarin by most manufacturers in these countries appears to have stopped, but with their labelling laws being non-existent or unenforced, some writers say the labels perhaps can’t be trusted. Even those manufacturers who have stopped using coumarin may still be using red dyes banned in the US, Canada and the UK. Consequently, they advise to make sure your vanilla is bottled by an American, Canadian or UK manufacturer, who will have to adhere to safety and labelling laws.

Store extract in a cool dark place — which is to say, not on an open shelf, and not near the stove. Don’t refrigerate. It will keep for several years.

The first liquid Vanilla extract commercially produced and sold in the U.S was created in 1847 by Joseph Burnett (1820 – 1894), who reached greater fame through his production of Deerfoot Sausage.

Artificial Vanilla Extract is sometimes referred to as “Vanilla Essence”.

This web site generates income from affiliated links and ads at no cost to you to fund continued research · Information on this site is Copyright © 2023· Feel free to cite correctly, but copying whole pages for your website is content theft and will be DCMA'd.
Tagged With: Extracts