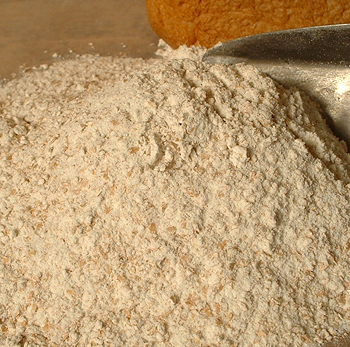 Whole Wheat Flour is wheat flour that contains all the wheat kernel except the husk. Because it contains the bran and the germ, it has a slightly nutty flavour.

Whole Wheat Flour is lower by weight in gluten than white flour, because the proportion of the weight that is gluten is diminished by the presence of the bran and the germ. Further, as the gluten structure develops in a dough made with whole wheat, it is “undermined” by the bran and germ which cut through it. Still, it will make a relatively full loaf of bread compared to non-wheat flours.

While it is true that whole-wheat contains more nutritious elements than unenriched white flour (more protein, minerals and vitamins), this is not true when compared to enriched white flour. Further, some of these elements in Whole Wheat Flour get caught up in its roughage and pass out of our bodies before we can process them. For people on marginal diets, this can be bad news: they might have been better off on enriched white flour because its nutrients are easier to absorb.

So despite the growing preference of people to have dark breads, these breads may not necessarily be more nutritious, all the time, in all circumstances for everyone. It isn’t that simple and can depend on what else is in your diet.

Iron and zinc problems have been studied amongst poor people in Egypt and Iran eating whole grain breads; and Dublin children on whole grain breads developed rickets during WWII. (The British government fortified British 85% wholewheat flour with calcium carbonate to avoid this problem. [1] [2] )

White flour, mixed with some other flour

Store in refrigerator or very cool basement unless you use it up frequently.

[1] “After these experiments calcium carbonate was added to the National Loaf, and justification for the step came sooner than might have been expected. The shortage of wheat in Ireland during the war forced the Government to introduce whole wheat flour [Ed: because it gave a greater yield.] It was not enriched with calcium and this step was followed by a considerable increase in the incidence of rickets in Dublin (Pringle, Reynolds & Jessop, 1943.) Other things may have contributed to this increase but on the whole the evidence that it was a matter of cause and effect is strong.” McCance, R.A. and Widdowson, E.M. Department of Experimental Medicine, University of Cambridge. British Journal of Nutrition, 2(4): 401-403. 1949.

[2] “At each nursery half the children received for five months National bread, made from 85 per cent extraction flour, and the other half the same bread fortified with 7 mgm. iron (reckoned as Fe) per ounce, which provided the children with far more iron than they could have obtained from natural sources. The average daily intake of bread by children aged one to five years was about 2 to 3 ounces, providing about 14 to 20 mgm. of additional iron. This medicated bread was without effect on the haemoglobin level or the morbidity rate. It is suggested that the phytic acid of 85 per cent. extraction flour interfered with the utilization of the added iron. National bread made from 85 per cent extraction flour was itself without effect on the haemoglobin level over a period of five months. Iron cooking utensils were in use at one nursery but did not make an appreciable difference to the mean iron intake of the children as the consumption of cooked fruit was small….. This investigation supports the view that 85 per cent extraction flour is not a good vehicle for increasing iron consumption.” — Mackay, Helen M.M., Dobbs, R.H., Bingham, Kaitilin. The Effect of National Bread, of Iron Medicated Bread, and of Iron Cooking Utensils on the Haemoglobin Level of Children in War-Time Day Nurseries. London: Archives of Disease in Childhood. 1945 June; 20(102): pp. 56–63.

This web site generates income from affiliated links and ads at no cost to you to fund continued research · Information on this site is Copyright © 2023· Feel free to cite correctly, but copying whole pages for your website is content theft and will be DCMA'd.
Tagged With: Wheat Flour