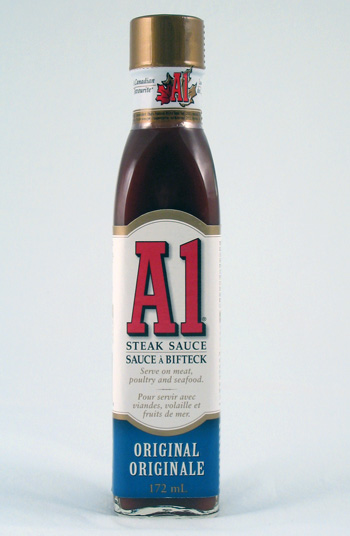 A.1. Steak Sauce is a brown sauce that is runnier and fruitier than other brown sauces The ingredients include orange peel and raisins.

A.1. sauce is now no longer generally available in Britain, except at specialty shops that carry American foods, at prices that would make North American eyes pop — around £4.50 – £7.00 a bottle (2004 prices.) In fact, many Brits who have heard of it assume it’s an American sauce, and don’t know that it actually originated in the UK. From time to time, in some parts of the country, it has been available at Tesco’s and Sainsbury’s; spotters of it on UK grocery shelves breathlessly report sightings, as though they had just seen a Great Bustard racing through Leicester Square.

In America, it is produced by Kraft and spelt “A.1.”, with periods. In Canada, where it has been distributed through Intercorp since 1999, it is spelt “A1”, with no periods.

A.1. Steak Sauce was created sometime before 1831 by Henderson William Brand, who was a cook for King George IV. He may have first made or come across the sauce while in the King’s employ, but it’s highly doubtful that the King tasted it and pronounced it “A1”, as he is reputed to have said.

In 1831, Brand struck out on his own to make the sauce, founding a company called Brand & Co. In 1850, the business was bought by W.H. Withall, but continued to trade under the Brand name. The sauce was exhibited at the International Exposition in London in 1862. In 1873, Brand & Co. was bought by Dence and Mason. It was introduced into America in 1895; into Canada in 1931.