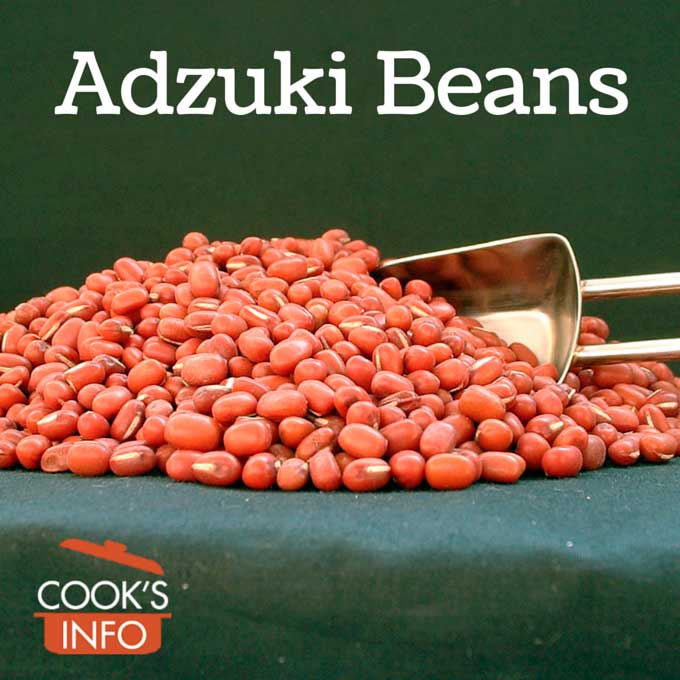 The Adzuki Bean plant grows 30 to 60 cm (1 to 2 feet) tall, and blossoms with yellow flowers. It is not frost hardy.

It is about 4 months from planting to harvest of the beans for drying.

When its bean pods are very young, they can be harvested for use as you would snow peas or green beans. They won’t really have any beans in them at this point.

The pods grow up to 12 ½ cm (5 inches) long, are only about ⅛ inch (3 mm) thick, and mature from green and yellowish to brown. When fully mature, the pods will split open if allowed to dry out too much before harvesting. They don’t all mature at the same time.

The beans inside the pods are small, only about 5 mm wide, but still 2 to 3 times larger than mung beans. They are roundish with a point at one end.

Adzuki Beans have skin which is dark red-reddish brown, with a white ridge on the side.

Adzuki Beans are the second most important bean in Japan after soy.

Varieties that grow erect are grown in Japan, while trailing varieties are grown in China and in more southerly parts of Asia.

Not all varieties are red; in fact some are white,

Adzuki Beans are used widely in Japanese cooking. The Japanese consider a redder colour more desirable than a maroon or darker red colour. Nearly all Adzuki Beans in Japan are grown on Hokkaido island, and most of Adzuki grown there are of the Erimo variety.

Adzuki Beans have more sugar than most beans, so they are also used in desserts and sweets — 80% of all Adzuki Beans grown in Japan are used for the Japanese sweets called “wagashi”, and in desserts such as Yokan. The paste made from them is called “Anko.”

Some people who soak them first say that an hour of soaking is all they need.

When cooked with rice, Adzuki Beans will make the rice pink.

Adzuki Beans are a bean cultivar created by man; they are not found in the wild. They were probably developed in China. They were introduced into Japan around 1000 AD.

The Bloodwood variety was developed from the Hikari variety by the New South Wales Department of Agriculture in Australia in the 1970s, and released in 1980.