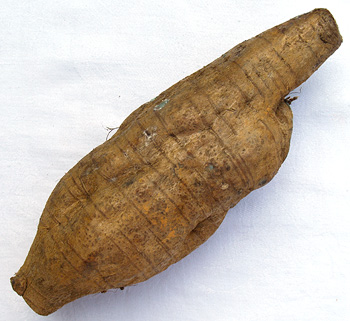 Arrowroot is a tropical root vegetable. It can be used fresh as is as a vegetable, or it can be dried into a white starch powder for use as a thickener in cooking.

The root comes from a tropical plant called “Maranta.” The root, about 25 cm long, and 13 cm in diameter (10 inches x 5 inches), is white inside and covered with a thin, light-brown skin. The part of the plant that grows above ground may grow to 180 cm (6 feet) tall, and produce cream-coloured flowers. It is cultivated in Australia, Bermuda, Brazil, the Caribbean, southern China, South Africa and south east Asia.

You can find fresh arrowroot in Chinese markets for use as a vegetable in cooking.

Its most usual use in Western cooking, though, is as a dried starch sold as a white powder.

The starch is extracted from young roots under a year old. The extraction process involves washing the roots, pounding them to a pulp, stirring the pulp in water and passing the milky liquid through a sieve. The liquid is allowed to settle, then is drained away leaving just the sediment. The sediment is then washed and drained again, and this time the sediment is allowed to dry into the powder which we know as arrowroot starch. The starch squeaks slightly when rubbed.

Like other root starches (such as tapioca), the starch is tasteless, odourless, and thickens more efficiently than starches that come from seeds (such as flours) or other sources. In fact, arrowroot has twice the thickening power of wheat flour. With less needed to do the same thickening job, arrowroot dilutes the taste of sauces less for fewer calories — and even that “less” has less taste of its own. Arrowroot thickens more rapidly than many other thickeners because its starch gelatinizes at a lower temperature — it doesn’t need to be boiled to thicken. This would make it ideal for use in dishes that can’t stand up to high heat, such as egg-based concoctions.

Arrowroot, like cornstarch, produces clearer sauces — sauces that aren’t as cloudy as when flour is used.

Escoffier, the grand master of French sauces, thought that one day such root thickeners and purer starches would replace wheat flour in French sauces, but the preference for flour, despite its being harder to work with, taking longer, and having a taste of its own, remains.

Some boxes of what says “arrowroot starch” may not be in fact not pure, but contain banana, rice, potatoes and other starch.

Never add Arrowroot powder straight to what you are cooking. Dissolve 1 teaspoon of arrowroot powder in 4 tablespoons (2 oz / 60 ml) of cold liquid — usually water, but it doesn’t have to be, it can be a juice, depending on what you are making. Mix it well to ensure it’s all dissolved. Then add to the mixture you want to thicken. 1 tablespoon will render 250 ml (1 cup / 8 oz) of liquid medium-thick.

Arrowroot’s clearness makes it useful for a meat glaze, where the clearness is wanted. In meat gravies, however, its use might raise eyebrows, as people rather expect their gravy to have a certain solid, murky look.

Arrowroot is a good thickener for fruit sauces, puddings, custards, etc. Mixed with a bit of cold water or cold juice, it can make a great glaze over top an open-faced fruit pie.

Add it towards the end of cooking because it sets fast, and once it’s set, if it is cooked much beyond that, it’s thickening power will break back down.

For this reason, some cooks feel that it shouldn’t be used inside fruit pies, as it thickens long before the fruit has really started to cook.

Fresh arrowroot can be cooked as you would water-chestnuts. Wash, peel and slice thinly. 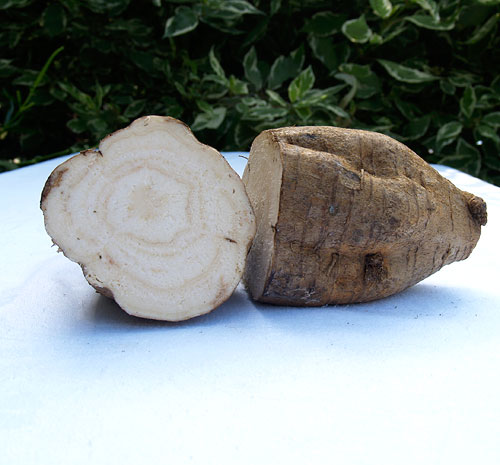 If you have fresh Arrowroot, refrigerate for up to two weeks.

Arrowroot powder will store indefinitely in a cool, dry place.

The name “Arrowroot” may be a corruption of “aru-root”, as it was called by some Indians in South America. The English name may have been reinforced by the native belief that the root was an antidote to arrow poison (as well as scorpion bits and gangrene.)