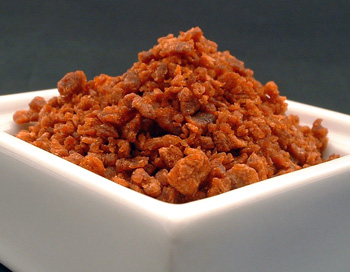 Bacon Bits are made from cooked bacon that has been dried, treated with preservatives and crumbled up into little bits. You can make them at home (without the preservatives), or buy them made for you. They are used as a condiment for incorporating into dishes and garnishing.

With the advent of imitation Bacon Bits, which soon became ubiquitous, Bacon Bits acquired a bad rap. The industry’s preferred phrase for them now is “bacon topping”, perhaps to get away from the whiff of “trailer park” that had attached itself to the older name.

It’s a myth that all store-bought ones are artificial. In fact, you can buy real ones. The downside to real ones is that they are more expensive, have a shorter shelf life, and have to be kept refrigerated — and they don’t come certified Kosher or vegetarian, as some of the imitation ones do.

Imitation Bacon Bits are made from TVP (“textured vegetable protein”, which means soy) that has been flavoured and coloured. Most have liquid smoke added to them as well. They are what is called an “analog food”, just like veggie mince. Most are very low fat and low cholesterol.

You can also buy something in between: “real Bacon Bits” which are processed meat with some TVP mixed in, to make a mid-price item.

You can also make your own (see Cooking Tips below.)

Making your own isn’t much cheaper, though, than buying the artificial ones, and it does have the downside in spur of the moment cooking of having to rely on there being bacon in the fridge or freezer. I can certainly see the convenience of always having a bottle of them to hand, and I know there are a growing number of people who actually love the artificial ones — not that they’ll admit it. It’s okay now to tell all your friends that you see a therapist or psychiatrist weekly, but woe betide you if they spot a bottle of Bacon Bits in your cupboard.

If you are cooking vegetarian or Kosher, you’ll want to use the imitation ones.

To make your own, zap streaky or American style bacon in the microwave for a few minutes until crisp, let cool and stiffen for a minute or two, then crumble them up with your hands. Then scrub your hands well to get all the grease off.

You can also make up a whole bunch at once, and freeze them in a freezer bag for ready-use a handful at a time.

Imitation Bacon Bits can be stored at room temperature; real ones must be refrigerated.

Bacon Bits have become a part of the national identity of Quebec.