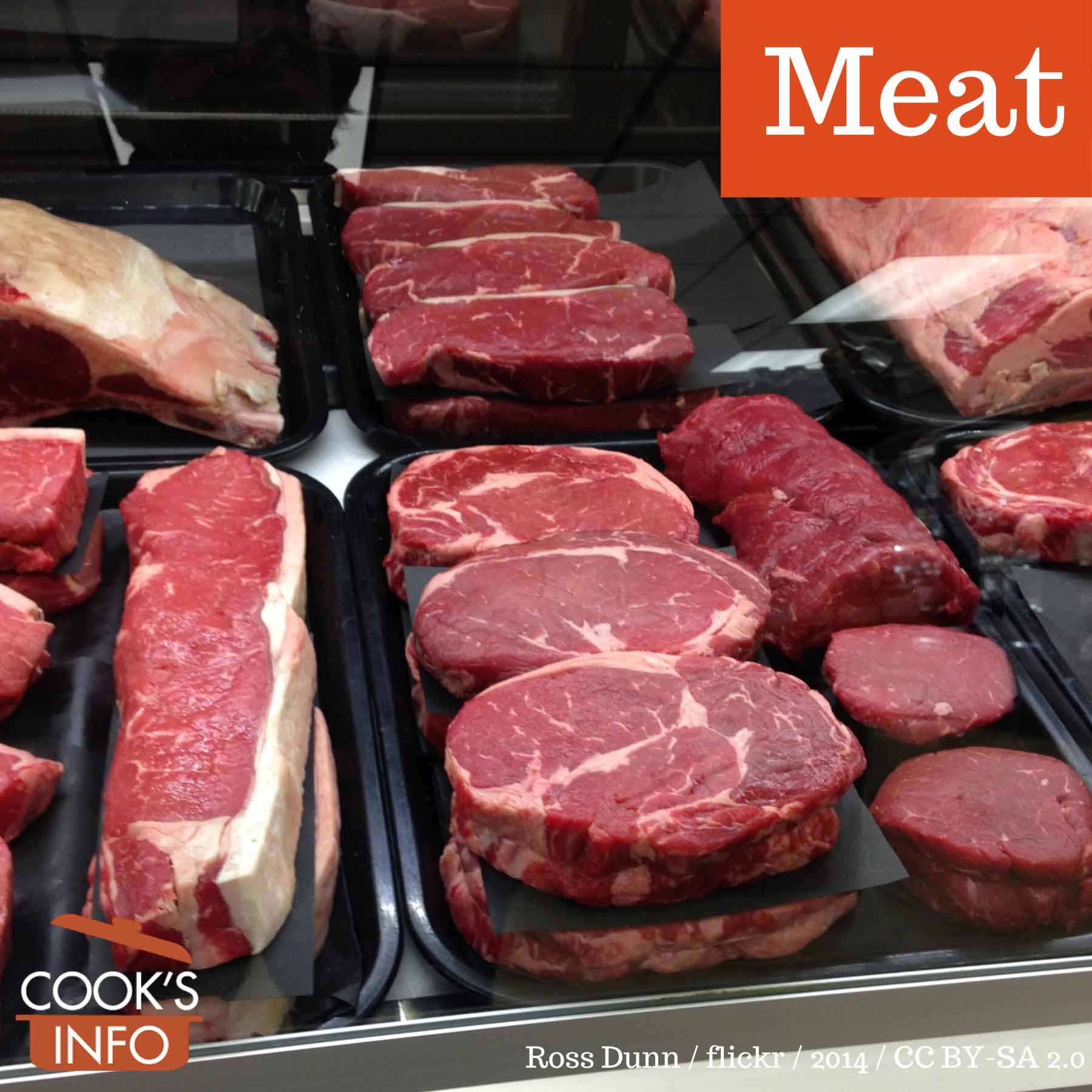 Meat is the edible flesh of animals. It consists of muscle tissue, fat and other tissue.

The inside edible portion of nuts is also referred to as “meat.”

Efficiency of meat production can be evaluated in many ways: quality, profit, nutritional value, environmental impact, etc. Another way to evaluate it is feed conversion efficiency, which measures the amount of feed needed to produce 1 kg of meat. [2]An overview of livestock farming. In: Explore How Farmers Produce Food Sustainably. University of Reading. Module 3.3. Accessed January 2021 at
https://www.futurelearn.com/courses/explore-how-farmers-produce-food-sustainably/4/steps/995605

The water footprint of meat

Among commonly-consumed meats in the West, beef has the highest water footprint; chicken the lowest. [3]Mekonnen, M.M. and Hoekstra, A.Y., “The green, blue and grey water footprint of farm animals and animal products”, Value of Water Research Report Series No. 48, UNESCO-IHE, Delft, the Netherlands. 2010b. Accessed August 2022 at https://research.utwente.nl/en/publications/the-water-footprint-of-food

In meat, connective tissue can surround the meat as a membrane, or be the ligaments and tendons that attach muscles to the bone. It is formed of either collagen or elastin (also known as “silverskin”.) Collagen will break down during cooking into a gel that helps to make cooked meat juicy. Elastin, however, is not affected by cooking: it will remain tough. Trim any away that you can see or get at before cooking

The various large areas of large animal are called “primals” — generally there will be about 6 to 10 primal areas in an animal, depending on whose butcher chart you are looking at. For instance, the hind quarters area of an animal will be a primal area. When the animal is cut up, a primal area is referred to as a “primal cut.”

Subprimals are smaller areas of a primal area. For instance, a primal area on lamb is called the shoulder. It is further cut into the subprimal groups called the neck, blade and arm. Subprimal cuts can sometimes be sold whole, for cooking for a crowd, but more usually they are cut further into smaller cuts called “retail” cuts. Or, the subprimals can be cut into larger pieces call “sub-subprimals”, and then shipped as is to a store butcher who will either trim it and sell it whole, or make it into retail cuts to suit the needs of his or her customers.

The naming of meat cuts can be very confusing to consumers, and that affects producers, because consumers will only buy cuts of meat that they can identify and know what to do with.

The confusion comes about through several reasons. In the 1970s, when various governments such as the American and Canadian governments tried Wage and Price Controls, the Price Controls would apply to several named retail cuts of meat. To get around them, butchers simply did the cut a little differently and gave it a new name and bingo, that cut of meat was no longer covered by the Controls.

Retailers and butchers also rename cuts from time to time to renew interest in a cut of meat, or come up with a new and sexier name that will enable them to price the cut higher. And finally, you have government regulators. In Canada alone, meat grading and naming policies, which were first created by the government in 1929, changed in 1947, 1958, 1972 and 1984.

Finally, in 1992, the Canadian Meat Council and the American Institutional Meat Purchasing Specifications decided to harmonize their naming systems, to reduce cross-border and domestic confusion. The two councils put out manuals to be used by producers and retail buyers. The manuals, which describe and identify standard meat cuts, index meat as follows:

Each standard meat cut is assigned a catalogue number within the appropriate range for that type of meat.

The catalogue is here: Institutional Meat Purchase Specifications (link valid as of April 2021).

When turning meat on a grill, never use a fork to turn it with. A fork pierces the meat and lets all the juices run out and down into the flames. Use tongs instead.

When testing meat for doneness with a meat thermometer, insert the thermometer into actual meat, not fat.

There are various ways to tenderize meat. The hard truth is though that certain tough cuts and types of meat are just better cooked in ways different from tender cuts of meat.

In general, cook low-fat meats, pork and chicken low and slow; cook high fat meats such as goose at a higher temperature.

Special butters (such as compound butters) are often served with grilled meats, because you can’t make a sauce from the drippings of a piece of meat on the grill: it all goes into the flames.

Paleo-diet advocates invite us to believe that humans evolved to a meat-centric diet. An examination of this proposal in National Geographic magazine suggested that the proposition is much more complex, if not simply inaccurate:

“Year-round observations confirm that hunter-gatherers often have dismal success as hunters. The Hadza and Kung bushmen of Africa, for example, fail to get meat more than half the time when they venture forth with bows and arrows. This suggests it was even harder for our ancestors who didn’t have these weapons. “Everybody thinks you wander out into the savanna and there are antelopes everywhere, just waiting for you to bonk them on the head,” says paleoanthropologist Alison Brooks of George Washington University, an expert on the Dobe Kung of Botswana. No one eats meat all that often, except in the Arctic, where Inuit and other groups traditionally got as much as 99 percent of their calories from seals, narwhals, and fish.

So how do hunter-gatherers get energy when there’s no meat? It turns out that “man the hunter” is backed up by “woman the forager,” who, with some help from children, provides more calories during difficult times. When meat, fruit, or honey is scarce, foragers depend on “fallback foods,” says Brooks. The Hadza get almost 70 percent of their calories from plants. The Kung traditionally rely on tubers and mongongo nuts, the Aka and Baka Pygmies of the Congo River Basin on yams, the Tsimane and Yanomami Indians of the Amazon on plantains and manioc, the Australian Aboriginals on nut grass and water chestnuts.

“There’s been a consistent story about hunting defining us and that meat made us human,” says Amanda Henry, a paleobiologist at the Max Planck Institute for Evolutionary Anthropology in Leipzig. “Frankly, I think that misses half of the story. They want meat, sure. But what they actually live on is plant foods.” [4]Gibbons, Ann. The Evolution of Diet. Washington, D.C. National Geographic Magazine. September 2014. Accessed April 2021 at https://www.nationalgeographic.com/foodfeatures/evolution-of-diet/

Clarissa Dickson Wright, of Two Fat Ladies fame, and Elizabeth, the Queen Mother were both guild butchers in England.

When reading figures about high a percentage of the world’s grain goes to produce 1 pound (around 500 g) of meat, and how inefficient that is, bear in mind that the grain used for cattle feed is not grain that people can or will eat. You can bet very little hard spring wheat, the kind that makes fabulous bread flour and commands high prices, gets shovelled into Bossie the cow’s feed bag. Cow corn is called cow corn for a reason.

The patron saints of butchers are: Adrian of Nicomedia, Anthony the Abbott, Bartholomew the Apostle, George, Lawrence, Luke the Apostle, Peter the Apostle and Thomas Bellacci.

There is a theory about why, in English, the words for many various meats are different from the names of the animals the meat comes from. The theory holds that it dates from the time of the Norman conquest.

The Anglo-Saxon names for the animals survived, such as “calf”, “cow”, “pig”, and “sheep”, as they were used by the servants, the conquered Anglo-Saxons, who were out in the barnyards raising the animals.

The words for the meats, which were eaten by the masters, the Norman conquerors, took on the French words used by those masters. Thus “boeuf” (beef), “veau” (veal), “porc” (pork), and “mouton” (mutton.)