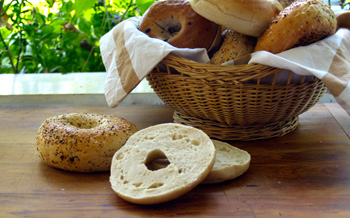 Bagels are chewy because they are boiled before they are baked: possibly the only bread that is made in this way, aside from some varieties of bread Pretzels.

Dough made with yeast is formed into rings and allowed to rise. When the dough has risen, the rings are dropped for a few seconds into boiling water, then baked. Before baking, some are brushed with sugar water, others with beaten egg. A good Bagel is both chewy on the inside and crusty on the outside — the boiling sets the stage for the crust on the Bagel when it is baked.

Nor do they like many of the generic Bagels now being mass-produced by the we-make-everything bread factories. Such Bagels, they say, are bloated, soft, crustless over-flavoured breads. The strong flavours now being sold — pesto, sun-dried tomato, garlic etc — are to mask the blandness of a bad Bagel, they maintain.

New York bagels are large, and soft, with salt and malt added to the dough.

Fans say that their quality has been going downhill since the 1960s, when cost-saving measures were introduced: techniques such as automated machines, dough conditioners, and steam-baking instead of boiling.

Before the 1960s, New York Bagels were very different. Making them was largely controlled by the “Bagel Bakers Local 338” union in New York, which imposed certain standards on the bagels. The finished bagels were much smaller than today’s (only about half the size, 2 to 3 ounces, 50 to 75g), and denser. They were made traditionally with high-gluten flour, salt, water, yeast and malty syrup.

Bakeries may partly have switched to the machines out of frustration with the union, as the union went on strike or threatened strike five times in 16 years from 1951 to 1967, often for one to two months at a time.

Whatever the reason, the reputation of Montréal Bagels has at least given Canada the edge over America abroad in Bagels: Bagels now being sold at in-store bakeries in Britain are called “Canadian Bagels.”

Many feel that Toronto Bagels are just a breadroll baked in the shape of a doughnut. If you’re going to have a Bagel, they say, have a Bagel. 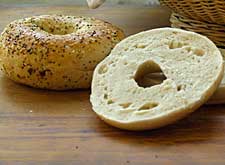 Some think that bagels evolved from a similar ringed bread-type roll in Poland, the “obwarzanek” which was mentioned in a decree in 1496 from King John Albert.

The first written mention of Bagels was in Krakow, Poland, in 1610. Though it later became popular amongst Jews, the Krakow community regulations at that time — which made the 1610 mention of the Bagel — specified that pregnant women should be given Bagels, with no mention of women of any particular religion.

The Bagel really took off, though, when it hit Chicago and New York. Bagels have been made in Montreal for hundreds of years using the methods described above.

Bagels have been made by bakeries in Brick Lane in Shoreditch, London since around 1850. Britain’s First & Best Beigel Shop (aka Aaron’s Beigels) claims to be the oldest, established in 1855.

Sometime in the 1920s, it was New York Jews who, in a flash of pure genius, had the idea of schmearing cream cheese onto bagels (which had never previously been done back in Europe.) And the rest is history.

“A Bagel creation that would have my parents turning over in their graves is the oat-bran Bagel with blueberries and strawberries. It’s a Bagel nightmare, an ill-conceived Bagel form if there ever was one.” — Ed Levine, in “New York Eats”.

In the TV series Seinfeld, the character Cosmo Kramer (played by actor Michael Richards) worked at the H&H Bagels shop at 80th Street and Broadway. The shop, which actually existed in real life, opened in 1972 and closed at the end of June 2011 when the owner Helmer Toro ran into tax troubles.

Though the word “Bagel” has its origins in old High German, many modern Germans are puzzled by what a Bagel is as the word travels back to Germany (via means such as Breakfast Bagels at McDonald’s.)

This web site generates income from affiliated links and ads at no cost to you to fund continued research · Information on this site is Copyright © 2023· Feel free to cite correctly, but copying whole pages for your website is content theft and will be DCMA'd.
Tagged With: Bread, Breakfast, Jewish, Jewish Food