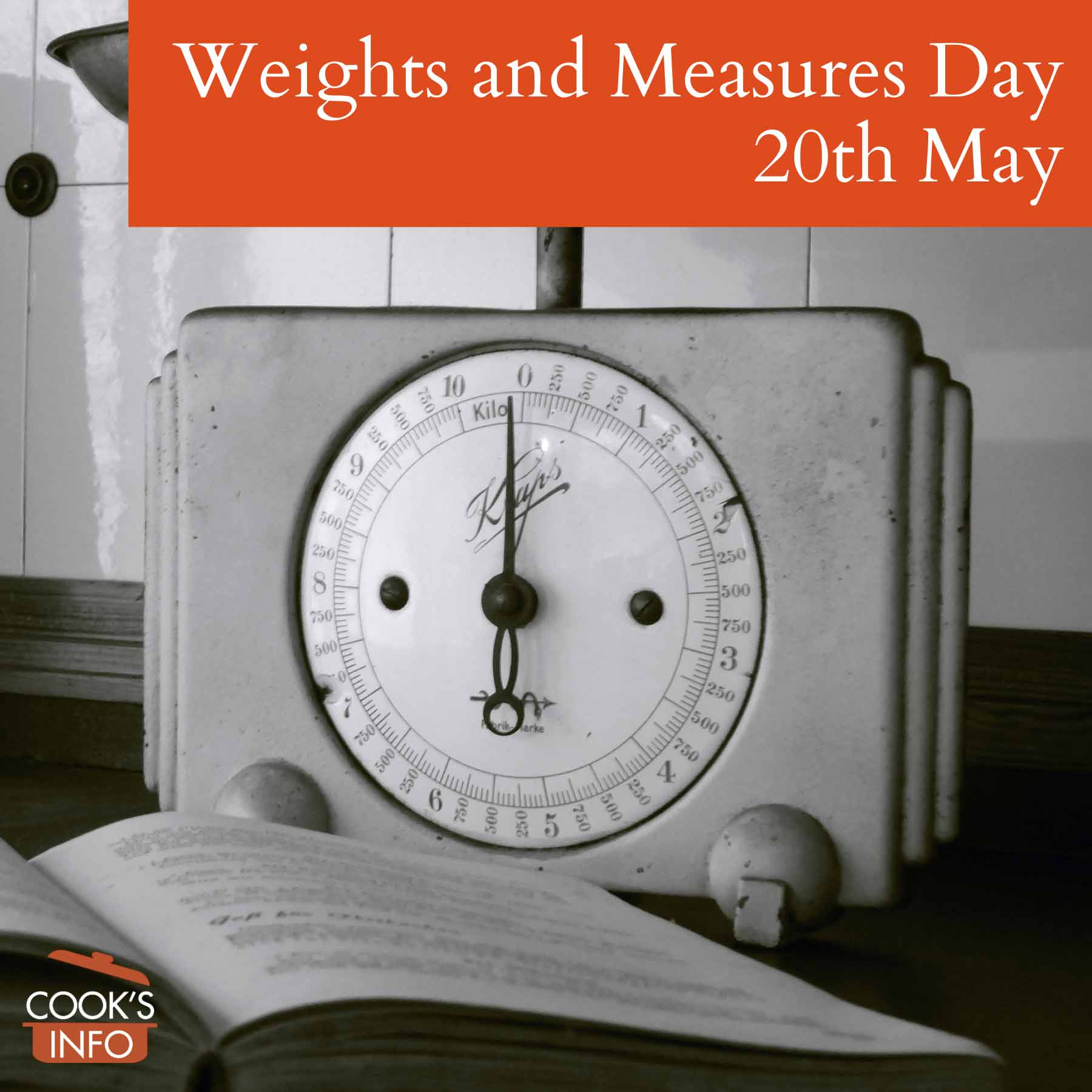 The 20th of May is Weights and Measures Day.

It celebrates how important units of measurement are to us. They are particularly important in the culinary world.

Weights and measures come into play when we plan the food we will buy, and when we actually buy the food, to ensure that we get the amount we intended to get, and that we paid for. They are also important back home in our kitchens for measuring ingredients while cooking. Some people also use them as well for portion control when eating. And finally, they are useful for weighing ourselves after we are done eating!

Agreed-upon weights and measures throughout history have made trade not only possible but far easier between cities, states, provinces, and countries. In the past, though, the multiplicity of varying non-standard measurement units added to the complexity of transactions.

Kitchen metric measurements in Canada and the United States are a bit of a mess, because committees in the 1970s decided to teach home consumers to measure dry goods in ml, which is actually reserved used for liquids. Yet, in the category of trying to be “plus catholique que le pape“, they also recommend giving ml where teaspoons and tablespoons would typically be used, while actual long-time metric countries happily use teaspoons and tablespoons for such small amounts in recipes.

The only official legal measurement system in the United States is actually the metric system — passed by Congress on 28 July 1866. As a compromise, it was made the legal measuring system of the land, but not mandatory. In 1893, the “Mendenhall Order” in the United States gave the legal definition of American pounds, feet, yards, inches, etc., in terms of their metric equivalents.

The Australian tablespoon stands alone in the world as being 20 ml. Everywhere else, it is 15 ml.

The tools of weights and measures in the UK and in North America are only inspected if they are for commercial use. Household ones are not, and the consumer has to ascertain for him or herself how accurate they are. And nor is there any legal requirement that a set of home scales be accurate

Conversion needs to be user friendly

Some people try to be too accurate when converting.

When trying to convert between American measurements and metric, some recipe writers who don’t know better, don’t care, or who are not willing to give much time to it, will give user-unfriendly amounts such as 454 g of something, a degree of precision which no ordinary mortal can hope to adhere to in a home kitchen. This is as absurd as telling someone to measure out 53/64th of a teaspoon of something in American measurements.

An awkwardly converted measurement essentially tells users of that measurement system that they are an afterthought.

Such writers need to give user-friendly, rounded numbers in the targeted measuring system, and if they feel that the rounding really triggers the need for adjustments, to then proportionately adjust corresponding quantities of other converted ingredients in the recipe.

To put it another way, a conversion given should be idiomatic for the language of measurements it is being converted into. In English, we can say, “hit the road”, but to convert that precisely into French as “frapper la rue” is both hilarious and of no use to the intended recipient of that conversion. In the same way, converting 2 cups to 500 ml or half-a-litre is useful; converting 2 cups to 473.176 ml is neither understandable nor useful.

People who sputter that a rounded conversion to metric is off by a micron are typically the same people who in another forum will boast that they never measure anything anyway and just cook by guesstimates as it is. And, they probably put way too much store in just how accurate their cup and oz. measuring jugs were to start with, even before any talk of conversions.

Weights and Measures Day marks the day in 1875 when 17 countries signed the Treaty of the Metre in Paris.

The treaty created the International Bureau of Weights and Measures (BIPM), which provides governments a framework in which to coordinate matters concerning units of measurement.

The headquarters for the International Bureau of Weights and Measures since 1876 have been in the Pavillon de Breteuil at 12 bis Grande Rue, Sevres, France, which is just to the west of Paris.

The first print mention that CooksInfo is aware of in print media for a Weights and Measures Day being popularly observed in May dates from 1980 in Los Angeles:

Young, Colin. Whose Day Is It Anyway? Weights and Measures Day. BBC Radio Shropshire. 21 May 2014. Accessed July 2021 at https://www.bbc.co.uk/programmes/p01ypptl