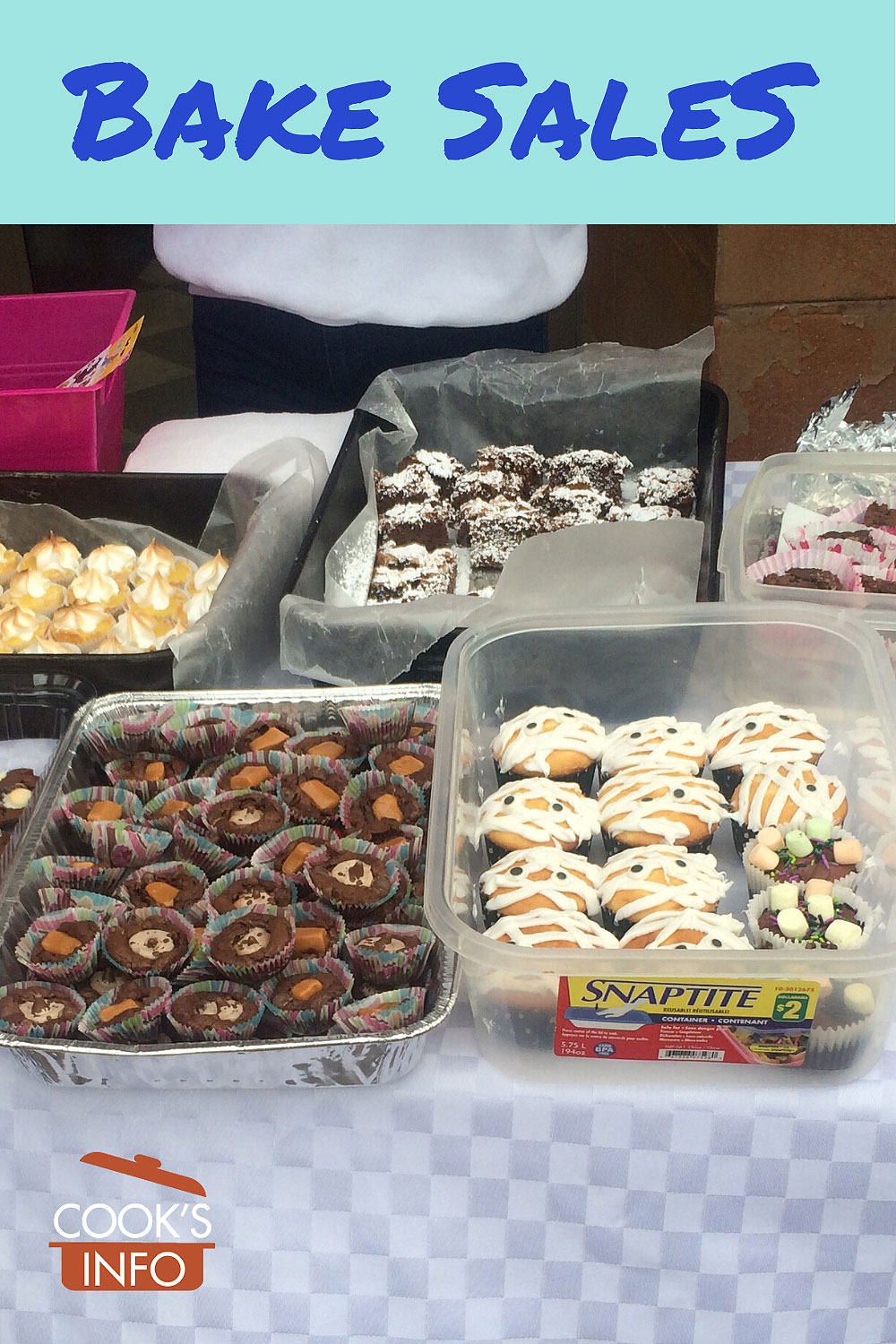 Bake sales (aka “baking sales”, “cake sales”) are events for which people donate items they have baked at home, with the purpose of raising money for a cause. The items are usually sweet, but more savoury items such as bread, sausage rolls in pastry and bottled condiments may also appear.

The bake sale tradition in many countries

Bake sales are a tradition in the United States, Canada, as well as in other countries such as England and Scotland, Australia, New Zealand, South Africa, Ireland, etc. “It’s rare that a Briton has not encountered a charity bake sale at some point in their lives. It’s become a tradition of village culture, an act of generosity that is tasty at the same time.” [1]Somerville, Ewan. Ban on charity bake sales by Women’s Institute campaigners at local hospice lifted. 16 August 2019. inews.co.uk. Accessed June 2020 at https://inews.co.uk/news/ban-on-charity-bake-sales-by-womens-institute-campaigners-at-local-hospice-lifted-327468 [2]In 2020, a writer for American “Eater.com” website incorrectly termed them “a uniquely American tradition”. McCarron, Meghan. Bakers Against Racism Is Just the Beginning. Eater.com. 18 June 2020. Accessed June 2020 at https://www.eater.com/2020/6/18/21295842/bakers-against-racism-bake-sale-instagram-movement-black-lives-matter

In England, they are often referred to as “cake sales.” (All kinds of baked are sold at “cake sales”, but there will almost always be cake involved.)  Tables are frequently staffed by members of the Women’s Institute to raise money for schools, hospices, hospitals, church missions, and other charities.

The social aspect of bake sales

Traditionally bake sales have been about more than just the money raised. They have been community-building events not without their share of human drama. They have given people a chance to work together, make friends and share recipes. They have provided the opportunity to show off one’s own talent, and decry the lack of it in others, and to find a great dessert that you can ferret out the recipe for and then claim it as your own.

And, there can be outrage, and hurt feelings, when people who have put a lot of time, effort and money into their baked goods see them flogged off too cheaply. To be fair, though, an organizer probably has no way of knowing how much a person spent on the ingredients that went into making a particular cake or pie.

Part of the pricing problem is that, from the other side of the baked goods table, people don’t expect to pay a lot at bake sales, particularly if they don’t know if a particular item will taste any good once they get it home. You can’t tell from looking at a pumpkin pie, for instance, if it’s too sweet for your taste. And, sadly, the quality of baking presented at a bake sale can often be uneven.

Over the decades, bake sales tables have reflected the evolving array of ingredients available but also the changing cuisines of North America. Items such as piroshki, samosas, etc, have appeared and become firm favourites in many regions. 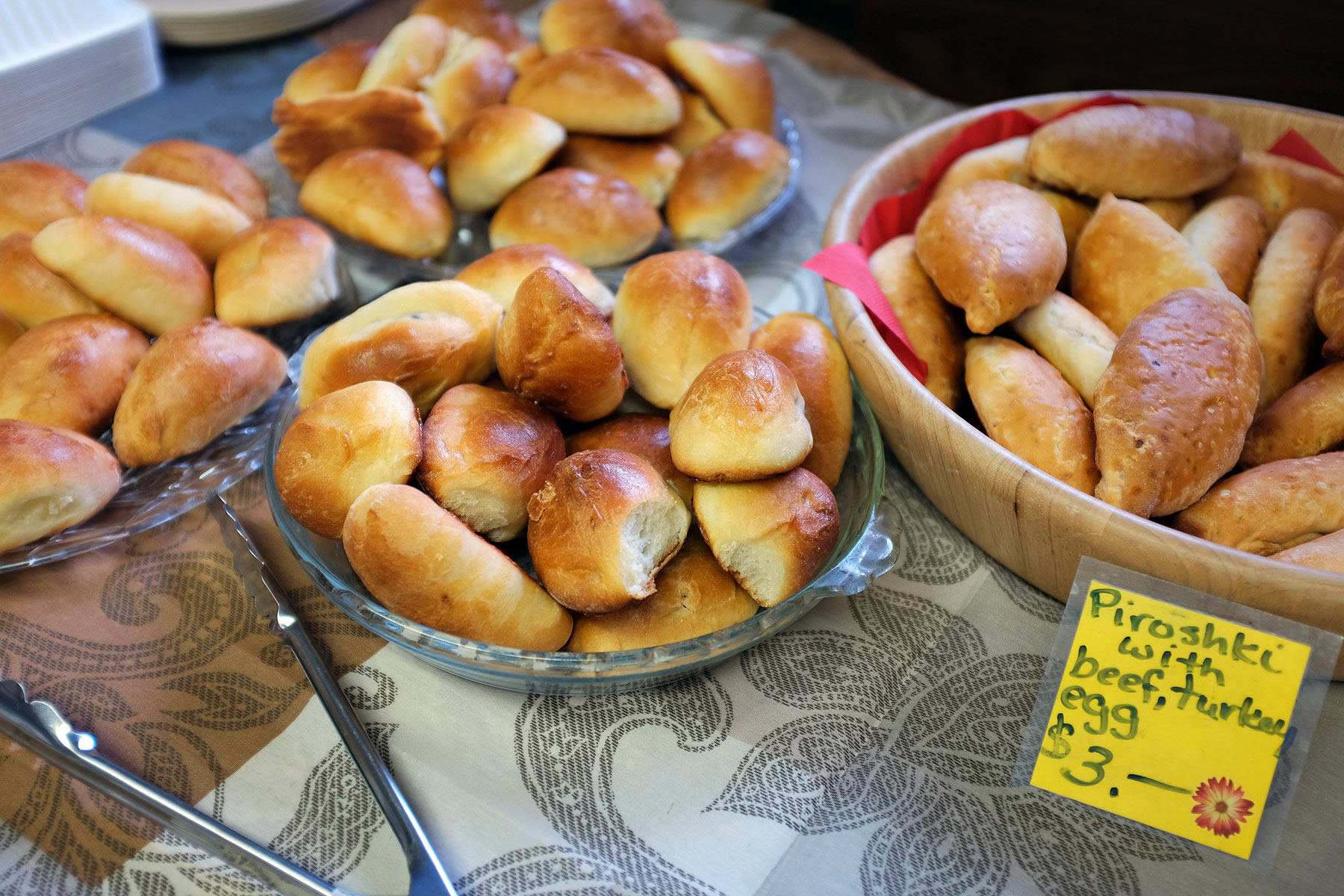 Is the basic premise of bake sales out of date?

The concept of bake sales may have some assumptions that are out of date. One is that commercially-prepared food is more expensive than the ingredients required to bake the same item at home, which is no longer necessarily true. It can now often cost more to make something than to buy it. Another is that people have more time to give than they have money. Some, depending on their political views, also question bake sales held to raise money for causes such as schools, which they feel the government should be entirely funding and not require any community involvement.

Still, given the cost of ingredients now to produce quality baked goods at home, some people argue that parents and other donors may well save money by just buying the stuff already made at stores, especially if the school or organization is going to sell off homemade baked goods for far less than it cost to make them. Others contend that they would be better off by just donating what the cost of the ingredients would have been.

That being said, there are still many who firmly believe that, whatever the economic reasoning one way or another, giving bought baked goods to a bake sale is beyond the pale. 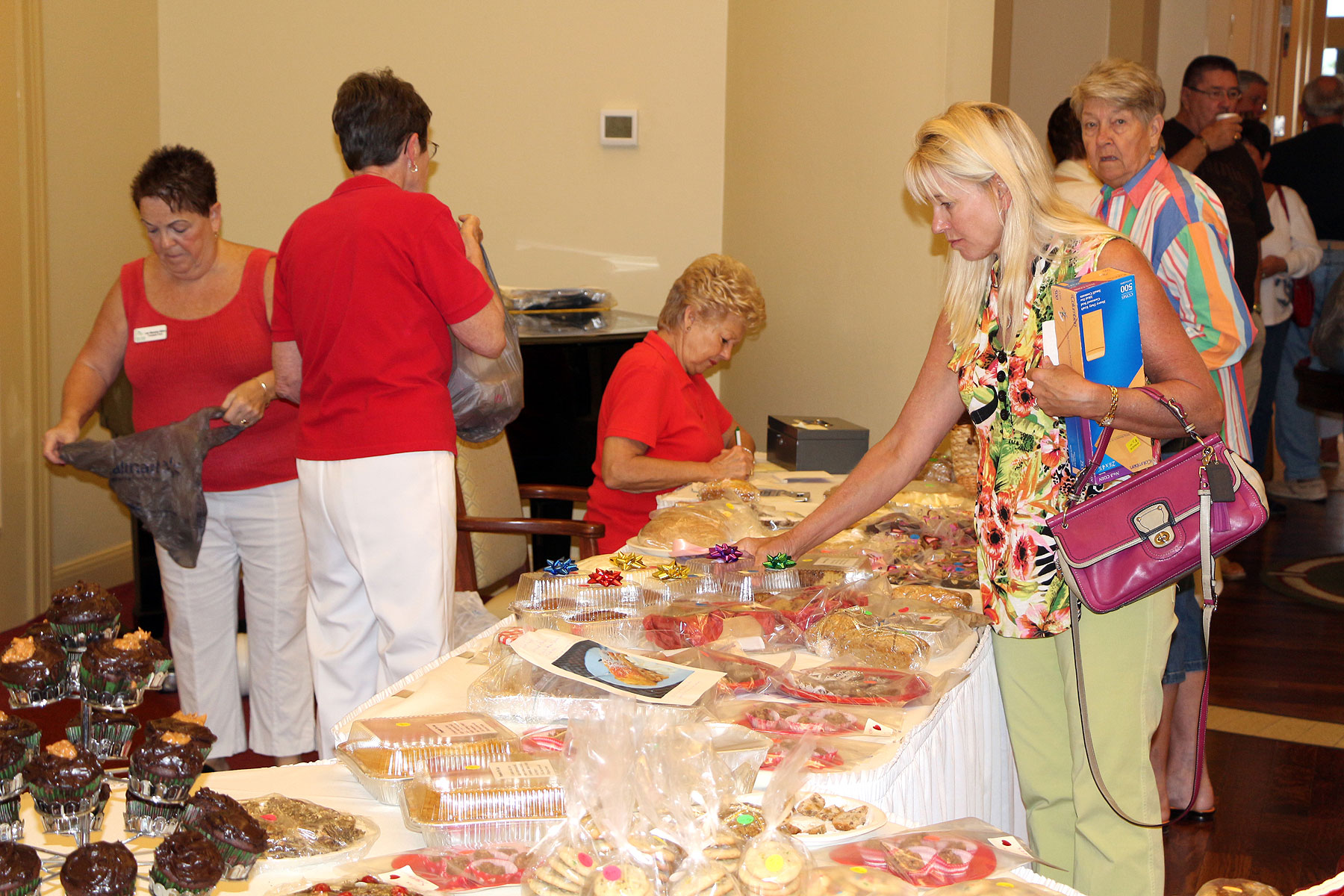 Some schools and organizations, though they are still holding baked sales, are now banning homemade baked goods out of health and safety concerns. Instead, the parents are expected to buy the baked goods from stores with packaging that fully details the ingredients. Many parents point out that the store bought stuff may be full of preservatives and ingredients with names that no one understands, and that if it has come to the point where a school is afraid of letting children eat their mothers’ cooking, perhaps they should just switch to another fund-raising idea entirely.

In May 2009, the City Council of Dundee, Scotland, banned home bake goods from school sales on health and safety grounds, despite the advice of the British Food Standards Agency (FSA): “Home-made cakes should be safe to eat, as long as the people who make them observe good food hygiene, and the cakes are stored and transported safely.” [3]BBC. Home baking ban at school fairs. 2 June 2009. Retrieved 2 June 2009 from http://news.bbc.co.uk/1/hi/scotland/tayside_and_central/8078591.stm

In August 2019, baked goods from Women’s Institute members for a bake sale at Loros Hospice [4]Leicestershire and Rutland Organisation for the Relief Of Suffering in Leicester, England were temporarily banned because their kitchens had not been inspected by the local healthy and safety authorities. The temporary ban was lifted after Women’s Insitute members pointed out that the baked goods were coming from many always varying kitchens, not just one or two, thus bypassing local council rules about regular kitchens needing inspection. [5]Somerville, Ewan. Ban on charity bake sales by Women’s Institute campaigners at local hospice lifted.

The best-sellers at bake sales seem to be items which are attractively presented. Cookies in a plain plastic bag will stay on the table; those in the same bag but tied with a ribbon or a bow will sell more quickly.

Also best-sellers are items sold individually, like a slice of cake or two squares. When sold in these smaller portions, people aren’t worried if they don’t like it, they’ll be stuck with too much of it. It also allows those watching their weight to know that they’ll be taking home a limited quantity of the item. 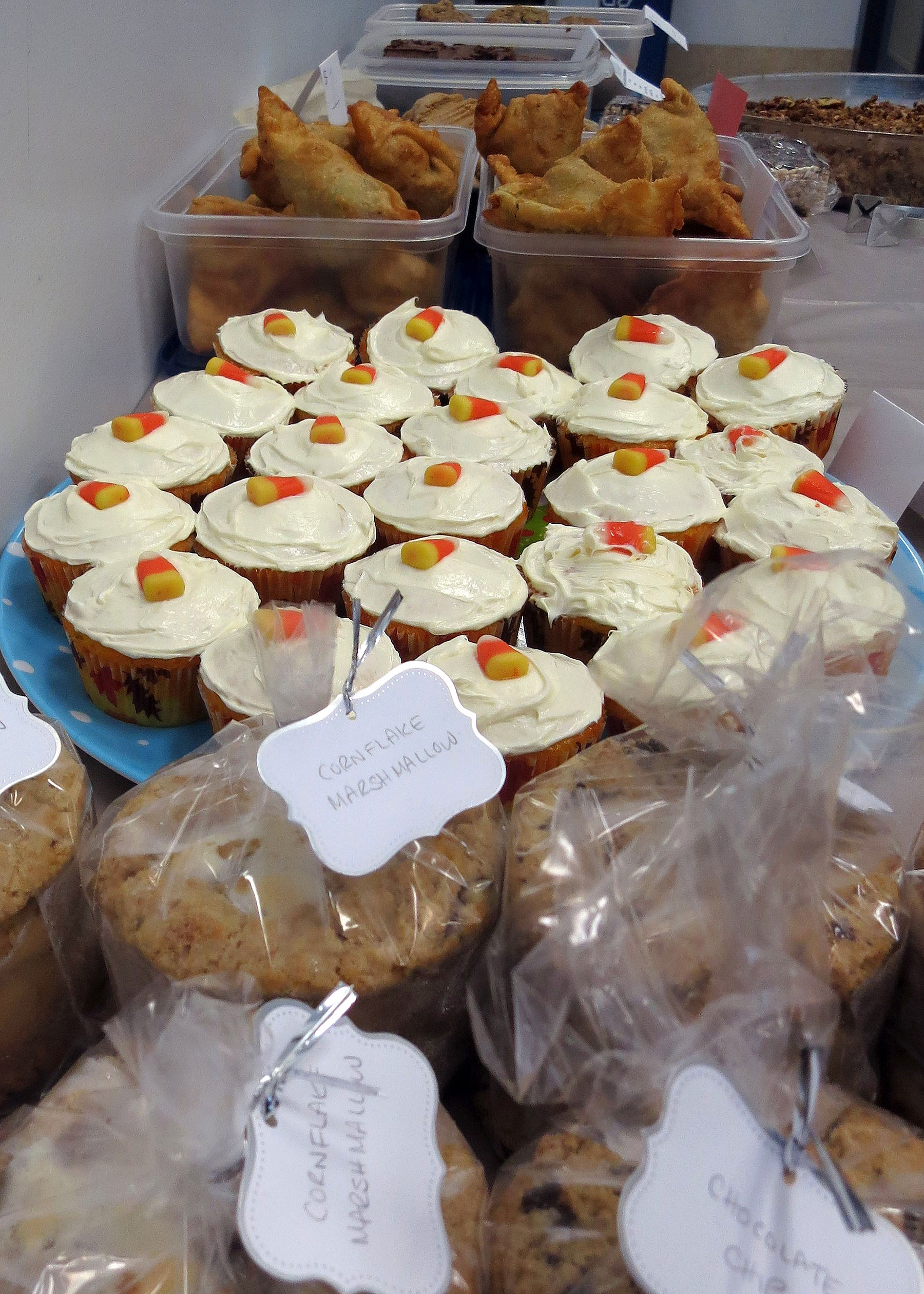 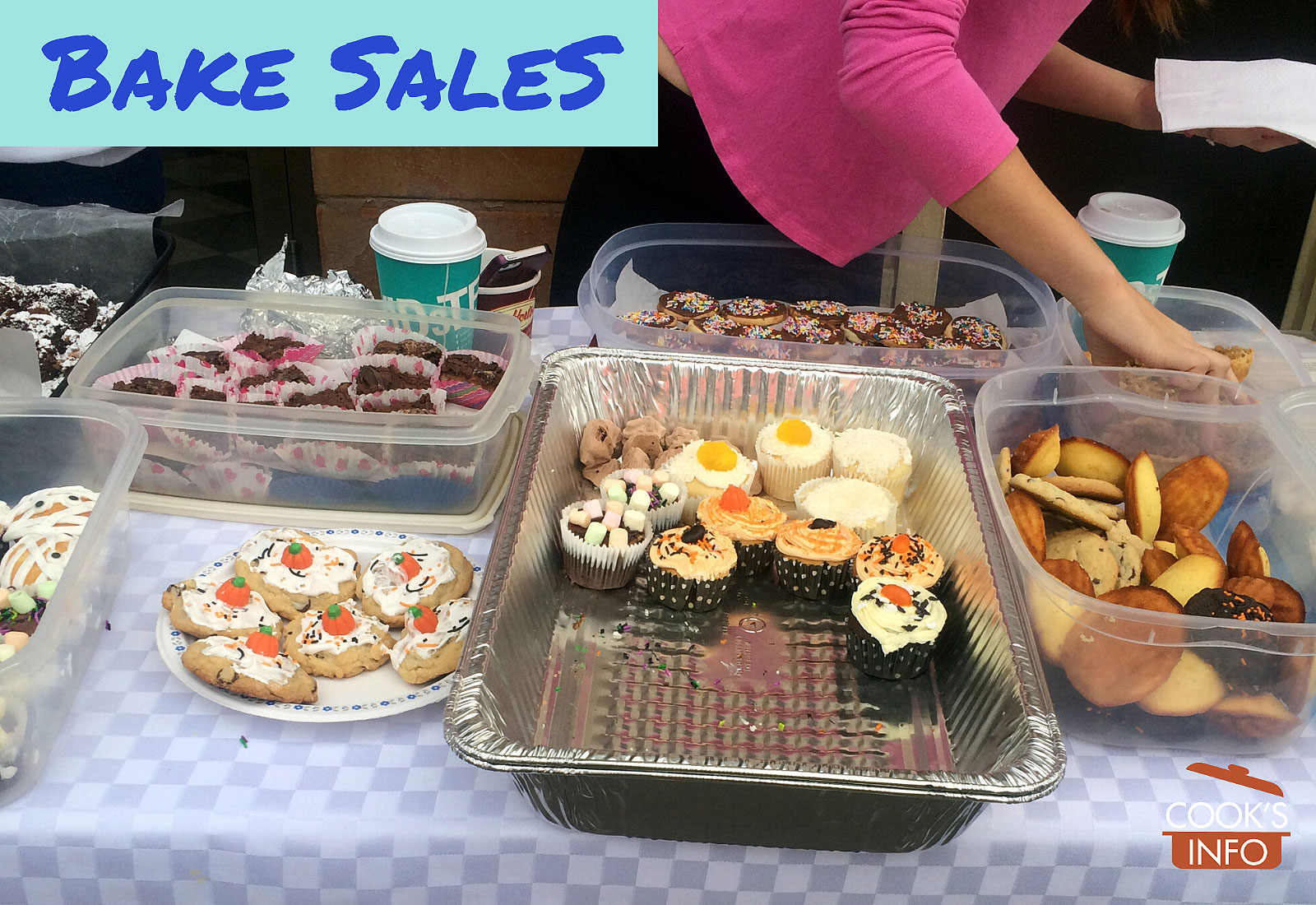 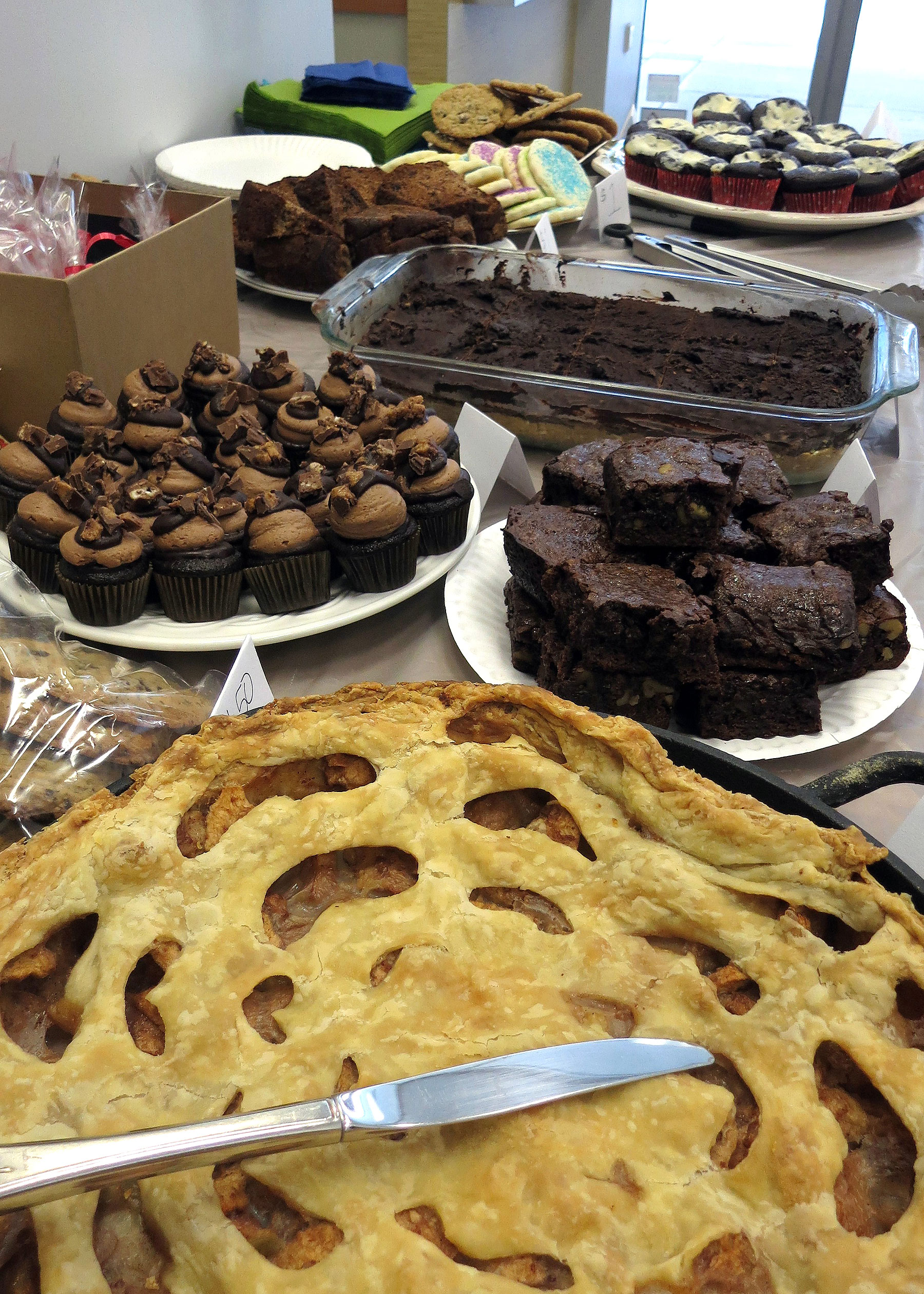 It’s not clear exactly when the “modern” definition of a bake sale came into effect, meaning baked goods donated by various people in order to beneficently raise money for a given cause, but they were very popular in English-speaking countries by the end of the Victorian era.

The oldest reference we’re aware of so far to a sale of home baking for fundraising dates from 1883 in the US state of Indiana.

In 1899, there was a “baking sale” in aid of the Young Women’s Foreign Missionary Society in Decatur, Illinois:

Here’s an example of one combining the sale of baked goods and aprons, presumably homemade as well, in England 1895:

“Cake and Apron Sale: A novelty in the form of a Cake and Apron Sale was held in the Church Rooms, Temple-square, on Tuesday afternoon and evening. The largest of the rooms were set apart for the different departments, which were well patronised. The cake sale was superintended by Miss Ridley, Miss Lepper, and Miss Grace; apron department, Mrs. and Miss Lowndes, the Misses Starbuck, and the Misses Parrott; tea room, the Misses Parrott. There was also a Girls’ Friendly Society Stall, containing fancy articles, of which Miss Drake and Miss K. Parrott were stallholders. The amount raised was £22:2, which is to be devoted to the funds of the Church Rooms.” — Bucks Herald. Buckinghamshire, England. Saturday, 30 November 1895. Page 5. 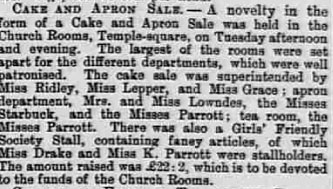 “On Monday, September 28th, an apron and cake sale will be opened at 3 o’clock by Mrs. Cranage, and a sale of produce, etc, at 7 o’clock, kindly conducted by A.M. Barbee, Esq. There will be a public tea at 5-30. Tickets 1s. each. Gifts for the sales will be gratefully received at the mission hall on Saturday, the 26th and Monday morning, 28th. The New Hall Mission, Wellington, Annual Harvest Festival.” — Wellington Journal. Shropshire, England. 19 September 1896. Page 5. 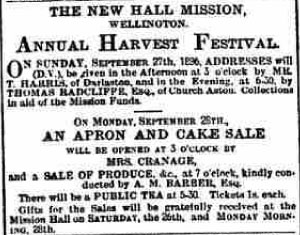 This sale combined baked goods with music recitals. It appears that at least some of the baked goods on offer might have been donated by a professional baker:

“Cake sale: An interesting novelty in the way of a cake sale was opened in the Town Hall, Chester, on Thursday afternoon, in aid of the Mickle Trafford Schools, by the Mayoress (Mrs. B.C. Roberts.)… There was a large and tasteful display of many varieties of cakes, etc. During the afternoon the following programme of music was performed: Song, Mr. E.S. Giles (with violin obligato by Miss Mary Hassel); piano solo, Miss L. Squarey; mandoline solo, Miss Gibbons Frost. Many of the cakes were supplied by Messrs. Bolland and Son.” — Cheshire Observer. Cheshire, England. Saturday, 20 March 1897. Page 8. 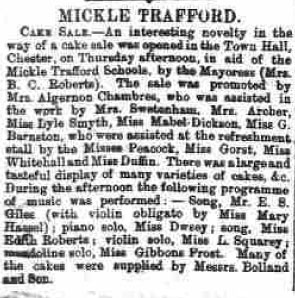 This web site generates income from affiliated links and ads at no cost to you to fund continued research · Information on this site is Copyright © 2022· Feel free to cite correctly, but copying whole pages for your website is content theft and will be DCMA'd.
Tagged With: Meal Types