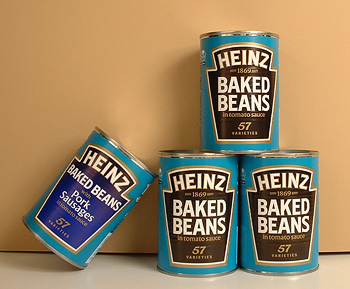 Baked Beans is a dish made from dried beans, which have been boiled to soften and cook them. The beans are then put into an oven-safe vessel, covered by a sauce, and baked at a low temperature for several hours to cook the sauce and allow its flavour to infuse the beans.

The dish is generally made with navy beans, though in the New England part of America other heritage type beans such as Steuben Yellow Beans (aka Yellow Eye), Trout Beans (aka Jacob’s Cattle) and European Soldier Beans are also used.

American and Canadian Baked Beans will generally have salt pork, or fatty bacon, and molasses or maple syrup in them. Commercially, the beans may be referred to as Boston Baked Beans, Beans with Pork, or Pork and Beans. The piece of fat adds mouth feel to the dish. Lean pork or ham would not achieve the same purpose. In 1996, the American Food and Drug Administration ruled that “it has for years been recognized by consumers generally, that the designation ‘beans with pork,’ or ‘pork and beans’ is the common or usual name for an article of commerce that contains very little pork.” [1]

Baked Beans elsewhere in the English-speaking world, as well as Germany, etc, use a tomato sauce instead of molasses.

In Britain, as of 2010, consumers each over 1.5 million tins of baked beans a day. More Heinz beans are sold in the UK than in America (in America, the top-selling brand is Bush’s Baked Beans, as of 2011.) In the UK, the baked beans are made on a 55-acre site opened in 1959 in Wigan, Greater Manchester, which processes 50,000 tons of raw beans each year to make the baked beans.

Heinz uses Navy beans in its baked beans. The dried beans first go through filtering machines, that reject beans whose size or shape doesn’t meet standards, then the beans are par-cooked to get the right texture that seems so hard to get when making at home, then they go through a wash to remove any loose skins, then, pass along a conveyor belt for final inspection by laser. The correct amount of beans are put by machine into a can, followed by the hot tomato sauce. The cans move along a conveyor belt, which passes them through the final stages of cooking, cooling, labelling and packing for shipping.

The tomato sauce is made from Heinz tomato purée, sugar, salt and spices. Heinz grows the tomatoes itself in the Mediterranean. The tomatoes are processed into purée right there, and shipped to the plant in England in large plastic bags. The beans used are brought in from America and Canada in large, bed-size sacks. The steel-coated tin cans are made by Heinz itself.

Molasses sauce fans say that British-style baked beans in tomato sauce can’t hold a candle to the complexity and flavor of New England baked beans, with their hints of molasses and salt pork.

One of the most common failings in making Baked Beans is not boiling the beans enough first. They won’t cook anymore once you assemble the recipe, so make sure they are truly tender before you start. After a few hours of boiling, take one or two out of the boiling water, let cool a minute, then put in your mouth and try to mash it with your tongue to gauge how tender they are. If you’re uncertain, boil more.

The earliest American cookbooks list recipes for boiled beans, but not baked. Either the colonists may have picked up the idea of further cooking beans by baking from the Indians, or sailors returning home to New England may have picked up the technique from North Africa or the Spanish Jews, who made “Sabbath beans” (Baked Beans that could be made ahead and reheated on the Sabbath.)

It is certain, though, that man has been baking beans for millennia. Bangalore in India is an anglicized version of ‘Benda Kalooru’, meaning Baked Beans. The story is that a king, Veera Ballalla, become lost and famished during a hunting trip in 1120 AD. An old woman in the forest fed him Baked Beans, and he later built a town on the site and named it “Baked Beans” (though some sources say it may actually refer to “boiled beans”.) Boiled or baked, you do well to be sceptical of food legends so old that have so much detail — most of them are, well, full of beans.

Baked Beans became very popular in New England and especially Boston. Very observant puritan women would make them ahead on Saturday, so that they could avoid cooking on Sunday, the Christian Sabbath.

Despite what you may read elsewhere, it is unclear who marketed the first tinned Baked Beans, but it seems certain that it was in America.

In 1895, Heinz began making its Baked Beans, baked, then packed into tins with tomato sauce by an automated canning line. In 1901, the prestigious London food store Fortnum and Mason agreed to carry Heinz Baked Beans (they were already carrying other Heinz products.) The store still carries the beans to this day. By 1928, Heinz had to set up a factory in Harlesden, England to keep up with the demand for his beans.

In 1967, Heinz introduced the slogan, “Beanz Meanz Heinz.” It was created by Maurice Drake over a beer and sandwich lunch in a pub near Victoria Station in London. In 2012, Creative Review magazine named it the top advertising slogan of all time.

In 1999, Heinz UK introduced the easy-open pull-top lid on their cans of Baked Beans. The turquoise used on Heinz Baked Beans tins in the UK is trademarked.

In 2010, on the heels of complaints that Heinz Baked Beans sold in Austria had a thinner sauce, and fewer beans per tin than its UK counterpart, the formula was changed to use the UK recipe. The tins of beans for sale in Austria are made in Germany, and had been using a variant recipe. [2] 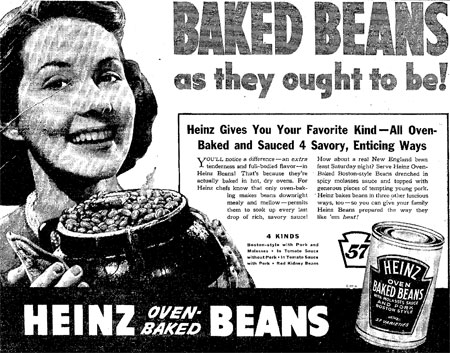 Parker-Bowles, Tom. Beanz meanz…a production process that would make even an SAS soldier blanch like a haricot bean. London: Daily Mail. 22 May 2010.