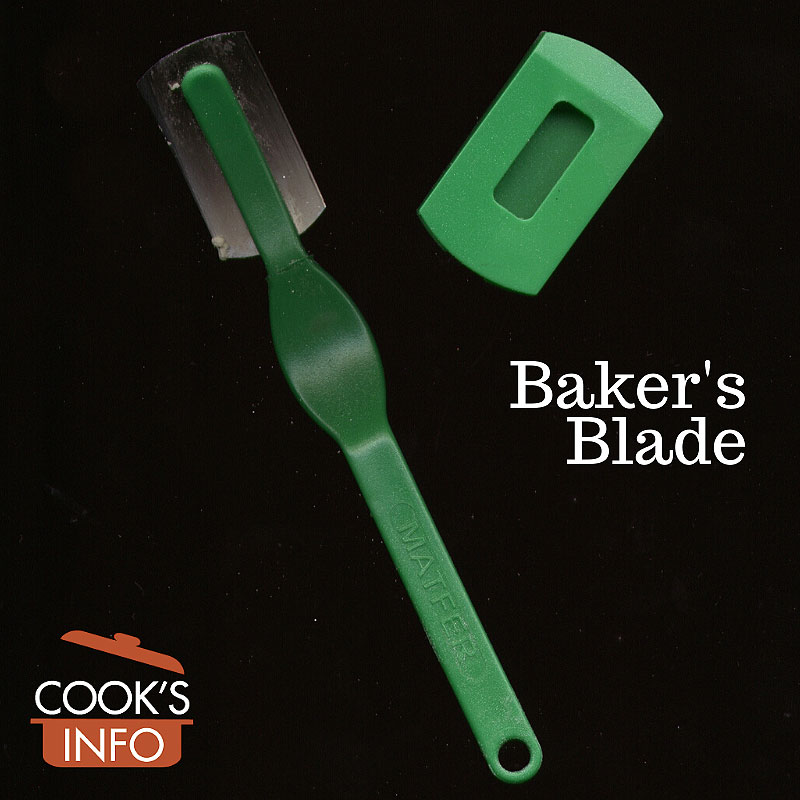 A baker’s blade (aka lame, pronounced “lahm”) is a sharp cutting implement used to make decorative slashes in bread dough without pressing the dough down and deflating it.

The classic design of one brings to mind a small rubber spatula. It has a plastic handle, about 12 cm (5 inches) long. At the end of the handle is a broader metal blade, about 4 cm (1 ½ inches) long. The sharp, curved edge of the blade is what will put off any ideas of using this as a spatula.

The curve in the blade allows precision-shaped cuts to be made. The purpose of making the cuts is to allow steam to escape in “designated places” from the loaf while cooking, so that irregular cracks don’t form in the top of the loaf. In effect, by providing the cracks in advance, you are following the old “get in front of it and make it look like a parade” principle. The process of slashing it is called “docking” the loaf.

Though not all baker’s blades allow the actual blade parts to be replaced, many do. You detach the blade from the handle, and replace it with what looks like a stainless steel razor blade. To put a new blade in, you press the blade slightly at each end to curve it, then insert it into the blade-holder on the handle, then release the blade slowly.

Most come with a protective cover that goes on the blade in storage.

There are also now other designs of cutting implements being sold labelled as baker’s blades.

Exacto knife, or a very sharp knife with a thin blade.

“Scoring the dough—slashing its top with a lame or razor blade just before baking—isn’t just for decoration; it helps control the expansion of the loaf during baking and directs the cracking that would otherwise occur naturally. How deep to score the dough depends on how the dough proofed. If your loaf is properly proofed, apply about the same pressure you would use to write on a piece of paper with a pen. If your loaf is a little underproofed and could use a boost in the oven, score it more deeply. If your dough is too supple or has overproofed, score lightly, barely marking it (in this case, the scoring is mainly for looks and has little to do with expansion).

With its curved double-sided blade and handle, a lame makes scoring easy. You can score whatever design you like into the top of your loaf… But no matter how you score the loaf, do it with confidence; if you hesitate, the blade can catch and rip the dough instead of making a nice, neat cut. As with most things concerning bread baking, the more you do it, the better you will become.” — Poilane, Apollonia. The Secrets of the World-Famous Bread Bakery. New York: Houghton Mifflin. 2019. Pp 48-49.

A baker’s blade is also called by its French name, “lame”, which is pronounced “lahm.”

Here is a video from King Arthur Flour on using a baker’s blade.

This web site generates income from affiliated links and ads at no cost to you to fund continued research · Information on this site is Copyright © 2022· Feel free to cite correctly, but copying whole pages for your website is content theft and will be DCMA'd.
Tagged With: Bread, French Breads